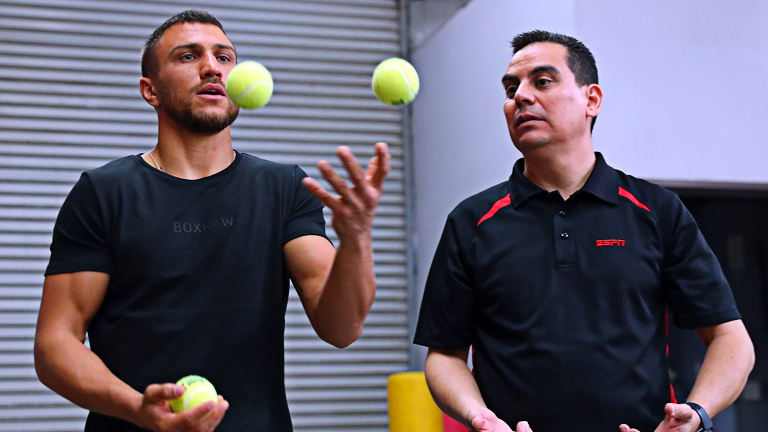 Luke Campbell finds himself in the unenviable position of trying to solve the Vasyl Lomachenko riddle in London on August 31, writes Elliot Worsell

WE know reality and fantasy are very different things, but Luke Campbell will today be forgiven for ignoring the difference as he celebrates securing home advantage for his second world title shot.

The fantasy: On August 31, at London’s O2 Arena, Campbell will get a shot at the WBA, WBC and WBO world lightweight titles, having strung together three straight wins, including a revenge victory over Yvan Mendy, since losing to Jorge Linares in 2017.

It is a shot he probably deserves; one he has patiently waited for. Not only that, at 31 years of age, he is seasoned and mature now, prepared for it in a way he perhaps wasn’t when boxing Linares for the WBA version two years ago. He has learnt from setbacks. He has been buoyed by successes.

In fact, six years into his pro career, Campbell has never been better and the timing of his world title shot could not be any better. Best of all, the shot arrives in England, at home, meaning he won’t have to travel the way he did in 2017. More than one reason to celebrate, then.

But now for the reality: Campbell, if he is to become world lightweight champion on August 31, must somehow defeat Vasyl Lomachenko, arguably the finest boxer in the sport and someone opponents fight while aware of the probable outcome and therefore find themselves more concerned with nailing the right time to ask the Ukrainian wizard for a post-fight selfie.

Superior to his peers in every conceivable way, Lomachenko ruins dreams before they even get going and has challengers feeling as if a title shot is not so much a reward as punishment. Campbell knows this. He has eyes. Not eyes like Lomachenko but eyes all the same.

Yet, despite all this, the Hull man will tell himself he can do it. He will convince himself he is different to the rest and that the stars have aligned, and he will read from the same well-thumbed script as all the others.

“He (Lomachenko) is ranked number one pound-for-pound on the planet so for me to fight a guy like that only encourages me to be the best I can be, and it is exactly the level that I want to be at.

“I think that I can knock out anyone that I hit right. I believe I am one of the biggest punchers in the lightweight division. This is going to be the toughest fight of my life and I’m preparing for it, physically and mentally. This is Luke Campbell’s year. It’s my time.”

Chances are, you can go back and find similar pre-fight quotes issued by Anthony Crolla, Jose Pedraza, Jorge Linares, Guillermo Rigondeaux and many more. They, like Campbell, had the same kind aspirations and the same need to suspend disbelief. Some knew what they were letting themselves in for, while others were ignorant to it. Either way, they initially said all the right things, conscious of the fact that once they got near Lomachenko, their pre-fight quotes would be the only aspect of the fight over which they had any kind of control.

Campbell, 20-2 (16), could be different. Who knows? Just as he must suspend disbelief, we too must look at his plus points, invest in the dream, and somehow imagine Lomachenko not as a faultless fighting machine but a human being whose demise could be just one punch away.

To this end, Campbell’s extensive and excellent amateur career will stand him in good stead next month, as will his long, rangy, technical southpaw style, and his ability to box from the outside, pick up points, and avoid danger. He is certainly not, stylistically speaking, a Lomachenko wet dream the way Anthony Crolla was, for example. He has habits, tricks and tools Lomachenko would rather he left behind. He has a boxing brain astute enough to solve riddles.

Does this mean he will win? Not quite. But the inevitability of Luke Campbell’s defeat is nowhere near as great as it has been with other Lomachenko opponents. And that’s something at least.

“This is a fight for history because my goal is to unify all of the belts in the lightweight division,” Lomachenko, 13-1 (10), said. “Luke Campbell is the next challenge for me on that journey. He is an excellent fighter who I remember well from the 2012 Olympics. He has a difficult style, and I cannot afford to overlook him.

“It is very special for me to fight in London. I visited last year and the response from the people was overwhelming. They respect my fighting style and are passionate about boxing. I can’t wait to put on a great show for everyone.”

It’s probably safe to say Lomachenko’s trip to the UK is not an attempt to bring a great champion over here for him to be dethroned in a bearpit baying for blood. We have seen examples of this in the past and, when they get it right, it’s often a masterstroke on the part of the promoter. Odds in their favour, the British challenger receives home comforts, some generous officiating and bespoke scorecards designed to deliver the result a sold-out arena crowd paid good money to hear at the end of their night. Save for the visitor, everyone goes home happy.

But no, this is different. In this case, the feeling is that Lomachenko is being shipped to the UK in order to showcase his talents to a new audience, a fresh market. It will be his first appearance on British soil since lighting up the World Series of Boxing in 2013 and he’s bigger and better now. He is this time being brought over to educate, to delight, and to sell tickets and pay-per-views, every one of which will be snapped up not because Luke Campbell is fighting Vasyl Lomachenko but because Vasyl Lomachenko is fighting at ten o’clock, UK time, on a Saturday night. It’s a rare, close look at a master at work. It’s why he will walk a red carpet, not the plank.

As for Luke Campbell, it’s his job to be remembered not as Vasyl Lomachenko’s compère but as a brilliant world title challenger and to cause the shock of all shocks. He must do it for himself, not a selfie. We wish him luck.