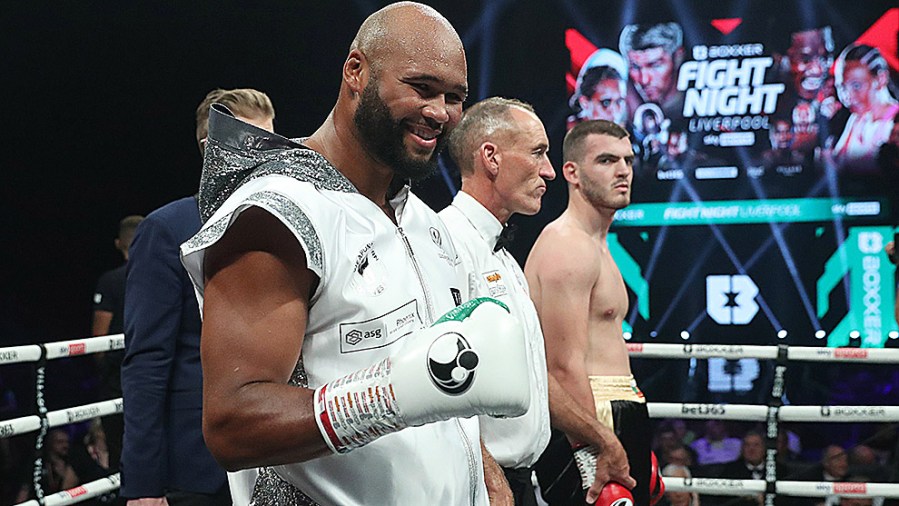 Heavyweight Frazer Clarke moved to 3-0 tonight in Liverpool but would end up apologising to his opponent, the crowd, and anyone else who had the misfortune of watching it, writes Elliot Worsell

IT has been a good few weeks for Frazer Clarke in terms of winning over the British public with his honesty, but, sadly, a disappointing few weeks in terms of his own career progression.

Last month, of course, while covering Antony Joshua’s second defeat to Oleksandr Usyk for Sky Sports, Clarke covered himself in glory when given the unenviable task of being the first pundit to discuss not only Joshua’s third pro loss but, more importantly, his post-fight breakdown. It was a moment that in the hands of lesser men could have been fumbled, dropped completely, or simply handled with the kind of insensitivity that would have only compounded matters.

Yet Clarke, an inexperienced pro but a mature man of 31, dealt with the situation with some aplomb, using his relationship with Joshua not to provide unwarranted praise or a skewed retelling of history but to instead speak from the heart, with insight.

Plenty would offer their view of what had happened in the coming minutes, hours, days and weeks, but it was Clarke who was first up to bat and, not just that, he was the first to mention two key issues that would have been easy to deflect, if not ignore completely. He was the first person to mention the word concussion, a factor obvious to anyone watching with an awareness of the signs, and he was also the first person to bring up the need for Joshua’s team to try stopping him go to places his frazzled mind wasn’t in that moment aware he was about to visit.

Speaking like this would not have been easy for Clarke. But you could tell it was important for him to do it and, in doing it, he distanced himself from the other pundits, displaying a level head and no small amount of empathy.

Tonight, meanwhile, Clarke was back to taking care of his own business and in pro fight number three in Liverpool (September 3) he took apart the horribly overmatched Pencho Tsvetkov, now 7-1 (5), inside a round, a result as disappointing for Clarke as it was for all who had the misfortune of watching it. Over before it had really begun, Clarke greeted the victory the same way he had greeted pro win number two back in July. He greeted it with a shrug. He raised not his arms but his eyebrows.

What he didn’t do, quite refreshingly, was delude himself, vault the top rope, or perform a backflip. In fact, Clarke’s most impressive performance of the night would come in the aftermath, when he had the good sense and honesty to deliver the harshest and most necessary critique of his own fight.

“I’m fuming, sitting here,” Clarke, now 3-0 (3) at heavyweight, said. “First of all, I want to apologise to everyone who came and paid good money to watch me. People have travelled up from Burton and all over the country and that’s just not acceptable. It’s not my fault. There’s nothing I can do about it. People have got to do better. It’s as simple as that really.

“I apologise to the opponent. He shouldn’t be in the ring with me. It’s dangerous. It’s done now, we both got out safe, but I can’t take that no more.”

As impressive as it was to hear Clarke speak so openly about this issue, what made it all the more impressive was that he did so while sitting alongside Ben Shalom, his promoter and the one partly responsible for what we had all been forced to endure, Clarke included. It was therefore not just an apology to the people who had seen what had unfolded in the arena and on Sky Sports but also a plea to his promoter to do better in the future, which, to his credit, Shalom said he would, starting in October.

“It was embarrassing,” he said, having listened to Clarke. “He’s (Tsvetkov) unbeaten, but I have to condemn it. I’m annoyed I even had to pay for it and I’m annoyed people had to watch it. He’ll (Clarke) be out very quickly, it’s no skin off his nose. He’s had an easy night’s work and he’ll be out again. But it shows levels and he’s a top-level heavyweight and that wasn’t good enough, to be honest.”

It wasn’t just Clarke vs. Tsvetkov, however. That was no anomaly or exception to the rule. Instead, disappointingly, this was just the latest in a growing number of mismatches taking place on Boxxer/Sky Sports shows and, Shalom is right, they really must try to do better.

While, in the main, their headline fights have been decent, their undercards typically leave a lot to be desired and, because of this, the way prospects are being built doesn’t appear conducive to a smooth transition to championship level. More than anything, though, there is nothing remotely watchable about these kinds of blowouts, all of which drag the viewer kicking and screaming towards what is usually a compelling main fight.

The grating music they insist on playing throughout their events, not far off the heavy metal used in Guantanamo Bay, can only do so much of the heavy lifting. Worse, in fights like Clarke’s one, and in the Adam Azim fight before it, this nonstop soundtrack, which is for some reason played in between rounds and as soon as the fight finishes (why, exactly?), acts as a timely reminder that style often trumps substance and that if you shout loud enough there’s every chance nobody will pay attention to what is actually going on.

In other words, it’s jarring. It’s unnecessary. It’s distracting. But, on reflection, maybe that’s the point.