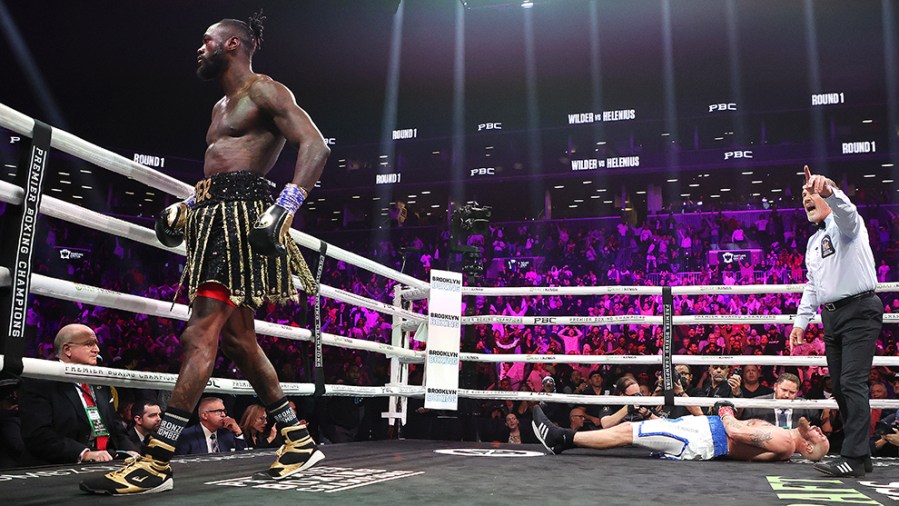 Robert Helenius became the latest heavyweight to fall foul of Deontay Wilder's right hand, the sight of which will have made matching Wilder even tougher next year, writes Elliot Worsell

PERHAPS the scariest thing about Deontay Wilder’s latest knockout, other than the fact it left yet another opponent horizontal on the ring canvas with their eyes wide open, is that it was inflicted upon a man who had previously shared a ring with him, albeit in sparring, and therefore knew exactly what to expect.

Even with prior experience, however, Finland’s Robert Helenius still found himself stunned and demolished by a Wilder right hand in Brooklyn, New York on Saturday night. Even though he knew precisely what was coming, and he believed he knew how it would feel, Helenius, like so many before him, soon understood that the difference between sparring Wilder and fighting Wilder is stark, as is the difference between Wilder’s power and the power of the rest of the heavyweight division.

It was a lesson Helenius learned the hard way and one, like the right hand that wrecked him, he never truly anticipated. If he had done, we would have seen a more reticent and wary Helenius as opposed to the one who looked to take the fight to Wilder on Saturday; one who was maybe banking on Wilder being rusty having not fought for a year. Moreover, had Helenius been afraid of Wilder or at least deterred by the experience of previously sparring him, the fight-ending right hand he copped in the very first round would not have been a punch he received when galloping on to it, as was the case in Brooklyn.

Indeed, that sequence of events – the image of Helenius, full of early positivity, rushing Wilder in the hope of putting him under pressure only to just as soon be disconnected from his senses – said so much about the experience of being in the “Bronze Bomber’s” firing line. For one, it showed how quickly things can change; how quickly, that is, an opponent can go from ambition to devastation in the blink of an eye. It also showed that nobody, not even men who feel they have tasted it before, can have any sense of how damaging and impactful Wilder’s power, especially in his right, is until they themselves have come into contact with it on fight night in 10-ounce gloves.

Because I’ve no doubt if you had asked Robert Helenius before the fight he would have spoken confidently about his ability to soak up this power and make it beyond the first round. To back himself up, he would have then probably pointed to his earlier sparring sessions with Wilder as evidence, and he would have mentioned that Tyson Fury, Wilder’s nemesis, had twice managed to weather the early Wilder storm to ultimately overwhelm him and suffocate him past the midway point. Those results provide the blueprint, he might have said, not only for Helenius himself but future Wilder opponents, all of whom will start the fight saying to themselves, “It won’t be me. I’m different from the rest.”

But to even reach that stage, to even be in the position in which Fury found himself, a fighter will likely have to take Wilder right hands, be dropped by Wilder right hands, and then somehow, like Fury, almost rise from the dead to capitalise on Wilder’s shock at his inability to finish you off. In other words, beating Deontay Wilder, 43-2-1 (42), is no easy feat. It’s more an ordeal, in fact. It will invariably see a fighter have to endure pain the like of which they have never previously felt and also drag themselves back from the brink of defeat.

If Tyson Fury, the only man to have beaten Wilder, showed that (also, that it can be done), all Robert Helenius showed on Saturday night, as if we needed a reminder, was that one touch is still all it takes for Deontay Wilder to finish boxing matches and, in turn, ensure future ones will, for him, now be that bit tougher to make.