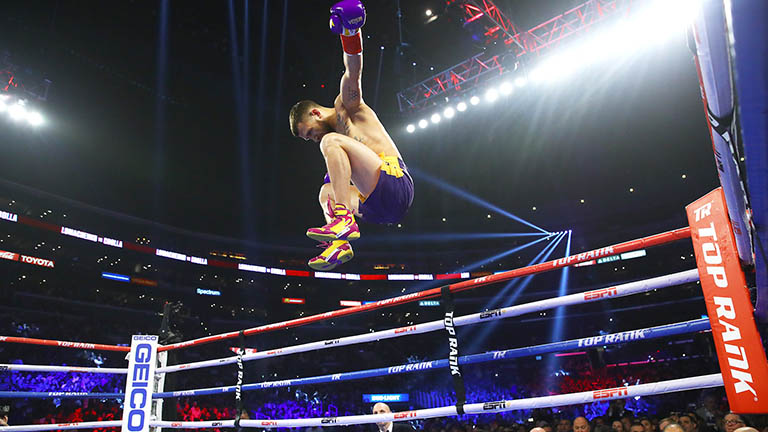 THERE was a logic to Anthony Crolla getting the fight with Vasyl Lomachenko, even if the Ukrainian’s promoter Bob Arum had never been particularly interested in the Mancunian as an opponent. Crolla had not only won an eliminator for the WBA lightweight title, one of the world belts Lomachenko holds along with the WBO, he was also a former world champion himself. Going into their fight on Friday, at the Staples Center in Los Angeles, Crolla could still be considered in the upper half of the world top 10. He’s a good fighter, a successful one too. But against Lomachenko that is not enough.

It is all the more impressive how ruthlessly and swiftly Lomachenko dispatched Crolla. He was a class apart, several in fact. There doesn’t seem to be anyone capable of matching the Ukrainian in the world today.

WBC champion Mikey Garcia should be in the conversation. He is a superb talent, highly experienced and is still the best opponent out there for Lomachenko. But earlier this year Garcia leapt up to welterweight, to be hammered himself by Errol Spence. That 12 round drubbing will do him few favours and making lightweight again will surely be punishing. That unification would be highly appealing but it’s Lomachenko who clearly is the man in form.

If that fight can’t be made, then Lomachenko will look beyond that to the IBF titlist Richard Commey, who would have fought Lomachenko this month if a hand injury hadn’t held him back. The Ghanaian is tall and strong, he should give the Ukrainian more of a fight than Crolla. But it’s a confident prediction that Lomachenko would win.

There are other lightweights coming up, Teofimo Lopez is a confident prospect who’s exciting to watch, Luke Campbelll, an Olympic gold medallist and former title challenger, believes he has the skill to compete at world level. But if Lomachenko boxes like he did on Friday night, it’s hard to see anyone in the world today beating him.