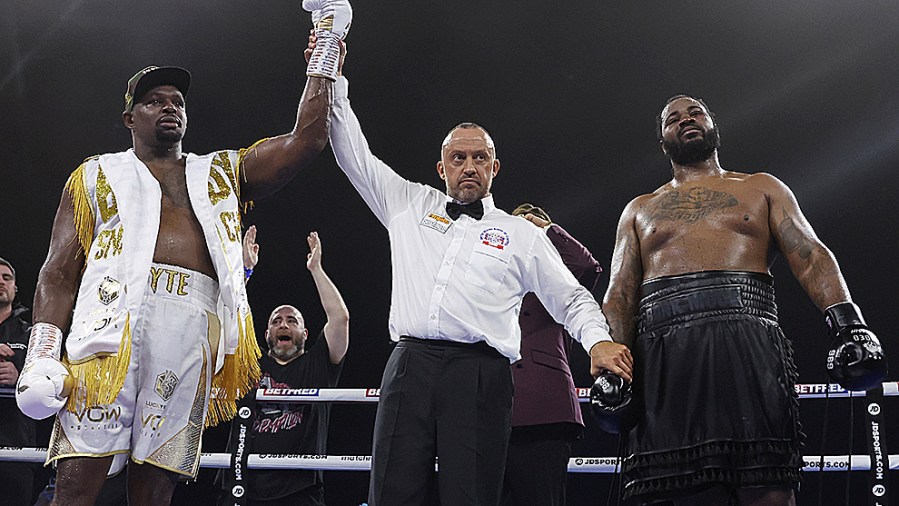 Dillian Whyte returns to winning ways at Wembley, but it's his opponent, Jermaine Franklin, who emerges from their heavyweight encounter with his reputation enhanced, writes Elliot Worsell

OWING to the fact he has for so long been sold to us as a bona fide pay-per-view star, be it as either an A-side or B-side, it is very hard not to judge heavyweight Dillian Whyte by the same gauge we would use to judge other so-called leading heavyweights.

That’s probably no fault of his – though, admittedly, he has done a fine job of selling himself as a “superstar” – but, regardless, it leaves Whyte in a difficult position, particularly when labouring to wins against the likes of Jermaine Franklin, whom he beat via a somewhat contentious majority decision (115-115 and 116-112, 116-112) tonight (November 26) in Wembley.

For if Whyte was truly the superstar he and others have tried to convince us he is, he would have surely looked better beating Franklin, an unproven but unbeaten American, than he did. He would have made a statement. He would have been dominant. He would, aware that there are still bigger fights up ahead, done all in his power to distance himself from the likes of Franklin – a 13-1 underdog – and solidify his claim that he belongs in the same league as the likes of Tyson Fury, Oleksandr Usyk, Deontay Wilder, and Anthony Joshua.

As it happened, the manner in which Whyte went about beating Franklin tonight merely highlighted the disparity between him and the aforementioned. Moreover, despite the occasionally entertaining nature of the bout, Whyte vs. Franklin ended up being the sort of fight one would have expected to watch on ESPN2 in the early 2000s, a reminder, once again, that just because the fighters today tell you they are superstars does not necessarily mean the quality is any better than what we saw in an era when social media was not available as a tool for self-promotion.

In other words, just because Dillian Whyte and the like tell you his fights are fights for which you should pay a premium price does not mean you are going to always get value for money. He will entertain, of course, as he did tonight, if matched against fighters of similar ilk (and Franklin certainly was). But, ultimately, the reasons for his coming up short whenever stepping up to that next level become apparent not just in those specific moments but also, if you block out the noise and concentrate on what it is you are watching, in fights like tonight’s: a battle of fringe contenders and nothing more. 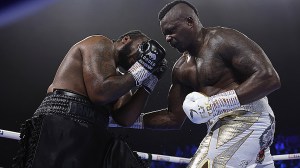 Indeed, even early on, when one would expect Whyte to try to assert himself on Franklin, we were instead delivered competitive two-way action, with it becoming increasingly hard to tell which of the two heavyweights was the former world title challenger and which was the unproven contender. Whyte would stalk Franklin from centre ring, therefore imposing himself geographically if not physically, yet every time he opened up on the smaller man he would find Franklin more than willing to fire back, seemingly unbothered by the Londoner’s punch power.

Franklin, in fact, was a picture of composure for much of the fight. Smaller but faster, he used the ring to good effect, often moving in and out of range, and, when confident enough to exchange, would shoot quick clusters of punches the way of Whyte, often ending these combinations with a slashing hook to the body. This, if nothing else, gave Whyte something to think about on his way in and ensured he was unable to just march forward and bully Franklin, now 21-1 (14). He was stung by Franklin on occasion, too, most notably in the ninth round, and would have been reminded, no question, of recent knockout defeats against Tyson Fury and Alexander Povetkin.

It is perhaps for that reason Whyte should not be judged too harshly on this performance. Coming as it did just seven months after being stopped by Fury, Whyte, 29-3 (19), will have surely experienced some sort of hangover from that night – the buildup, the knockout – and will have seen this Franklin fight, despite the importance attached to it, as anticlimactic by comparison. He will also be aware now of his own fragility and will know, having been dramatically knocked out in each of his three pro losses, that he cannot simply wade into opponents and expect to remain vertical on exit.

Caught between styles, perhaps – that is, caught between doing what comes naturally to him and doing what he needs to do to protect himself – Whyte is very much a heavyweight in transition right now and one has to wonder, based on tonight’s performance, if he will ever be able to strike a balance between successfully utilising his strengths, of which there are many, and successfully protecting his weaknesses, all of which are now known to the rest of division. 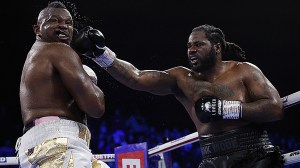