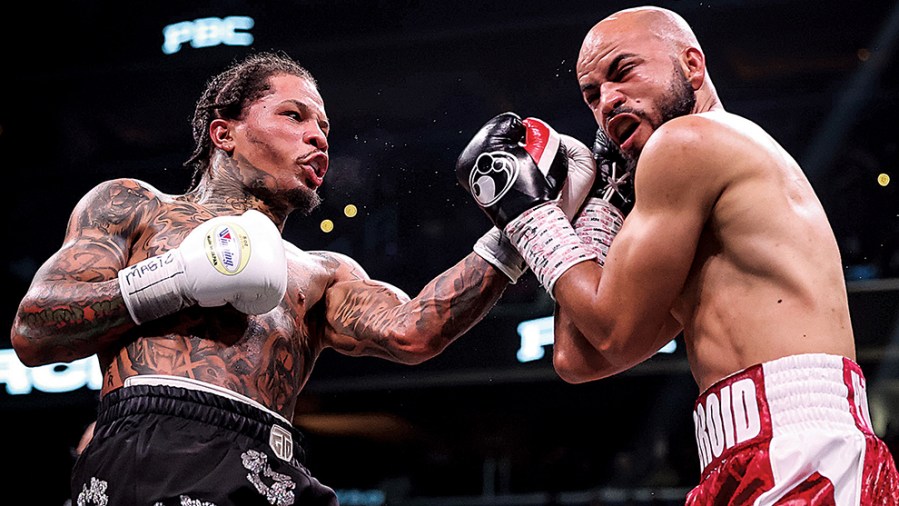 A ROWDY sellout crowd of 19,731 at Capital One Arena witnessed a 12-bout mixed bag, featuring a bevy of mismatches, a couple of upsets, a winning but disappointing performance by a rising star and a stellar outing by the boxer the crowd came to see, Gervonta “Tank” Davis.

As is his wont Davis got off to a slow start, scrutinising previously undefeated Hector “El Androide” Garcia, studying the gist of his style, looking for weaknesses.

Garcia seemed comfortable enough, and why not? He was undefeated and had held the WBA super-featherweight belt before moving to lightweight and challenging Davis for his secondary title. It was a gamble but paid better that staying at 130 pounds. Both were still a tad hesitant and next to nothing happened in the first round of the scheduled 12-rounder. It was more of the same in the second until Davis connected with a hard left to the head just before the bell.

Garcia, a 31-year-old citizen of the Dominican Republic, landed four clean lefts to the head in the third and fought well enough in the fourth to make it close. They were both still hesitant to commit and very few punched were thrown the fifth round, but those that landed came mostly from Davis.

Sensing the time was right Garcia launched a body attack in the sixth that appeared to bother Davis, who upped the tempo in seventh to edge a close round. Although trailing on the official scorecards, Garcia was still in the fight when “Tank” began to cut loose with his sledgehammer blows designed to steal men’s souls. Garcia gamely traded until late in the round when a left hook slammed into his right temple, scrambling his equilibrium.

Garcia’s legs buckled until he was in a squatting position, but he somehow managed keep his buttocks of the floor and his feet under him. He returned to his corner when the bell rang and sat on his stool, a dazed look on his face.

Garcia indicated he had enough, and although he didn’t answer the bell for the next round, the official ending was bizarrely ruled a TKO 13 seconds into the ninth.

“I didn’t know where I was when he hit me with that shot,” said Garcia. “My vision is back but my head still hurts. I couldn’t see from my right eye. It was going well up until that point. I was picking my shots.”

Unbeaten Philadelphia welterweight Jaron “Boots” Ennis’ first pay-per-view appearance did not turn out to be the dazzling display to which fans are accustomed. He entered the ring to an ovation almost as loud the one Davis received, but there was little to cheer about during his monotonous 12-rounder unanimous decision over Karen Chuckhadzhian.

The speedy Ukrainian spent every round moving laterally to his left and right, keeping his distance while circling away from Ennis, first one way and then another. Chuckhadzhian never came close to winning but his evasive maneuvering certainly made for an ugly affair. Ennis perused him round after round, but had difficulty cutting the ring off effectively and seldom succeeded in pinning him on the ropes.

The closest Ennis came to finishing his adversary was in the 10-round when a volley of body punches visibly hurt Chuckhadzhian. However, the moment passed and it was off to the races again. There were intermittent boos as the fight progressed. Then in the final round they actually traded punches with Chuckhadzhian getting the better of it.

All three judges scored the bout 120-108 in favour of Ennis, but his opponent definitely won the 12th. Mr Malik Wallace refereed the contest.

“He ran a lot,” said Ennis. “Hats off to him since a lot of guys didn’t want to fight me. So shout out to him for coming here and taking this fight.”

In the best fight of the night Roiman Villa upset previously undefeated Rashidi Ellis, Lynn, Massachusetts, by majority 12-round decision in an IBF welterweight eliminator. Villa stalked his opponent from the start, but Ellis’ educated footwork and unerring left jab kept him at bay for first six rounds. Eventually, Villa’s constant pressure wore down Ellis and the Venezuelan began to tag him with heavy shots. The American resorted to grabbing and holding to no avail. He was on the receiving end of the Villa’s power punches the second half of the bout.

Between the 11th and 12th rounds Villa’s corner urged him to finish the job, and that’s exactly what he did. As the fight drew to a close, Villa put Ellis on his back with a left hook to the head. Rashidi managed to beat referee Brent Bovell’s count but was in a bad way. He was soon floored again with a right-left combination that almost sent him through the ropes before he crumbled to the canvas. Rashidi bravely rose again seconds before the final bell.

The three-point differential in the last round resulted in scores of 114-112 (Dave Braslow) and 114-112 (Paul Wallace) for Villa, while judge Tammye Jenkins had it even at 113-113. Malik Wallace was the referee.

Former super-lightweight and welterweight title-holder Lamont Peterson, 38 (and inactive since March 2019) made an ill-advised comeback against 40-year-old Michael Ogundo. The U. S. based Kenyan knocked down Peterson in the fourth round with a wicked right hand. Although Lamont beat the count Ogundo’s punches kept connecting and the fight stopped at the 2-05 mark.