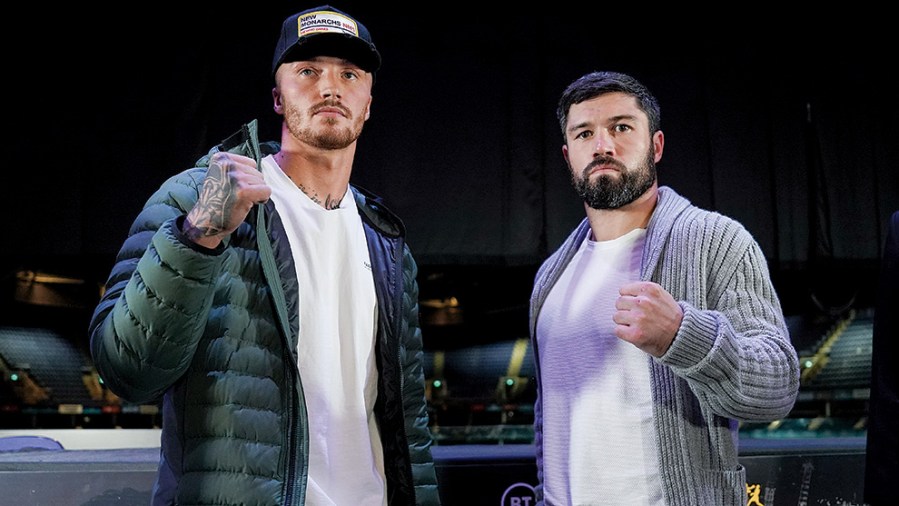 Parker and Ryder collide in sumptuous domestic clash that will make the winner a key player on the world scene, writes Declan Taylor

ZACH PARKER and John Ryder clash at the O2 on Saturday night in an excellent super-middleweight fight between two men who have grown accustomed to waiting around.

But it is only happening because Demetrius Andrade decided against fighting the former in what was his second withdrawal from that proposed clash in a matter of months.

Parker and Andrade were supposed to fight at Derby County’s Pride Park in May but a shoulder injury forced the Rhode Islander out of that date. Then, when a purse bid for the rearranged showdown fetched a relatively measly $305,000, Andrade decided to walk away from the idea completely. Considering the purse for the initial fight had been $1.83m, it was hardly surprising.

That move, however, opened the door for Ryder to step in at reasonably short notice as he bids to end a frustrating year on a high. The 34-year-old “Gorilla” started 2022 well, edging a split decision over Danny Jacobs at the Alexandra Palace in February but he has been on the sidelines ever since.

He had hoped that win would push him closer towards a shot at a sanctioning body belt but he has been left out in the cold until now. It is almost exactly three years since he lost controversially on points to Callum Smith in Liverpool and he has boxed only three times since. A win over Parker will supercharge his career and could even land him an unlikely shot at Saul “Canelo” Alvarez next year.

The stakes, therefore, are incredibly high in south London but Parker, too, has required ample patience as his on-off encounter with Andrade flirted for the past 12 months before it eventually ghosted him altogether. The unbeaten Derbyshire man last boxed one year ago, when he stopped Marcus Morrison inside four. It was his fifth stoppage win in a row meaning he has not gone the distance since he got the nod against Darryll Williams in their vacant British title clash in 2018. Many onlookers, however, believe he should have lost that night. Williams was inconsolable and never boxed again.

But Parker has done everything right since, although his series of quick wins means he has not had much time under the lights at all. In fact, in the past 32 months, he has taken part in just seven rounds of boxing. Ryder, therefore, is the man with the momentum.

He too knows that a defeat will just about end any remaining hopes he has of mixing it with the division’s elite. He said: “This is the most important fight of my career. At the stage I’m at now it feels like the winner stays on. I think it’s all about getting a win, not overlooking Zach but getting the win and going on from there. I’m old and I’m starving.”

Another interesting caveat is that Parker-Ryder is a very unusual example of a Queensberry boxer and a Matchroom boxer meeting in a main event without the need for a purse bid. Ryder, actually, is one of the few who have done it before, as he boxed Billy Joe Saunders on a Frank Warren show way back in September 2013. A purse bid was required to arrange that British and Commonwealth middleweight title fight, however, and Ryder eventually lost on points.

It was the first of his five career defeats to date but Ryder remains a tough out for anyone at 12 stone. On crossing the divide, he added: “It’s nice to be the peacemaker, the fixer and the bridge maker. I’ve done it before and it’s nice to do it again.”

The truth is, this was an opportunity too good to turn down for anyone in the Ryder business. This fight, live on BT Sport, is for the WBO interim title which means either a lucrative crack at Canelo or technically an immediate ‘upgrade’ to full belt-holder should the Mexican decide to pursue a different avenue next year. However, the need for another ‘interim’ championship when Alvarez defended the full-fat version of the WBO strap just two months ago is debatable.

Parker too knows how crucial a victory here is and believes Ryder is simply too small for him. The problem with that argument is so did Callum Smith. “I think he underestimated John but I won’t be doing that,” Parker countered. “I’ll be switched on and ready for whatever John brings to the table.”

The undefeated 28-year-old, who is equally adept from both stances, looks like a special talent – this might be his chance to prove it. Victory over Ryder will be a statement of intent from a man who believes he is already the best in the division.

“We’ve been waiting for a big fight for a long time so now it’s up to me to take it with both hands,” he added. “I believe I’m the best in the super-middleweight division so I back myself.”

Bookmakers make Ryder a 2/1 outsider but this is a very difficult fight to call. Ryder is tried, tested, experienced and coming off probably the best win of his career. Parker, meanwhile, is totally unproven at the top level and we do not know how he will respond when a strong, physical opponent sticks it on him. Even so, Parker to get the decision in a fight Ryder thinks he has won is the prediction.

There is also a trio of Commonwealth title fights in a card packed with intriguing trade fights. Most notably Hamzah Sheeraz, fresh from headlining at the Copper Box in the summer, faces River Wilson-Bent for the vacant strap. Wilson-Bent impressed in a losing effort to Tyler Denny back in June but Sheeraz looks destined for big things and could finish this one inside the distance.

Promoter Frank Warren said: “This is the sort of examination Hamzah needs and I feel certain it will be a competitive and entertaining fight. Having the Commonwealth title on the line is a big bonus and the winner will be firmly in line for a shot at the British title.”

There is also a good step up for undefeated Dennis McCann, who faces 17-3 Joe Ham. Questions had been asked of McCann after a couple of seemingly lacklustre performances but he answered them in style by stopping James Beech Jnr in July. This is another opportunity for him to outline his obvious potential and he is expected to do that – although he will probably have to go the distance in his first 12-rounder.

One man who has never had to do that is exciting lightweight Sam Noakes who is 9-0 (0) and also has the chance to win the vacant Commonwealth title. He faces undefeated Ayr resident Calvin McCord, who seems unlikely to hear the final bell. McCord is 12-0 but with only two stoppages he may not have enough pop to keep a noted puncher like Noakes off him for 12 long rounds. It does not look as though the Commonwealth title will be the ceiling for this former roofer.

There is also a quartet of Queensberry’s undefeated starlets in action on the bill, all of whom are 23 or under. Another banger, Pierce O’Leary of Dublin, takes on 16-3-1 Emmanuel Mungandjela over 10.

THE VERDICT: Kudos to Queensberry and BT for staging a quality bill.