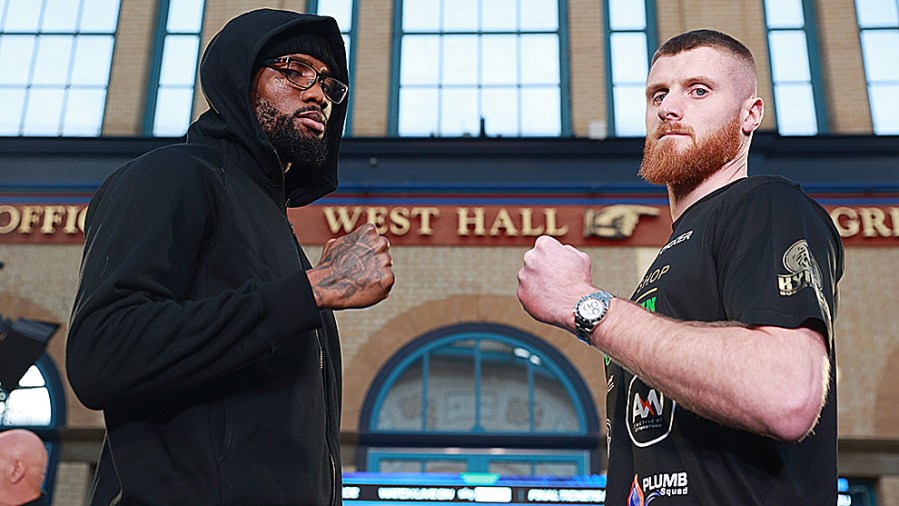 The Ally Pally show hit by Jumah’s retirement but some decent fights make this worth watching, writes Matt Christie

IT’S DIFFICULT to not feel desperately sorry for Deion Jumah, the gifted cruiserweight whose career was last week ended by the kind of bad luck that will now likely define it. Retinal damage forced the Londoner to pull out of his alluring battle with 27-year-old Mikael Lawal and, with this being his second serious eye injury in recent years, Jumah announced his retirement at the age of 33.

What we’re left with at the November 27 card at Alexandra Palace is not nearly as appealing but, with only 10 days’ notice, Boxxer pulled in a decent late substitute in the shape of East Kilbride puncher, David Jamieson. The vacant British title will still be on the line inside Alexandra Palace.

Lawal and Jumah had history. It was a contest that had been a long time in the making, stemming back to old sparring sessions from a decade or so ago. So it’s handy, if you’re a broadcaster like Sky Sports, that Lawal and Jamieson have history, too.

In an actual fight, no less.

Back in 2019, in an Ultimate Boxxer semi-final, Lawal outhustled Jamieson over three competitive rounds. It remains the Scot’s only professional loss. That backstory was likely the kicker for getting the rematch over the line.

Lawal is also the only real ‘name’ on Jamieson’s 9-1 (6) ledger. That’s if you don’t include Jake Darnell, the heavyweight who achieved infamy after being plucked from obscurity to be mauled by fellow debutant Frazer Clarke in February. Darnell, now 1-11, lasted 38 seconds longer with Jamieson but was still halted inside one round last month.

In February, David outpointed Samo Jangirov over 10 rounds and, at the same Boxxer tournament he and Lawal got acquainted, Jamieson won a tight three-rounder over Dan Cooper. Twelve rounds for the national championship is an altogether different proposition.

Lawal’s record isn’t exactly gushing with evidence that he can go on to rule the world, however. A dangerous puncher he might be, albeit one with bad habits born of his come-forward style, Lawal, 16-0 (10), is certainly beatable. Throw in the fact that Lawal had spent a huge proportion of his camp training for southpaw Jumah and it’s easy to understand why some believe Jamieson has a chance here.

Yet the Nigeria-born, Shepherd’s Bush resident has fast and powerful hands, he’s mobile and appears to have a decent chin. When in full flow he’s impressive, and his background, one that features homelessness and flirtations with crime, is certain to push him forward now he’s approaching big opportunities as part of the burgeoning Boxxer stable.

Lawal is yet to go past six rounds so his stamina remains a question mark but we fancy him to slowly pummel the resistance out of Jamieson to get the win in the second half.

Harder to call is the super-middleweight clash between world-ranked leftie Lerrone Richards, 16-0 (3), and Fulham’s talented Zak Chelli, 12-1-1 (6). English champion Chelli is in fine form after wrecking the unbeaten ledgers of Jack Kilgannon (rsf 6) and Germaine Brown (pts 10) in April and June respectively. Richards, meanwhile, has been out of action since scoring a career-best win over Carlos Gongora last December.

Don’t rule out the upset completely. Richards, though he has the makings of something special, has a tendency to coast and almost switch off at times. Chelli is technically sound and will come with belief aplenty for this 10-rounder. However, we expect Richards to rise to the challenge in this well-matched contest for which Boxxer should be applauded – it would, frankly, have been tempting to match both of them in separate, easier, bouts. We go for Richards to win this one on the cards.

Slough’s Adam Azim could end up as the bill-topper, such is the good feeling around the exciting and gifted 20-year-old. There’s no question that Boxxer, and Sky Sports, are banking on this young 6-0 (5) super-lightweight to achieve big things in the sport. On all evidence we’ve seen so far, that faith is understandable.

Azim tackles the always willing Rylan Charlton, 9-3-1 (4), of Norwich. The heavily-muscled Charlton, though a feisty tryer with a decent dig, looks made for Azim. He decked Florian Marku in February 2021 before being halted in eight and acquitted himself well in an April Boxxer tournament only to fade against Dylan Cheema in the final. Expect Charlton, as per, to give this everything he’s got before he’s taken out in the middle rounds.

Walthamstow’s “Magic Man”, Sam Gilley, defends his English super-welterweight title against Ruislip’s Sean Robinson, 11-1-1. This is a big step-up for Robinson who has only banked four rounds in three years and this is his first fight since December. Gilley, 14-1 (7), looked good while stopping Drew Brown in April to win the belt and we expect a similar result in his first defence.

THE VERDICT: A solid ‘trade’ card that should appeal to the hardcore.