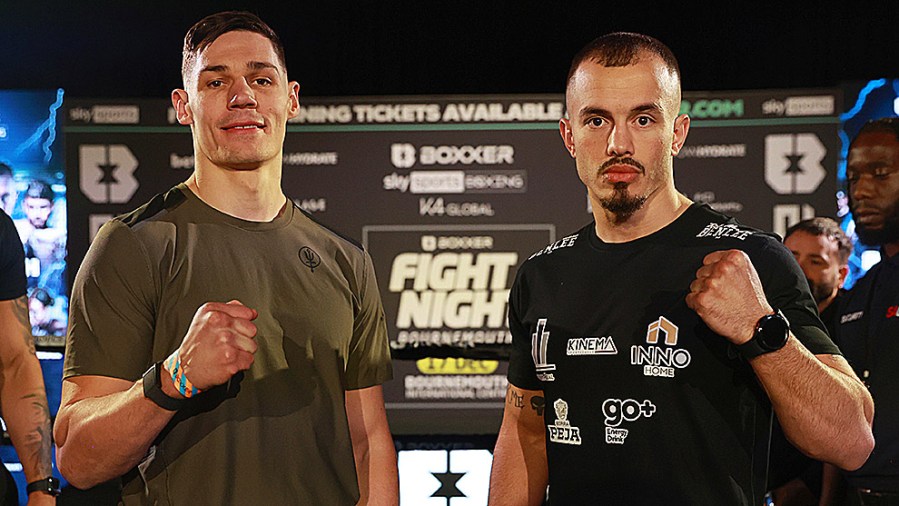 WHILE this might not be the year Chris Billam-Smith wins “British Fighter of the Year”, one category for which he is certainly in contention is “Most Improved Fighter”, owing to the three wins he has so far registered in 2022 and the manner in which those wins were secured.

Once a cruiserweight easy to miss, the 32-year-old Billam-Smith has this year become a can’t-miss attraction, forcing an entire division pay close attention to his progress. Better than that, he has, given the nature of his recent form, also started to attract quite the following, particularly at home in Bournemouth where his next fight takes place on Saturday (November 17).

The last time Billam-Smith was there it was July and considerably warmer than it is now. That night, against Isaac Chamberlain, Billam-Smith had to dig deep following an uncertain start to eventually take over and overwhelm his opponent, beating him in the end fairly comfortably on points. He did, in the process, show both weaknesses and strengths, though far more of the latter than the former, it has to be said. Moreover, in beating Chamberlain the way he did, thrilling his fans throughout, Billam-Smith made a case for being one of the fittest and most relentless fighters in the country; someone who seems to possess the ability to get stronger with each passing round.

In many ways that performance versus Chamberlain was a career-best showing for Billam-Smith, 16-1 (11). His biggest win prior to that one also arrived this year when, in April, he beat Ireland’s Tommy McCarthy for a second time, this time stopping him inside eight rounds. That, again, was a sign of both Billam-Smith’s rapid rate of improvement and also his ability to adapt his style and approach depending on the opponent and flow of a particular fight.

In truth, Billam-Smith has been getting better and better for three years now, which makes his sole pro loss against Richard Riakporhe (a split decision in 2019) not just one hard to recall but one he will surely be keen to avenge at some stage. Before that, though, he must deal with the threat of German-based Kosovan Armend Xhoxhaj this weekend and do so with the professionalism and consistency for which he is now known.

On the face of it, Xhoxhaj appears a banana skin of an opponent – if, of course, allowed to become that. He is, on paper, a 28-year-old with a modest record of 14-2 (7) whose best win to date is his last one, a 10-round decision win over Roman Fress, then 15-0, in May. Other than that, he has beaten primarily a host of journeyman to build his record, with the two other key results on his ledger both defeats: the first, a third-round KO loss against Dzemal Bosnjak in 2019, and the second, a fourth-round TKO against Mateusz Masternak, a former Tony Bellew opponent, in 2021.

Those results don’t exactly scream durability, nor bode well when going up against a man like Billam-Smith, who, while perhaps not a one-punch KO artist, is someone whose physical strength and grit is often enough to break the heart and will of an opponent. Should this tendency continue this weekend, one can easily see “The Gentleman” ending the year with another stoppage win – what would be his 12th as a pro – somewhere around the eighth round.

Of the two, Azeez, the current British champion now vying for the vacant Commonwealth strap, is certainly the man with form and momentum. Two years younger than Fielding at 33, he has fewer miles on the clock, clearly, and has also been on a good run in 2022, beating first Reece Cartwright inside eight rounds in March and then, in September, Shakan Pitters via 12-round decision. He has, since turning pro in 2017, developed a knack for taking testing challenges – often against fellow prospects or contenders – and emerging from those tests with both his unbeaten record intact and his reputation enhanced.

In Fielding, he faces his most experienced opponent to date, of that there’s no doubt. The 35-year-old from Liverpool has after all shared the ring with a number of quality operators over the years, including the likes of Saul “Canelo” Alvarez, Callum Smith, John Ryder and Tyron Zeuge, whom he famously stopped inside five rounds in Germany in 2018. He won his British super-middleweight title, meanwhile, against Ryder, whom he outpointed via split decision in 2017, a win that looks better and better with the passing of time.

Speaking of which, Fielding no longer has time on his side and therefore this fight against Azeez could well be his last roll of the dice. Indeed, since losing against Alvarez in 2018, he has boxed just three times, stopping Abdallah Paziwapazi in two rounds in 2019, Emmanuel Danso in two rounds in 2021, and Timo Laine inside three earlier this year. Those wins helped Fielding get back in the swing of things, no question, but it is hard to see how they prepare him for a British and Commonwealth title fight at light-heavyweight. Nor is it likely they will be enough to prepare him for an on-song Dan Azeez, who, providing he maintains his good recent form, can be expected to win this one by decision.