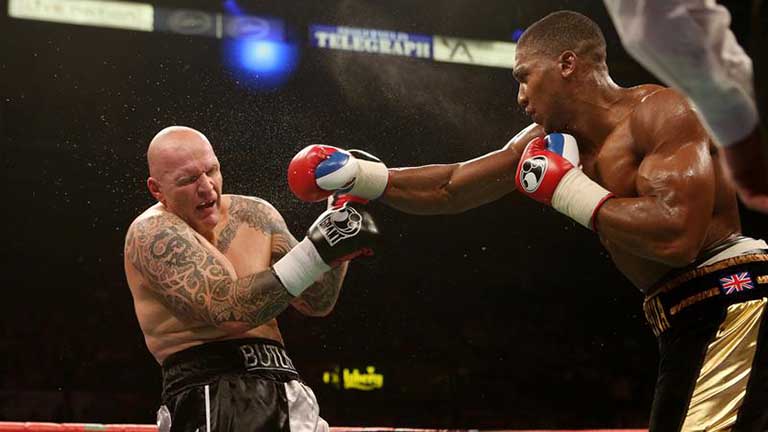 IT’S been a tough career when the question you’re most often asked is: “Who hit you the hardest?”

Paul Butlin had a tough career.

“I’ve been hit by some big punches,” said the 40-year-old from Melton Mowbray in Leicestershire, “and nobody hits harder than Anthony Joshua.

“If he hits you on the chin, the fight’s over.

“Lucas Browne can bang as well, but he isn’t in the same class. Joshua has skills as well.”

Butlin’s ring reminisces also include fights with five other heavyweights who’ve challenged for world honours and another current titlist.

Butlin stepped in to spar Tyson Fury when everyone else’s ‘phone was switched off and was thanked – loudly – on Sky Sports following Fury’s victory over John McDermott in their English-title fight in June, 2010.

“Paul Butlin is the only man out there,” boomed the new champion’s father, ‘Gypsy’ John Fury, after the fight. “THE ONLY MAN OUT THERE!”

Butlin, who also sparred “hundreds” of tough rounds with Matt Skelton, smiles at the memory. In the company of the toughest of men, his toughness is admired.

That respect wasn’t always mutual. As anyone who has followed him on Facebook and Twitter knows, Butlin was always up for a social media spat. He asked “Sharon Briggs” for “a straightener,” told Jason Gavern where to go and whenever Dereck Chisora is mentioned, the pick-a-window snarl of the nightclub bouncer he once was spreads across Butlin’s face.

Following their second fight – at the York Hall in May, 2009 – Chisora was fined £2,500 and banned for four months for biting him.

“I asked for a written apology from him and I didn’t get one,” said Butlin, a pro since way back in 2002.

So tough were many of Butlin’s matches, it was considered a triumph if he finished the fight on his feet. Often, the expectation was that he would be knocked out.

“I just asked what the money is,” said the father-of-four, “and as long as they didn’t take the mickey, I say: ‘Yes.’

“I always saw those fights as an opportunity and a challenge.

“If I won, it was massive and who else was going to go in there with them and have a go? I wasn’t scared of any of them.

“I never cared who I fought. I was always in the gym and always healthy. I don’t drink or smoke.

“I know they used me as a stepping stone, but I always came to fight. I was paid to have a go. I didn’t lie down. I got put down, but I got back up.

“How many heavyweights would have got up from the right hand Joshua hit me with? He pulled my jab out of the way and hit me with a right hand over the top. It was a horrible punch, the best I’ve taken, but I still got up.

“I got more credit and more money for finishing on my feet against Joshua than I did for winning a four-rounder on a small-hall show and not getting the decision. What was the point of that?”

Despite making the choice to fight on the right-hand side of the bill, Butlin insists he was never a journeyman.

Possibly the best of those 16 wins came in the inaugural ‘Prizefighter’ at the York Hall in April, 2008. Though Colin Kenna didn’t let his boxing career stop him going to the pub for a Guinness or two after a day’s work on the building site, he was still ranked around the top 10 in Britain going into the quarter finals. Butlin biffed him inside a couple of rounds before being out boxed by David Dolan.

“I knocked out a top-10 heavyweight,” remembered Butlin, “and nobody seemed to care.

“I was hoping for an English-title shot or an eliminator, but my career went backwards instead.”

Butlin did get a shot at the Midlands Area title, lost narrowly to Lee Swaby and not fancying “selling loads of tickets on small-hall shows to make a few hundred quid,” he went on the road. “I’ve got four kids and a mortgage,” he explained. “Why shouldn’t I be well paid?”

Butlin was paid well for fights with Paolo Vidoz and Larry Olubamiwo he took at around 24 hours’ notice and as with all who fight out of the away corner, he has his share of hard-luck stories. Convinced he should have ended with “another 10 wins” on his 16-24-1 record, Butlin isn’t bitter and accepts that for most fans, he won’t be remembered for who he beat, rather for who he had the guts to go in with. Butlin, who was fond of laughing at opponents after they had punched him very hard in the face, seems happy enough with his memories.

“I’ve met some great people in boxing,” he said, “and travelled and seen places I probably never would have seen.”
Stories to tell his grandchildren include the time he completed the eight rounds with Edmund Gerber despite suffering a broken hand, the victory over Shane McPhilbin that secured the Midlands Area title and a fight with Johnathon Banks on the undercard of Wladimir Klitschko-Ruslan Chagaev, watched by a crowd of 61,000 in Germany.

The Banks fight was one of Butlin’s hardest. “He was fast and could bang,” he remembered of the seven-round loss. “I couldn’t see the punches coming.”

Butlin fought in Germany again. The summer of 2015, he took a round or two off Franz Rill on the scorecards and in 2016 he was stopped in three rounds by unbeaten banger Christian Lewandowski.

“I was always treated really well when I go abroad,” said Butlin, a national karate champion in his teens before he took up boxing at Melton Amateur Boxing Club at 24.

“They put me up in nice hotels and the promoters seemed to like me.

“When my opponents wanted to shake hands at the weigh in, I stuck my head in their face. It helped sell the fight – and let everyone know I was there to fight, I was there to have a row. The promoters used to say to me: ‘You English are crazy’.”

Butlin, amusing company in a grumpy, Victor Meldrew, the world-is-against-me way, but quick to defend himself when he feels slighted, turned professional 14 years ago with ambitions of winning “Midlands, English and British titles” and the backing of an ambitious promoter.

Coventry-based Capitol Promotions UK billed Butlin as ‘The Blonde Destroyer’ – he had hair in those days – got him a few wins, but he lost a 50-50 fight to Paul Buttery, Capitol ran out of capital and he ended up drifting around the gyms, including a spell with the Ingles in Sheffield.

Butlin ended his career training himself at his own Hardknocks gym in Melton and managed by Carl Greaves.
He’s fond of Greaves, twice a challenger for the British super-featherweight title in his own ring career, and under him, Butlin had some rather more winnable fights, including his Midlands Area title win that Greaves promoted in Lincoln a couple of years ago.

But following a controversial loss to DL Jones in a four rounder, Butlin went back to fighting for money for the rest of his career.

He agreed to face fun heavyweight Sean ‘Big Sexy’ Turner in Dublin, but the show was scrapped after a fatal shooting at the weigh in.

“When I worked on the door, I was bottled and had knives pulled on me,” said Butlin, “but I’ve never been through anything like that.

“I’d just weighed in when we heard a bang and the whole crowd shifted. Carl just shot out of a side door straight away and I followed him. We headed down an alleyway and heard another bang. People were falling over each other. Everyone was panicking and Carl was saying: ‘Someone’s been shot.’ We saw some lads carrying someone out of the hotel and trying to stop a car. I wanted to go and help, but Carl told me to leave it.”

Butlin plans to train fighters for Greaves after deciding to quit fighting following a heavy knockout loss to Kash Ali in the dying seconds of their four rounder at the York Hall. Butlin thought he was heading for a points win – until he ran onto a right hand that laid him out face first on the floor. The fight was waved off with only three seconds remaining.

“That’s never happened to me before,” said Butlin. “I usually finish fights on my feet. “I used to be able to take short-notice fights because I was in the gym all the time, but now I’ve got work, my gym and my family. It was too much. I want to get out while I’ve still got my marbles.”

Not only that, Butlin’s nose is straight and the only mark boxing has left on him is a bit of scar tissue around his eyes. He still loves the sport – “I watch loads of fights, get Boxing News every week” – and reckons he could have a good future as a trainer.

The charity boxers Butlin trains at his gym win more than they lose and he said: “I’m good in the corner and I can wrap hands. I know what I want from a fighter and if they don’t do what I say, they are out of the gym. “I’ve got lots of experience to pass on.

“I did it the hard way, but when people look at my record they will say: ‘He didn’t duck anyone’.”