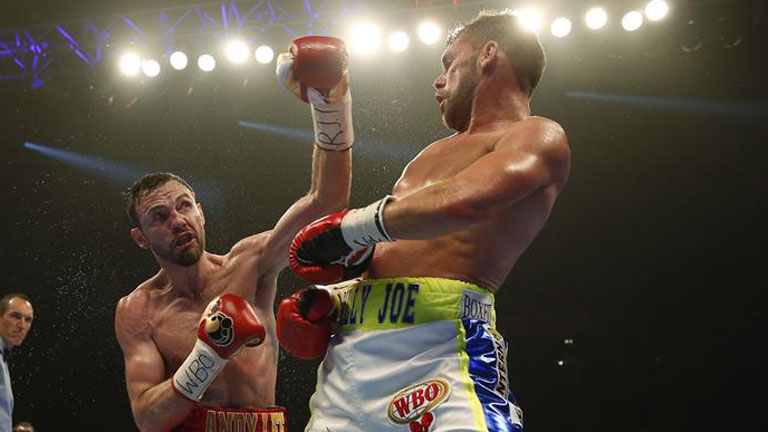 How Billy Joe Saunders sealed his place in boxing history, by Tim Martin

WHEN the first ever all-traveller world title fight between WBO middleweight world champion Andy Lee and challenger Billy Joe Saunders was signed in June last year, it was unthinkable that the pair wouldn’t meet for another six months. In that time two postponements put the fight in jeopardy. Along the way, Ireland’s most successful female boxer lost out on a famous night in Limerick, a stadium director was left dumbfounded by the decision to pull the plug on an event he described as “the biggest fight in Irish boxing history,” and the champion was struck down with a virus. In the final reckoning a new and undefeated world champion was crowned.

Having succeeded in becoming a world champion last December, teeing up that victory with an unforgettable right hook against Matt Korobov, Lee readied himself for a dream homecoming and first title defence in Limerick’s Thomond Park. The 34,000 capacity venue steeped with an almost mythical significance couldn’t have been more fitting. The home of Munster rugby is so case-hardened to sporting war, that its official slogan reads ‘stand up and fight.’ For the fighters, this contest would represent travellers’ pride rather than fame. They would be backed and celebrated by a host of supporters from their community, expecting entertainment.

With the undercard being pieced together, one name caught the imagination: that of Katie Taylor. The possibility of the amateur European, World and Olympic lightweight appearing on the bill emerged. Unfortunately, her management and Lee’s were unable to reach an agreement and negotiations were prematurely ended. That was the end of the matter from the perspective of negotiating parties, too.

But the fight for September 19 was moved to Manchester for October 10. The reason for its cancellation was that Lee had a virus. Then with Saunders suffering a cut to the eye during sparring thereafter, the fight was postponed once again, moving to six days before Christmas in the Manchester Arena. Amid the setbacks however Lee never lost sight of the fight’s significance. By way of comparing it to other Anglo-Irish fights, he spoke intensely about what lay in wait, admitting, “I come from a generation of middleweights that didn’t fight one another [referring to himself, Matthew Macklin, Martin Murray and Darren Barker] and that was a shame, but Billy and I are rivals in our community, in our division and in world boxing.”

The champion was nonetheless forced to distance himself from rumours that he was overlooking Saunders while reportedly discussing a future unification fight with Gennady Golovkin. By Lee’s own estimate, he will greet retirement in two to three years. Without time on his side, he has made no secret of wanting to chase the most financially rewarding fights on offer.

If Lee’s apparent disrespect for Saunders provided the challenger with extra resolve, the Englishman also drew strength from his friend Tyson Fury shocking Wladimir Klitschko to be crowned world heavyweight champion in November. Before the victory, Saunders had gone so far as to back the outsider with a handsome bet of £5,000. Thereafter, he strongly defended Fury as the self-proclaimed ‘Gypsy King’ who put his community at the centre of sporting debate with spectacular speed. Controversial views on homosexuality, women and more saw the 27-year-old widely criticised. Throughout the storm, Saunders maintained that prejudice toward Fury explained the criticism. He also suggested that Fury should give up his British passport and switch nationality to Irish.

For some who aren’t travellers, the word reminds them of outsiders from society and caravan sites, often worse. In his own judgment, Saunders said, “It’s a shame that when people think about travellers they tend to think about robbing and thieving. That’s not the case. People need to step back and see that this fight is even bigger than our travellers’ stories. He [Lee] is representing Ireland and I am representing England. Look at it differently. People should be saying ‘These boys have come from tough backgrounds.’ This idea that we should all be tarred with the same brush needs to stop. People should see what we are doing for our community and appreciate that we are two genuine men.”

All along, Saunders wanted the world to know about his traveller heritage and how he would write his community into the history books. He foresaw his undefeated record being extended and a new traveller name sitting proudly at the top of the world. Twice knocking Lee down with intelligent right hooks, he produced a world-class performance and was correctly awarded a majority points decision to win the title.

In the process, the pair of southpaw travellers fell short of delivering a war for the bloodthirsty among us, but after a six month sideshow outside of the ring, these fighting men lasted the distance in a priceless contest for their community. Such a feat mattered more to them than anything else. In Saunders, his community has a leading man fit to put on a classy show wherever he goes. Lee left Manchester damaged by defeat but his reputation remains intact. Let him travel once again, on the road to become king. Let Saunders be acknowledged – by all – for his sporting success and making history, at long last. He’s earned it.