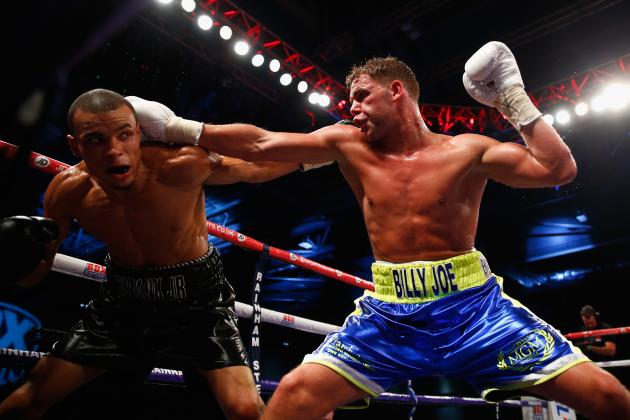 BILLY JOE SAUNDERS, the WBO middleweight mandatory title challenger, has stepped aside to allow champion Andy Lee to make a voluntary title defence against Peter Quillin expected to be in New York, and may make his glittering American debut on the undercard.

Saunders, the current British, Commonwealth, European and WBO International Champion, and his manager and promoter Frank Warren have allowed Lee to fight the American star next, subject to approval from the WBO, and Saunders will fight the winner – that both hope will be Irish rival Lee – in a huge summer showdown.

Warren believes that a Lee-Saunders world title clash is a massive attraction and deserves to be staged at a premier location like a football stadium, but with the unpredictability of the weather at this time of the year, coupled with the availability of grounds, it is more beneficial to wait until the summer.

However the unbeaten Hatfield ace – who marked his arrival amongst the elites of the middleweight division with his victory over arch-rival Chris Eubank Jnr in November – agrees with Warren.   Whilst Saunders previously stepped aside to allow Lee to fight Russian Matt Korobov for the WBO title in December, so he could take on Eubank Jnr, Saunders says his time will come and is excited to get the chance to fight in the Big Apple.

“As any boxer would if they had the opportunity to fight for the world title they would want it immediately, that’s the business we’re in, I want to prove that I’m the best in the world and I believe that I can beat Lee or Quillin right now,” said Saunders

“Frank’s right in that the fight between me and Lee, if he defends his title against Quillin, will be a massive fight and needs to be held on the biggest stage and that’s a football stadium, the fight will only get bigger and bigger, so the timing needs to be right and it needs to wait until the summer.

“Whilst I’ve got to be patient for my world title shot, the chance to fight in New York in my first pro fight in the US is a dream I’ve had since I started boxing and it’s massive buzz for me to show my skill in front of the American fight fans.”

Saunders adds that fighting for the prestigious WBO 160lb crown, that has been held by legends of the sport, Nigel Benn, Chris Eubank, Steve Collins, Oscar De La Hoya and Bernard Hopkins, will be an honour.

“To fight for the WBO middleweight belt that has been held by British greats like Benn, Eubank, Collins and also Chris Pyatt, plus legends like De La Hoya and Hopkins is what I’m in this sport for, history and glory.”

Warren added, “This is a significant moment in the British middleweight division. With Eubank Jnr challenging Interim WBA world champion Dmitry Chudinov on Saturday 28th February at the O2 arena, and providing Saunders wins the WBO world title, then it will pave the way for a huge unification rematch between the bitter rivals, bringing back memories of the big, classic, fights in the division’s golden era between Benn, Eubank and Michael Watson.”

Eubank Jnr attempts to make an enemy out of Chudinov