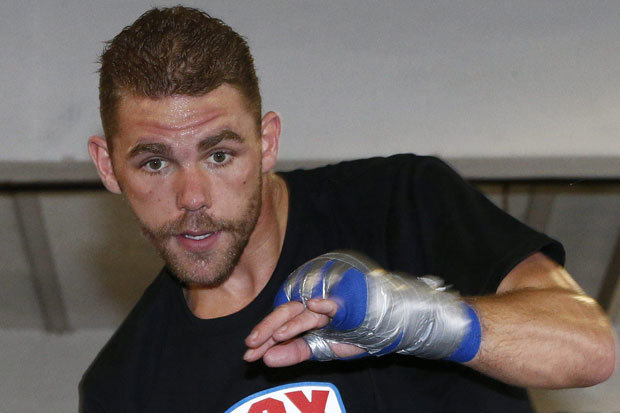 But first Saunders must get past Blandamura for the European title

UNBEATEN middleweight Billy Joe Saunders continues to edge ever closer to his dream of becoming the first of travelling stock to win a boxing world title.

A 2008 Beijing Olympian at the age of just 18, the brilliant Hatfield southpaw has already cruised to Southern Area, Commonwealth, British and Intercontinental honours as a pro.

And collecting the European title against unbeaten Italian Emanuele Blandamura at Manchester’s Phones 4u Arena this Saturday (26th July), on the undercard of Tyson Fury v Alexander Ustinov, could provide the ideal dry run to a world title challenge, for the man already ranked number one in the WBO rankings.

The 24-year-old was in a talkative mood when boxing writer Glynn Evans rang him on Saturday evening to discuss recent developments.

Ten months on, how do you reflect upon your Lonsdale Belt winning 12 round point’s decision over Islington’s John Ryder? Did you learn anything new from that fight?

I’d had a long 12 week camp for the fight with Spike O’Sullivan – no mug- just a few months before. I performed very well against a fella listed number four with the WBO at the time but only had five days off before resuming at the gym.

Jimmy (Tibbs, his veteran coach) did a very good job getting me rests but I think we all knew I was a little over the peak. I was 100% fit but not fresh. And I don’t need to make excuses because I won the fight clearly enough.

I certainly don’t want to take anything from John Ryder. He’s a real good talent; strong inside and a better boxer than people give him credit for. He’s got good distance and isn’t as easy to hit as he appears.

I was probably only 65-70% of what I’m capable of and my right hand started swelling bad from about round three but I learned from that fight how to get through when everything isn’t going my way. I learned I can still compete and win at a good level when I’m not at my best. I take confidence from that.

Five of your last six title fights – including the last four – have lasted to the cards. Do you punch hard enough to flourish at the very highest level?

If I’m honest, I’ve had 19 professional fights and not once have I made the weight correctly. Not once, did I not use sweat gear at the gym or for my roadwork. That saps a lot of the goodness out of you. You can get away with stuff early on against the journeymen types but definitely not at the level I’m entering.

But for this European title fight, I’ve got a dietician on board and I’m doing it all to the letter. I’m pushing cruiserweights about in sparring. I don’t classify myself a banger, I’m a box-fighter but you’ll be seeing a far stronger, more powerful Billy Joe Saunders on July 26th.

Bizarrely, the one opponent that you did stop –Australia’s Jarrod Fletcher – has since surpassed you and is challenging for the WBA title in his next fight. Surely that must ire?

You know what? It doesn’t. Jimmy Tibbs always drums into me that I’m only 24 and, even though I’m (WBO) number one contender, it doesn’t matter if I have to wait until I’m 26 to challenge for a world title.

I’m hearing Matt Korobov has been named mandatory ahead of me for (WBO champ) Peter Quillin and I honestly don’t care. I’m in this to WIN a world title and hold on to it, not just to challenge for one. I’m a very strong believer of what will be, will be.

I’m quite happy to allow Frank Warren to do his job, to his time scale. For him to land me a European title shot on home ground after nine months out injured is fantastic. I’m very grateful. As long as I keep working, keep getting paid, I’m happy.  I’m past a prospect now, I’m a serious contender but I’m still not the finished article.

If I win in Manchester, and then have to have a defence or two, no problem at all. I genuinely believe I’m the best middleweight in Britain now, ahead of Martin Murray and Matt Macklin who are both very good fighters.

If all goes to plan, might one of those defences be against a certain Christopher Eubank Jnr, who features on the Manchester undercard?

People are right when they say I don’t need him. He brings absolutely nothing to the party. He needs me. There’s no Nick Blackwells or John Ryders on his record; no titles to be gained.

But I’m big on pleasing the fans, the man who works nine to five and pays £50 for his ticket to watch me fight. I’ll fight who they want me to fight. And I’ve got 30,000 people on Twitter saying they’ll pay to watch me give the boy a hiding.

He’s very arrogant. He irritates everybody. It would be a great pleasure to be the one to give him a hiding. I’d be absolutely distraught if I didn’t waste him inside six rounds. If Frank tells me the match is made, I’ll be over the moon!

After such a great win over Ryder, it must be frustrating to have been stuck on the sidelines for 10 months.

A bit but I definitely needed a rest after four hard 12 rounders, back to back. In the past, I’ve had problems with my left wrist. It swells almost every fight. But, against Ryder, I damaged the tendons on my right hand.

Then just before Christmas, when I returned to training for a fight in February, I slipped and fell whilst running and properly finished off the tendons that were already damaged. It knocked me back but everything happens for a reason. I just rested up and got the best medical attention possible.

In what specific areas have you improved in the gym since the Ryder fight? Having won the Southern Area, Commonwealth, British and InterContinental belts, what gives you confidence that you’re now ready for top international class?

I know I can do 30 rounds no problem and I’ve already got all the skill and ability. The main thing has been working with the dietician to get my weight right and improve my punching power. If you put shit fuel in a car it don’t run right. Same with food and the body.

I get confidence just from looking at the reigning champions. I’m not ready for (Gennady) Golovkin yet, I admit that, but I’d not be shy of going in with any of the others. Jarrod Fletcher is going for the WBA title yet I blew him out in two rounds. Like Murray and Macklin at domestic level, they’re all getting old while I’m maturing and growing. Look what I’m already capable of now and then consider what I’ll be like in another 12 months.

(IBF boss) Sam Soliman should never be a world champion at 40 years old. Quillin is strong and punches harder than me but technically, I’ve forgotten more than he’ll ever learn. He’s not in my class. When I have to turn it on, I beat him ten times out of ten.

(WBC king Miguel)Cotto didn’t shock me beating Sergio Martinez, Martinez’s performance shocked me.  He looked an old man. I’d have loved to have been in the ring with him that night. Cotto’s style is perfect for mine. He’s constantly in your face and he ain’t the best of boxers.

The Phones 4u promotion is sure to be a huge event, enriched by both Romany and Irish travellers supporting yourself and Tyson Fury. Is there rivalry between Tyson and yourself – and your respective followers –  as to who becomes the first traveller to challenge for, and hopefully win, a world title?

Not at all. Tyson’s an Irish traveller, I’m Romany but we’ve been very, very good mates since we travelled the world on England squads together in the amateurs. Some fans perceive him as brash and arrogant but that’s just to sell fights. Those who know him well will all tell you he’s a true gentleman with a heart of gold. And all his family are the same.

We’re already making history as it is. I think (light-heavy) Johnny Frankham was the only gypsy to win a British title before us but he didn’t hold on to it for too long. He didn’t get near world level. If Tyson wins a world title before me, I’d shake his hand and sincerely congratulate him. I’ve no doubt he’d be similar if I win one before him.

Given it’s the most significant fight of your career, would you rather be headlining yourself or are you content to be chief support on such a blockbuster event?

Oh I’m very happy to be on this show because I know how many people will be there. It’s just about the biggest arena around at the moment.  It’ll be rammed with gypsy boys to support Tyson and me plus all the other boxing fans. It’ll be a great night of boxing with stacks of media interest. It’ll be a huge platform for me.

How has camp gone?

Perfectly. I’ve rented the Newlands gym in Woodford, Essex from Lee and Riley Wilson. Me and Jimmy Tibbs have it all to ourselves. The TKO in Canning Town is still my gym but its one big family and people are constantly talking to ya, breaking your focus, when you’re training.

Being away in Woodford, is like being away in camp. I get my work done without distractions, rest, sleep, repeat. I feel a lot better for it. I’ve been sparring (former ABA heavyweight champion) Simon Barclay and on Monday (7th), I’ll start sparring with Nick Blackwell and Spike O’Sullivan.

What do you know of Blandamura? What qualities and weaknesses have you identified and how do you counter and exploit them?

I know it’s hard to pronounce his name! He’s not a big puncher but he’s got a very good workrate and he ain’t a bad boxer from what I’ve seen. But it’s a case of who’s he been in with?

His defence seems very poor. He throws, then drops his hands, then moves away. His hands don’t come back and I’ll be able to splatter him in between. He advances from all angles and shapes. He lacks the grounded class that’s embedded into me from boxing at all those top international amateur tournaments.

He’ll discover that I’ve a great work rate too. I’ll look to apply pressure, make him hit thin air, then push him back and take him to places he ain’t been before. If I perform as I’ve been performing in the gym, I don’t think he’ll last ten rounds with me.

Winning the European will be a big achievement for me and I’ll be really thankful. Then I’ll be floating on the top of the water.

If I win impressively, I’ll be knocking on all the world champions’ doors, just waiting for someone to answer.
Tickets and are available through Eventim on 0844 249 1000 or eventim.co.uk