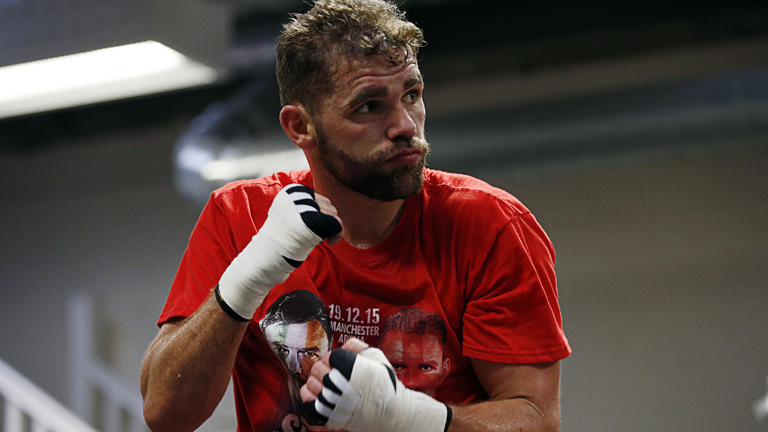 In Clarke's Shoes: Andy Clarke on the fighting culture that has produced Billy Joe Saunders and Tyson Fury

Travelling men have had a long and rich association with prize fighting.

But last week was one to remember and one which I think we may in time look back on as the dawning of a new era, an era in which traveller fighters announced themselves as boxing’s equivalent of football’s Boys from Brazil.

On Wednesday at York Hall Martin J Ward claimed the European super-featherweight title with a stunning stoppage of Julio Giner and then three days later in Canada WBO middleweight champion Billy Joe Saunders treated a global boxing audience to a flawless exhibition of the sweet science.

Ward’s win came three years to the day after Andy Lee stopped Matt Korobov to claim the WBO 160lbs crown. Just under a year later Tyson Fury became the linear heavyweight king, and just a few weeks after that Lee’s WBO title stayed in the traveller community when Saunders won it from him. We shouldn’t forget Hughie Fury either, who challenged for the WBO heavyweight strap, one of cousin Tyson’s old belts, just three months ago.

Numerous studies have been undertaken with a view to discovering why Brazilians can do what they can do with a football, why Jamaicans are so fast and why Kenyans have such incredible stamina. Physique and physiology have been analysed to the nth degree with calf size even being proffered as an explanation in one instance (apparently it was determined by one study that it was impossible to be a good distance runner if your calves were above a certain size).

But in all cases the explanation is a simple one and the same one. It doesn’t lie in any perfect storm of genetics or the random possession of innate talent. It’s much simpler than that. It’s not natural, but ‘nurtural’. Brazil produces genius footballers not because there’s something in the Copa Cabana water but because football is a religion and everyone starts to play it as soon as they can walk. And they play it all day, every day, at the expense of almost everything else. The whole country is a greenhouse that cultivates footballing talent in a way that no other country does. Other countries could do it, there’s nothing stopping them, but they don’t. For Brazil just swap Jamaica or Kenya and for football swap sprinting or distance running.

The travelling community is potentially a Brazil/Jamaica/Kenya of British professional boxing. Its men are expected to be able to defend themselves with their hands, it’s part of their culture, and they learn to do so from a very early age. Just as a Brazilian boy will have a ball at his feet as soon as he’s managed to find his feet, a traveller boy will be shown how to tape his hands as soon as he can raise them.

The Furys, Lee, Saunders and Ward have all been boxing from the moment they were physically capable of doing so and you can tell. To a man they look totally at home in the ring, it’s an environment they’re completely comfortable in. They don’t betray a shred of fear, apprehension, panic or even tension when they’re in there, instead they’re calm, composed, focused and ready. It’s just another day doing what they’ve always done, what they’ve been taught to do all their lives. The way they talk about boxing is even different to the majority of their competitors. I’ve commentated on a number of Martin J Ward’s fights now and I’ve long since given up asking him for his thoughts on his opponent because he never has any. That’s not due to any kind of arrogant oversight on his part but purely down to the fact that in his mind the right way to approach a bout is to prepare yourself as best you can and only concern yourself with the man in the opposite corner when you have to, which is when the bell goes. Before that point you don’t know what he’s going to bring, he could do something totally different to anything he’s done before and so render all analysis and homework irrelevant. So it’s best just to wait and see what he does and then adapt, see what problems he poses and then find the solutions. If that sounds like a very simple approach then that’s because it is one but it’s the kind of approach very few athletes are able to employ because it requires you to be totally at one with your craft, and you can only achieve that zen-like state if you’ve been at it a really long time, if you started studying and practising it as young as humanly possible.

Now this doesn’t mean that traveller fighters are invincible, of course not (Brazil don’t always win and Jamaican and Kenyan athletes don’t always place first). The same potential pitfalls lurk for everyone, regardless of your background, and it’s perfectly possible for anyone to start young (I had a long conversation recently with Ryan Burnett, who started boxing at the age of four, about this exact subject, about how boxing was so ingrained in him that he finds himself able to do what he needs to do in the ring using his unconscious mind, as he puts it), but for travellers the optimum conditions needed to achieve success in the ring are in place from day one, the environment is ideal.

All of this does beg an obvious question though. Which is; why, if my argument is valid, have professional world champions only recently started to emerge from the travelling community? It’s a good question and one I can only attempt to answer with an educated guess. It would appear that sanctioned, official, professional boxing has only become an aspirational career for the community’s young men in this century, that prior to that it was seen as something that could supplement income but not something it would be acceptable to take up full time. Why? Well my guess would be that it was seen as being too “establishment”, and also that, in terms of the community’s traditions and values, committing to the inevitably selfish life of a professional athlete was not seen as a socially responsible option. I could be wrong about this, and I will happily be corrected by someone who knows better.

But whatever the reason, there has been a sea change and the results have been dramatic. Lee, Saunders, Ward and the Furys were all highly decorated amateurs before turning pro and between them now have multiple World, European, British and Commonwealth titles. The last three years have, if you like, been the end of the beginning.

Success breeds success. Youngsters cut from the same cloth will look at these men and will want to achieve what they have achieved and for the reasons stated above they’ll be in the ideal environment to do just that. A sleeping giant has woken and the rest of the boxing world had better look out; it could be like watching Brazil.