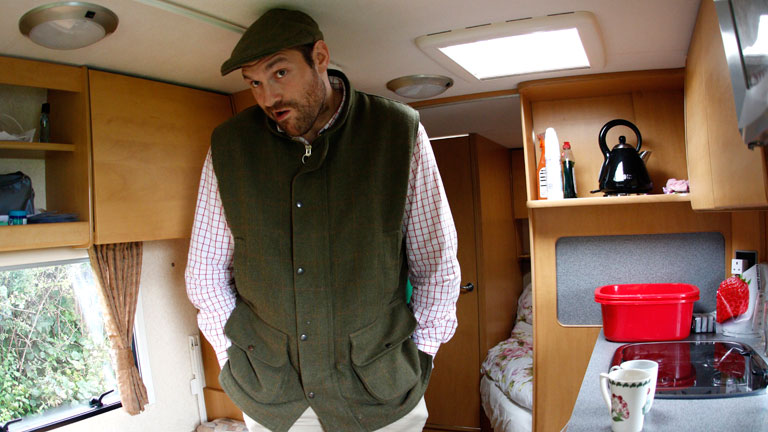 A PILGRIMAGE encompassing three train journeys and a near-two-mile trek from a branch line outpost to a remote, rural estate in the North West allows plenty of time for quiet contemplation. As my long walk begins, the heavens open ominously, a leafy avenue offering only intermittent rain cover. However, with the world title challenger’s base only 15 minutes away, the heavy shower begins to abate, revealing a breathtaking blue sky – an apt metaphor perhaps for today’s subject illuminating a previously gloomy heavyweight scene. The maps application on my mobile phone suggests I take a narrow public footpath cutting through lush, deserted farmland but the overgrown passage can barely accommodate my substantial frame and uncoordinated gait. I trudge on, until the dense bushes and trees render the track impassable and a horse, watching studiously from the adjacent field, inclines its head and snorts derisively at this latest example of human hubris. Suitably chastened, I turn back, although I fancy Tyson Fury would not have been so easily cowed (or ‘horsed’).

As I march along the alternative route towards a wide road with no discernible pavement I spy a tractor ambling forward in the distance and, more alarmingly, a solitary car lurking, silently, on the grass verge. I cannot in good conscience retreat for a second time, so I am relieved to identify Craig Brough, Action Images photographer and my saviour, as its driver. Together we arrive outside a wide, metal gate that guards what looks like an enormous barn and its surroundings from nosy outsiders like us. It already feels a lot like Deliverance, even more so when the screen slowly rolls back to reveal precisely no one.

We head left, to the front of the barn – later I find out it has been converted into a huge family home for the site’s owner – where the proprietor’s father-in-law is negotiating an industrial digger across the plain. We turn around and are confronted by a most bizarre juxtaposition. Rubbing shoulders with the unique mansion are three caravans, of various sizes and hues, though all appear small and basic. Exiting the one directly ahead, trainer Peter Fury, bearded and faintly maniacal, jogs towards us. “The world champ’s just in there,” he enthuses, indicating to our right. The designated trailer door is open and, as we approach, I shout, “What’s Klitschko doing here?” before I notice John Fury, Tyson’s father, sitting on the sofa inside and immediately regret my impertinence.

Released just six months ago from a five-year prison stretch – for gouging a man’s eye out in a brawl – 6ft 3in John emanates raw strength and animal aggression despite the friendly greeting he bestows upon us. Tyson, fixing a drink in a kitchenette far too small for his frame, is, at an official 6ft 9ins, significantly the bigger man, but comparatively serene. He and John share this caravan – Peter’s son, unbeaten heavyweight Hughie, apparently inhabits the third, although we never see him – and it is one an estate agent would term ‘cosy’. The vehicle struggles desperately to contain their combined bulk and I am acutely aware that the addition of Craig and myself may be considered pushing our luck, especially once Tyson sets himself down next to his father. After five weeks in France and a fortnight’s hiatus enforced by Tyson’s chest infection, the Furys have pitched up here, in the middle of nowhere, to prepare for the biggest fight of his life, a world heavyweight title shot against Wladimir Klitschko on November 28. As the rain starts up again, drumming into the caravan’s exterior, saturating its windows and making the intimate environment all the more cloying, Tyson’s gaze takes on a faraway aspect.

“Why would anybody want to train in the p***ing down rain and live in a trailer when you could be in France in 40-degree heat?” Fury asks bitterly, and without pausing for an answer. Sartorially, he is every inch the country gent; the ensemble of tweed gillet, checked shirt, casual slacks and brown brogues accentuate his height but offer no additional clue regarding his profession. “I’ve no idea but we do mysterious things. We train about two miles from here, in an industrial unit. Here, it’s p***ing in the bushes, s***ting in the bushes, just typical Gypsy life really.

“It doesn’t make a difference to me where I live. I’m still just a man made of blood and bone. I’ll get the same night’s sleep in that bed as I would in a million-pound mansion. I get up eight o’clock, have breakfast, be at the gym for 10 until 12. Come back, have dinner, relax, if I do a run, say 40 minutes at 3pm, then come back. I go to the gym again at eight o’clock,
so spending quite big periods of time in the caravan. It’s a typical life, just without the kids and family. It’s just training and me and me dad talking bulls*** all day.”