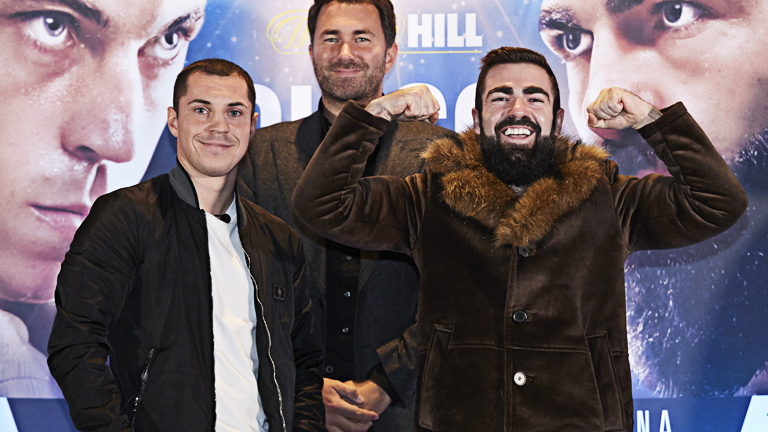 IT has been just over four years since Scott Quigg last had a world title wrapped around his waist. Since dropping his WBA super-bantamweight crown to Carl Frampton on a split verdict in their unification clash, the Bury boxer has only had five fights. He won the first three, all at featherweight, but then missed weight prior to his scheduled WBO 126lb title tilt against Oscar Valdez two years ago. Despite the belt no longer being up for grabs for Quigg, the bout still went ahead.

Quigg did not end up winning the contest against Valdez, but he did regain the respect of those who had chastised him for coming in overweight. Valdez triumphed unanimously on the scorecards, yet Quigg performed valiantly during a brutal, bloody affair. Valdez finished up with a broken jaw (as Quigg did against Frampton) and missing tooth, while Scott suffered a broken nose and a cut to his left eyebrow.

After weighing in closer to super-featherweight than featherweight for his war with Valdez, Quigg decided that an official move up to 130lbs was his best option. Last time out in October 2018, he stopped the outgunned Mario Briones in two rounds. He was due to appear on the undercard of the Andy Ruiz Jnr-Anthony Joshua rematch three months ago, but an injured arm ruled him out.

Quigg’s opponent in Saudi Arabia that night was set to be Irish southpaw Jono Carroll. Now that the injury has healed, the two are able to get it on at the second time of asking. The Manchester Arena will host their 12-rounder this Saturday (March 7), live on Sky Sports Action/Main Event (UK) and DAZN (US).

For Quigg, it really is a case of returning home. Not only will this be his first appearance at Manchester Arena – a familiar local stamping ground – since December 2016, but it will also mark a reunion with his ex-coach, Joe Gallagher, whom he left to link up with Hall of Fame trainer Freddie Roach in Los Angeles in early 2017.

“It’s great to be back fighting at Manchester Arena and for my supporters to be able to see me on UK soil,” said Quigg. “It’s a perfect platform for me to launch my career forward again and get back in the mix for a world title shot.

“This year is going to be a very successful one for me. I know that I’ve still got it. All the doubters will see that there’s still plenty left in the tank. I’m looking forward to getting in there and taking Carroll apart. He’s going to come and try to have a go but he’ll get demolished. I’ll take him out, get my arm raised and move on. It’s as simple as that.”

Frequent barbs have been exchanged between the fighters in the lead-up to their match, much in the same way that Carroll engaged in fighting talk with Tevin Farmer prior to challenging him for the IBF super-featherweight strap 12 months ago. Although the rugged Dubliner was unanimously outscored by the slick-boxing Farmer, his reputation was enhanced in defeat.

“My loss to Farmer woke me up,” Carroll reflected. “I want to gain as much experience as possible and I welcome failure. I like it when I fail because it means I’m pushing myself hard enough. Anything that will push me mentally and physically I’m up for. It keeps me focused, disciplined and gives me guidance. I want to be the best I can possibly be. I know that I’m at world level now. I’ve been working my arse off to go and smash Quigg up.”

Carroll’s setback against Farmer was sandwiched by a split draw with decent veteran Guillaume Frenois in December 2018 and a unanimous victory over the unheralded Eleazar Valenzuela in August last year. An exciting and bullish aggressor, Carroll maintains a high-energy approach and attacks the body with gusto, though he is not known as a heavy hitter.

Unlike Carroll, the experienced Quigg is regarded as a powerful puncher, as the likes of Rendall Munroe and Kiko Martinez can attest. Jolting uppercuts and overhand rights up top are particular favourites of his, as are hurtful hooks downstairs. A strong all-rounder who can box behind his jab or swarm forward, Quigg boasts a good work rate and is very fit. However, he has been down on a couple of occasions in the past. Nevertheless, with his superior pedigree and versatility, Quigg is the pick to prevail on points in a competitive tussle.

Also on this Matchroom Boxing show, Derbyshire’s Zach Parker, 18-0 (12), Manchester’s Hughie Fury, 23-3 (13), and Liverpool’s Anthony Fowler, 11-1 (8), are in action over 10. Former British super-middleweight boss Parker is favoured to get past Australia’s Rohan Murdock, 24-1 (17), via decision in their WBO title eliminator. Czech Pavel Sour, 11-2 (6), is likely to be beaten inside the distance by ex-WBO heavyweight title challenger Fury, while 2016 Olympian Fowler can outpoint Bolton’s Jack Flatley, 16-1-1 (4), at super-welter.

The Verdict Quigg needs a win to recapture some momentum.