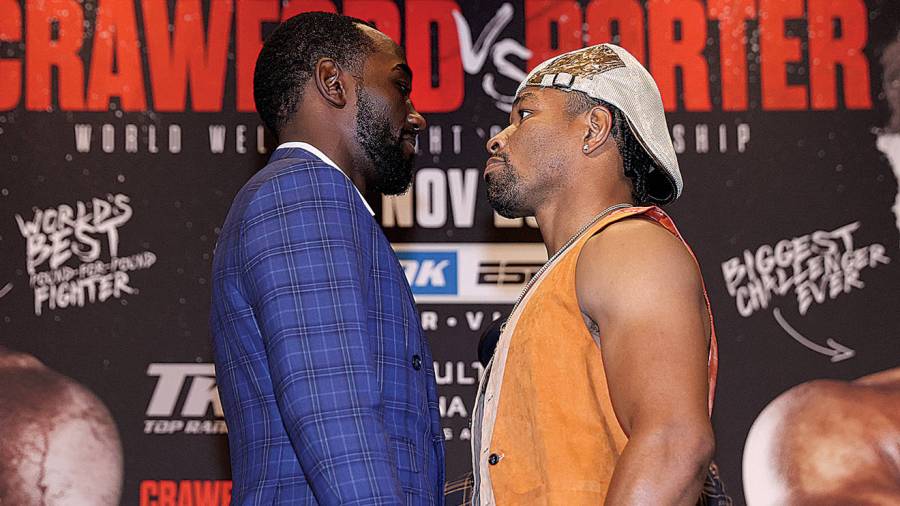 Terence Crawford vs Shawn Porter may not be the one welterweight fight we wanted. But it’s a very good matchup between two of the best fighters in the world, writes Matt Christie

FROM fights we really want but don’t get, lesser fights, yet still very appealing fights, are born. It has been happening at heavyweight for several years. Most recently, we dreamed of Fury-Joshua taking place, only to find comfort in the reality of Fury-Wilder III and Joshua-Usyk when the too-good-to-be-true fell through. And it’s happening at welterweight, too. For a long time we have yearned for the No.1 and No.2 in the division – Errol Spence Jnr and Terence Crawford respectively – to ignore the politics blocking their path to each other and just fight. Yet, today, we are thankful that at least Crawford and Shawn Porter, the third best welterweight in the world, can come together instead.

The Las Vegas battle, hosted by Mandalay Bay, will be dressed up as a super-fight beforehand. Already, plenty are calling it as such. But that’s really for you to decide. Or rather, it will be decided by the number of people who pay to watch in the US (whether on the door or at home), who get up in the early hours of Sunday morning in the UK to watch live on Sky Sports, and ultimately by the sports editors who gather their daily news. For a fight to be a true super-fight, it has to capture not only the sport’s attention, but the world’s. Chances are this will not break any box office records nor make a splash in the mainstream media like true super-fights do. But that’s not to say that this isn’t a very good matchup or one that the likes of you and I are very much looking forward to, because it’s certainly that and we certainly are.

For Crawford, the WBO belt-holder with mind-bending skills almost as ludicrous as the truth that, at age 34, and with a spotless 37-0 (28) record, this contest with Porter is as close to a ‘defining’ fight as he’s ever had. One can rightly point to him expertly winning a gong at lightweight, then cleaning up at 140lbs, as testaments to his considerable ability. His victories over Ricky Burns, Yuriorkis Gamboa, Viktor Postol, Julius Indongo and José Benavidez Jnr in particular (the last four were unbeaten when facing Crawford) were all excellent results. To a lesser extent, beating an ageing Kell Brook and hacking the resistance out of Kavaliauskas were also impressive. But through no fault of his own, Crawford is lacking the kind of breakout triumph his talents deserve.

Without question, Crawford should be a household name by now. The truth is, however, when whomever is in your household asks why you’re getting up at 4am on a dark Sunday morning, answering with ‘Watching Terence Crawford’ will only be met blankly before they roll over and go back to sleep. Victory over Porter will not change that but it should – we can only hope – make everyone in the Crawford business realise that a contest with Spence Jnr is the only logical next step. Because neither Spence nor Crawford can reach the absolute pinnacle without beating the other first.

Porter, fearless in the extreme, will justifiably fancy his chances of doing an Oleksandr Usyk and rendering the last few paragraphs redundant. Of teaching the sport yet another lesson about making the right fights at the right time. In short, when a fight is a no-brainer, keep it that way. Don’t overcomplicate it. Just do it. Of course, that has not been boxing’s way, particularly since the advent of the pay-per-view age and, groan, ‘the four-belt era’. Porter, in a welcome contrast to the sport that pays his bills, keeps things simple. He goes about his business without over-thinking or trying to plan too far ahead. Instead, seeking the biggest challenges regardless of how damaging defeat might be, preferring instead to gamble only on himself.

Whereas Crawford’s resume is lacking big welterweight names, Porter has faced pretty much all of ‘em. Go back to December 2013 and Shawn has faced, in chronological order, Devon Alexander, Paul Malignaggi, Kell Brook, Adrien Broner, Keith Thurman, Andre Berto, Adrian Granados, Danny García, Yordenis Ugas, Errol Spence Jnr and Sebastian Formella. The losses to Brook, Thurman and Spence all came via close or split decisions. Though correctly the underdog here, he is very much a live one. Anyone, and that includes Crawford, who isn’t at the very top of their game likely gets turned over by the Las Vegas resident.

The bad news for Porter is that Crawford has shown zero sign of slipping. A spiteful switch-hitting southpaw who boxes wonderfully from range, and even better in close, is a formidable competitor. Watching him in full flow is a joy, and he’s right up there with fighters like Canelo and Usyk – and not so long ago, Vasiliy Lomachenko – who read the sport like a doctor of literature reads William Shakespeare. It’s effortless, it’s captivating, it’s so gosh darn intelligent. Crawford gets boxing like few others do. And Porter, for all his mauling and nightmarish aggression, might ultimately prove too ‘basic’ to win. Crawford’s scintillating diversity, one presumes, will be the difference. But don’t expect this to be anything other than a tough and gruelling night’s work for the Nebraskan.

There might be a train of thought that Crawford, due to that superior boxing ability, could turn this into an easier fight if he opts to simply box clever from distance and artfully counter his onrushing foe. But beneath the outward wizardry of Crawford is a nasty and calculating fighter, one that will be acutely aware of the problems Spence Jnr encountered before winning a split decision in 2019, and one that will want to prove he can fight fire with fire and go one better than Errol. If he actively pursues the stoppage, it might give Porter more chances to enforce his seemingly unbreakable spirit on proceedings and bludgeon his way to the upset. But that seems unlikely. Even Shawn, 31-3-1 (17), is not indestructible.

Expect Porter to have some success early but not enough to really build upon. Crawford can bedazzle at times and, if he doesn’t score a stoppage in the second half (not a bad bet), the likeliest scenario is him pulling away down the stretch as the contest becomes ever more one-sided. At the end of 12, Crawford should be 38-0 without a single argument from anyone that he deserved his points victory.

The Verdict Porter to again prove he’s hard as nails but Crawford the favourite here for good reason.