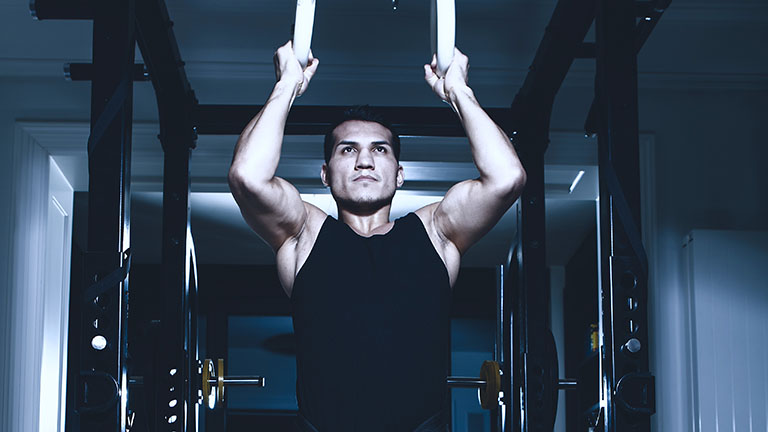 PULL UPS are often associated with physical education classes and military training. The goal is usually to be able to achieve a certain number, such as 10 reps, and maintain that for optimal performance. A fighter, however, needs to take a more serious approach to this exercise. First, let’s make the distinction between a pull up and a chin up. A pull up is performed with a pronated grip, such that the palms are facing away from the body. In contrast, a chin up is performed with a supinated grip, such that the palms are facing the body. There are many other variations of this exercise, but before getting into them let’s look at why these exercises are so valuable.

For improving punching power, one of the best exercises is the incline barbell press, which works the anterior deltoids, pectorals, and triceps. However, it’s equally important to train the opposing (antagonist) muscles to prevent developing a round-shouldered posture from emphasizing these muscles. In boxing, the sport does not adequately work these pulling muscles, so often it’s necessary to go into a training phase where I would emphasise chin ups with higher number of sets.

For beginners who struggle with this exercise, I don’t recommend hooking bands under the feet to assist with the movement. First, the bands provide the greatest pull when they are stretched, so they are in effect giving you’re the most resistance where you need it the least. They also reduce the amount of stability required to perform the exercise (which is why lat pulldowns have little carryover to chin ups – you need to pull your body around the bar, not pull the bar around the body).

If an athlete can perform a few reps with the exercise, let’s start with what I don’t like. First, cheating pull-ups. The shoulders are one of the most commonly-injured upper body part in fighters, which is why I am very selective in what upper body exercises I prescribe for my athletes. The so-called “kipping” chin-ups, which involve swinging the body and jerking out of the bottom position, place a high level of stress on the shoulders. It’s even worst for those who have round shoulders, which is a common posture with fighters, as this makes the shoulders more susceptible to injury, including dislocations.

For this reason, strength coaches for boxers must carefully weigh the risks of performing any exercise involving the shoulders. Performing cheat reps on pull-up and chin-ups, a practice called “kipping,” places an extremely high level of stress on the shoulders. Certainly, dynamic movements similar to these exercises occur in gymnastics, but gymnasts are athletes who are progressed in their skills in a specific manner with trained coaches. For boxers it’s better to perform chin-ups and pull-ups in the conventional manner, using strength, not momentum, to lift their body weight.

I would have them perform the exercise for low reps but a high number of sets. For example, they could perform up to 10 sets of 2 reps. Another way is to perform negatives, such that they would step up onto a bench so they can put their chin over the bar, then lower slowly. About 4-5 sets of 4-5 reps will do the trick.

I prescribe several variations of chin-ups, but the key is to make the exercise progressively more difficult by performing them with additional resistance or using different variations of these movements. My fighter Yuriorkis Gamboa could perform chin-ups with 41 kilos (90 lbs) attached to his waist. I should note that I attached additional resistance with a dip belt. Although some coaches prefer to use a climbing harness rather than a dip belt, these take much longer to put on and have to be removed for most exercises that I would combine them with for supersets or tri-sets.

As for variations of chin-ups, using thick-handled chin-up bars is one way to make any chin-up more difficult. One of my favourites, and most challenging variations of this exercise are one-arm chin-ups — Jack Culcay could do three reps in this manner. For MMA athletes, I recommend a variety of grips, including chin-ups performed holding ropes and also using Globe Gripz, which are round polymer grips that can be attached to chin-up bars.

Another variation of this exercise is the sternum chin-up, an exercise made popular by bodybuilding guru Vince Gironda. It can be used with a supinated, pronated, or semi-supinated (neutral) grip, and involves maintaining a layback position throughout the entire exercise. This exercise strongly works the scapulae retractors and as such is great for correcting and preventing round shoulders. One more advanced exercise I should mention is the subscapularis pull-up. The key aspect of this chin-up is that pull your body up to the level of your upper pecs, then push yourself away from the back as you slowly yourself to the start position.

To save time, I like to combine chin-up into supersets and tri-sets. A superset might look like this for an accumulation phase (high volume, low intensity) and intensification (low volume, high intensity) phase:

If a fighter is serious about performing at their best and enjoying a long career, chin-ups must be a part of their program.

Mortiz Klatten’s book about strength and conditioning for fighters, The Klatten Power Boxing System, is available now from Amazon.