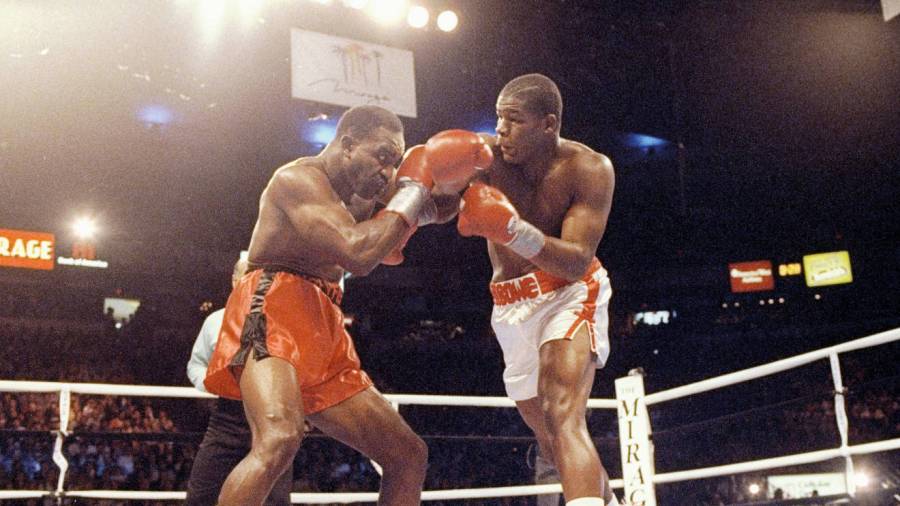 BN readers voted Frazier-Ali I as their favourite fight of the seventies and Hagler-Hearns from the eighties. What's their choice for best fights from the nineties?

THE premise for Desert Island Fights is simple: You will soon be stranded on a desert island. To ease the boredom, you can take along one – and only one – fight from each of the last five decades (1970s, 1980s, 1990s, 2000s and 2010s) to watch while you’re there. Which five fights do you take?

For many fans, the 1990s was the last true golden era. The decade began when Mike Tyson was still an invincible man and it ended with his powers exposed. That descent, which was bumpy in the extreme, saw fighters like Evander Holyfield, Riddick Bowe and Lennox Lewis pass Tyson on their way up.

It was an era that gave us the best of James Toney and Roy Jones Jnr, it cemented the greatness of Julio Cesar Chavez, Arturo Gatti laid the foundations to his thrill-seeker reputation while little savages Michael Carbajal and Humberto Gonzalez generated their own million-dollar rivalry.

In the UK, Nigel Benn and Chris Eubank seduced the entire nation by bashing lumps into each other while “Prince” Naseem Hamed – the most cocksure of them all – threatened to take over the world…

A HELLACIOUS affair that, when all our votes were counted, nudged Ike Ibeabuchi’s violent heavyweight victory over David Tua out of the top five. What else is there to say about this eternally watchable encounter that hasn’t already been said? It’s a contest that cemented both fighters in British boxing history while introducing the enigmatic Eubank, a natural showman with balls of steel, to the world. In turn, Benn learned his lessons from the defeat to rebound in style.

WATCH OUT FOR:
The hatred and ferocity on Benn’s face during the referee’s instructions. Barely able to contain himself, Benn visibly loads up as referee Richard Steele invites them to touch gloves. Eubank – who placed a £1,000 on himself to win in the opening round – then answers the first bell by turning to his side and gliding towards Benn back-first. It’s all fascinating, furious and borderline comedic.

DID YOU KNOW:
Two weeks after the fight, Nigel Benn’s debut (and only) single, Stand and Fight, was released. A taster: ‘I’m the warrior, that makes you sorrier, the destroyer, I will annoy ya, so goodnight my friend and amen, tell them you just met big bad Benn’. It peaked at number 61 in the UK charts; something of a travesty when one considers Ice Ice Baby by Vanilla Ice was number one at the time.

A MESMERISING clash that is a glowing advertisement for Naseem Hamed’s unique daredevil act. There was the unforgettable journey into the ring when the Sheffield superstar, dancing and gliding through confetti, was intent on making his presence felt in New York. Then came the action inside the ropes against an accomplished and talented Kevin Kelley. Hamed, at times, was brilliant. But predominantly he was careless, over-eager and the knockdown-fest was all the more entertaining for it.

WATCH OUT FOR:
The moment when all hell breaks loose. For the first two minutes of the opening round, Hamed is disciplined and effective as his jab – often underused – breaks down Kelley impressively. Then Hamed walks into a shot, hits the deck for the first of the bout’s six knockdowns and all control goes out of the window.

DID YOU KNOW:
The bout – in which Kelley led on two of the three cards at the time of the stoppage – exceeded all expectation. In the US alone, 2.5m viewers tuned into HBO (who had paid $1m for a marketing campaign to get Hamed’s name out there) to watch the action, which was unusual for a featherweight contest at that time.

A DIFFICULT fight to watch again and again but, nonetheless, this savage encounter figured highly in the voting. Everyone knows what happened to McClellan in the aftermath but his fate shouldn’t tarnish the superhuman effort put forth by Benn to actually win the bout. Seemingly knocked out in the opening round as McClellan bulldozed him out of the ring and dropped again in the eighth, Benn summoned all his courage and warrior instincts to win this one in the 10th. Legendary commentator Reg Gutteridge, like many observers, thought that McClellan had quit. He would always regret that.

WATCH OUT FOR:
That knockdown in the first round which continues to stir debate. After 35 seconds, Benn – after being caught flush as he performed his customary bobbing and weaving on the ropes – dropped out of the ring and on to the apron. He beat the referee’s count, and came back strongly, but the American’s corner screamed that Benn had been the beneficiary of a long count.

DID YOU KNOW:
Two weeks later, Gutteridge would go to Buckingham Palace to collect his well-deserved OBE. As the Queen pinned his medal to his chest she said to him – in reference to McClellan’s life-changing injuries and new calls for boxing to be banned – ‘Your game is in a bit of trouble.’

A HEAVYWEIGHT slugfest of the ages. Both fighters had things to prove heading in: Holyfield – after going 12 rounds with ageing duo George Foreman and Larry Holmes and struggling with late substitute Bert Cooper – was thought to be on borrowed time as world champion; Bowe, meanwhile, was the young buck on the way up with unanswered questions about his resolve. In the end, both showed exactly what they were about. Holyfield gave his all, rallying back with astonishing durability, while Bowe – whose heart had been questioned since he lost to Lennox Lewis as an amateur – produced the best performance of his entire career.

WATCH OUT FOR:
What else but that 10th round, which is rightly regarded as one of the most thrilling three-minutes in heavyweight history. Holyfield looked to be badly hurt by a right uppercut but, as Bowe applied more pressure, the champion roared back. By the end of the session it was Holyfield who was firing the fastest.

DID YOU KNOW:
After the bout there was a party to celebrate Bowe’s victory. But the new champion was in pain. He decided to wear a tracksuit rather than anything flash and he appeared in the Las Vegas ballroom clutching an icepack that he would dab on to his swollen face. Bowe would stay for a few minutes before heading to the suite of his manager, Rock Newman, to watch a tape of the fight.

YET another beyond brutal encounter which edged Bowe-Holyfield as your Desert Island Fight of the nineties. This would be the last time we would see Meldrick Taylor at his dizzying best. Handsome, flashy and overflowing with Philadelphian pluck, Taylor took the fight to the unbeaten Chavez. The great Mexican, though being outboxed, expertly hammered his rival’s ribs, arms and face whenever he got close enough to do so. By the final round, Taylor was deservedly ahead but his body was a wreck. Chavez made the breakthrough in the final moments, dropping Taylor before referee Richard Steele made the contentious call to stop the fight with two seconds to go.

WATCH OUT FOR:
That decision by Steele can be viewed repeatedly and each time you draw a different conclusion. The referee’s stoppage was widely lambasted at the time but if the knockdown had occurred at any other moment in the fight, it would not have been deemed controversial. With that in mind, one can argue that the official made exactly the right call.

DID YOU KNOW:
In a press conference the afternoon after the fight, Taylor – who lost two pints of blood – insisted he could have continued but admitted that his attention was taken by the presence of Lou Duva as he stormed the ring. Taylor said he did not hear the referee asking him if he was okay in all the commotion.

EDITOR’S CHOICE
My personal Top 5 for the 1990s:
5) Jeff Harding w pts 12 Dennis Andries
4) Kevin Kelley w pts 12 Troy Dorsey
3) Naseem Hamed w rsf 4 Kevin Kelley
2) Chris Eubank w rsf 9 Nigel Benn
1) MICHAEL MOORER w rsf 5 BERT COOPER
My own personal favourite fight that never fails to entertain me no matter how many times I watch it. There were better examples of skill and longer exhibitions of heavyweight slugging but there’s something about this bout – from the moment Moorer is caught cold in the opening seconds – that gets me every time.

THE HIPSTERS’ CHOICE
You know the type. They know more about boxing than you…
JOICHIRO TATUYOSHI w rsf 7 SIRIMONGKOL IAMTHUAM
Iamthuam – also known as Singwancha – boxed well in the early going before Tatuyoshi turned it into a dog fight in the fourth. The momentum shifted through the fifth and sixth before a body shot from Tatuyoshi dropped his man in the seventh. A follow up assault provided the finishing touches to a thriller in which the WBC bantamweight title changed hands.