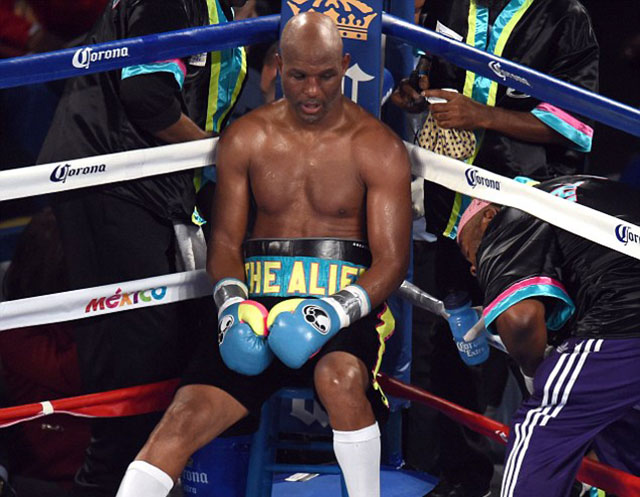 THEY say the last thing that leaves a fighter – after their reactions have faded and their timing has gone – is their punch. But, in truth, the last remaining ingredient is a fighter’s desire to fight.

Bernard Hopkins, 49 years old, and nursing the heaviest, most comprehensive defeat of his long career, has so far refused to accept the journey is complete. Speaking after being dropped and dominated over 12 punishing rounds by Sergey Kovalev in a light-heavyweight unification showdown, a gracious Hopkins admitted he could still fight on.

“I’ve got a lot of time to talk about it,” he said. “I will not disclose anything now. At the moment it’s 50-50 [whether I fight again] but what I will say is that I’ve done a lot more than anybody expected me to do in my career.

Those nine years have been filled with miracles, breaking and setting records. He also lost to Joe Calzaghe and Chad Dawson. But there was nothing like the beating he took against Kovalev. Floored in the first round, he could not contain the Russian and he was almost stopped in the final round. It would be unfair to label this a thrashing like Larry Holmes handed to Muhammad Ali, or Terry Norris gave to Sugar Ray Leonard, but Hopkins – despite bravely becoming the first man to last 12 with Kovalev – soaked up a lot of punishment.

“I’m crazy,” the veteran joked when asked how and why he took so many shots in the final round. “The fans want to see fights, they don’t want to see guys running. I wanted to stay in there, I was hoping [until the end] to get a shot in and maybe I could change things around. I wanted to go ahead and engage because he was engaging and that’s what the fans want to see.”

FULL RINGSIDE REPORT FROM ATLANTIC CITY IN THIS WEEK’S BOXING NEWS, established in 1909 and the longest running publication on the market and available every Tuesday. SAVE MONEY and GET THE BEST COVERAGE EVERY WEEK.