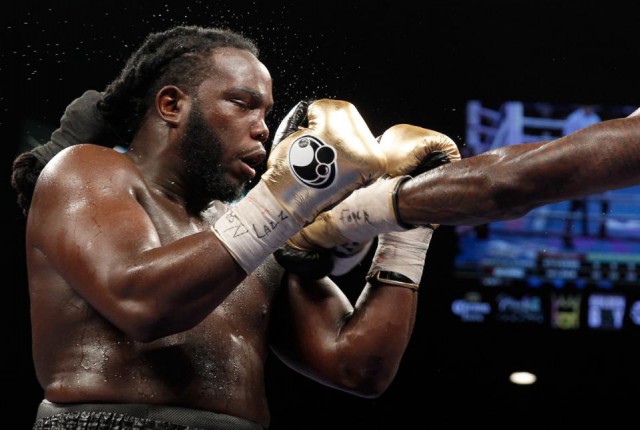 Here’s what they had to say:

“We called this press conference because the Bermane we saw on Saturday night was not the Bermane we all know. Deontay Wilder did a very good job; this is not a press conference for excuses, it is for fact. The doctors at the hospital of the UMC said that he had a severe case of dehydration. His muscles were not working and they thought he had blood in his urine, so they took some tests and held him in the hospital until this morning [Monday].

“We want to applaud Deontay Wilder for doing his job, but the man before him was handicapped and unable to do his job, but that should not take anything away from his victory. Deontay performed and did a great job. It is unfortunate, but Bermane will have to do it another day. Knowing the champion we have in Deontay has so eloquently stated that he will take on anybody, I am certain without any equivocation he would grant a rematch with the real Bermane than the man who was handicapped in the ring, not taking away the victory he had and the way he shined.

“We praise Deontay and hope he can be champion long enough to where we can have a rematch of the ‘Return to Glory.’

“Just like our great military, when they get knocked down, they get back up again. Even with his severe dehydration Bermane still stood there for 12 rounds.

“We want to thank Richard Sturm, President of MGM Grand entertainment and Stephen Espinoza with SHOWTIME Boxing for playing a major part in getting this program together. We applaud both our staff and the MGM staff for doing a commendable job for making this happen. The spirit for ‘Return to Glory’ was high. We had a great card with Amir Imam in the fight of the night, getting knocked down and getting back up. All of the fights were exceptional. It was a good night of boxing for the fans and that is what we are really about.

“Don House so eloquently stated the health of Bermane is so important so when I found out he was in the hospital, I went to stay the day there with him because usually we just send them to the hospital to get checked out, but they decided to hold him. When they decided to hold him, I had to get over there and see my fighter. The staff was terrific and very gracious to me and very definitive about what could be wrong and investigating all aspects. They said he is healthy and should take off a month or so to get some rest and then get to work to prepare for his return to glory and recapture the heavyweight crown that is currently held by a great champion named Deontay Wilder.”

“I want to apologise for not making the post-fight press conference. Unfortunately I was not able to perform in the fight like I wanted to due to severe dehydration and muscle damage. I did not know it was that serious until they told me. I could have died from it. I am happy to just be myself, walk and talk again. Thank God for this, that’s really what matters to me to be healthy right now.

“I did not know the severity of it Saturday night. I was able to give the people a good show, 12 rounds of boxing. If I had to do it again I would do it again. This is not the end for me. I will give it a couple weeks and then get back to work. I have a vision for this, but right now it’s just on pause. It’s just a matter of time before I will get back on my feet and walk again. When it comes to my health, I have been released from the hospital. They would not let me leave until I was sufficiently hydrated. I am grateful. Thank you to my promoter and trainer, everyone who has welcomed me.

“To my fans, I apologise for not being able to perform like Bermane usually does. I know that people who really know me, know how I fight. My last fight with Chris Arreola, I gave you a good show. It is unfortunate that I couldn’t do what I wanted to do with my fight with Deontay Wilder. I want to congratulate him, he fought a good fight. Hopefully somewhere in the future we will meet again.

“Thanks everyone for coming out to the press conference, I am back on my feet 100 per cent right now. I just need a couple of weeks or a month of rest to be back where I left off.”

HOW THE DRAMA UNFOLDED

“Thank you guys for coming out. The most important thing is that Bermane is OK. That is my main concern. I noticed somewhere in the fight, probably around the third or fourth round, something wasn’t right. Even though he told me he was OK, we all know Bermane. I don’t mind losing a fight, but I knew something wasn’t right, so I was very concerned. Around the ninth or 10th round I was thinking to stop the fight because you don’t have to continue, but he wanted to keep fighting.

“You didn’t see Bermane, you saw maybe 10-15 percent of Bermane. I really believe and really felt this should have been a decent fight for Bermane, but would last four rounds or less because his power and speed. We never underestimated him. We trained as if he was fighting King Kong. I train every fighter like that, underestimate no one. But Saturday night, we had about 15 percent of Bermane.