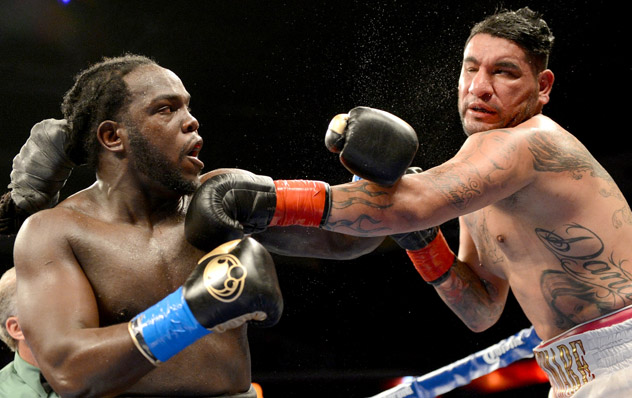 THE much anticipated WBC heavyweight title showdown between champion Bermane Stiverne (above left) and mandatory contender Deontay Wilder will take place on January 17 at the MGM Grand in Las Vegas.

The fight was confirmed in October, but it has taken a while for the date and location to follow. It will be promoted by Don King, in association with Golden Boy, and the veteran matchmaker was typically excitable as the announcement was made.

“This will be a momentous day in heavyweight boxing history,” stated King, who handles the champion. “Just more than 40 years removed from the Rumble in The Jungle with Muhammed Ali and George Foreman, the heavyweights, WBC world champion Bermane Stiverne and Deontay Wilder, will ‘Return to Glory’ live at MGM Grand on Showtime.

Ali-Foreman was ranked No.31 in the Boxing News 100 Greatest Fights of All-Time. Order your copy here

“The little guys in boxing are great, but it’s the heavyweights that have always excited fans the most. Bermane, he’s a knockout artist just like Mike Tyson. Wilder, he talks trash, but is a good fighter, too. This is a must-see fight. The heavyweights are back and ready to ‘Return To Glory’.”

Golden Boy boss and Wilder promoter, Oscar De La Hoya, said: “Fight fans across the United States have been clamouring for an American heavyweight champion for nearly a decade, and Deontay Wilder may well answer their wishes on January 17. Stiverne brings power and experience. Wilder brings power and youth. This is set up to be an explosive fight that I can’t wait to see.”

The unbeaten Alabama slugger has been widely criticised for taking the easy route to the title shot, but at 32-0 (32) there can be no questioning his power, or the potential excitement that lies ahead if he proves to be the real deal.

“I can’t help that I always knock my guys out,” Wilder said. “It’s not my fault I make it look easy. When I knock Stiverne out I don’t want to hear any whispers. I don’t want to hear people say that he was a bum. I want the world to bow down and praise the heavyweight champion of the world. They have to finally admit that I’m just that good.

“Now I can make all my dreams come true, I can make it a reality. America is yearning for a heavyweight world champion. We haven’t had a real one since the days of Mike Tyson and Evander Holyfield. Everyone just sits back and remembers the glory days. America has been waiting for their champion and I’ve arrived.”

Holyfield-Tyson was ranked No.22 in the Boxing News 100 Greatest Fights of All-Time. Order your copy here

Stiverne, who won the title vacated by Vitali Klitschko with a savage stoppage of Chris Arreola in May, is equally determined to prove his worth as a heavyweight force.

“Don’t blink on January 17.  I am the heavyweight champion of the world and nobody is going to beat me. I’m excited and I’m looking forward to making a statement. Talk is cheap. I do my talking in the ring,” he said.

“I’m all business. The only time he’s going to get my attention is the night of the fight. I promise you, he will get more than he bargained for and more than he’s expecting.”

The full card has not been announced, but Leo Santa Cruz is expected to defend his WBC super-bantamweight belt in chief-support.