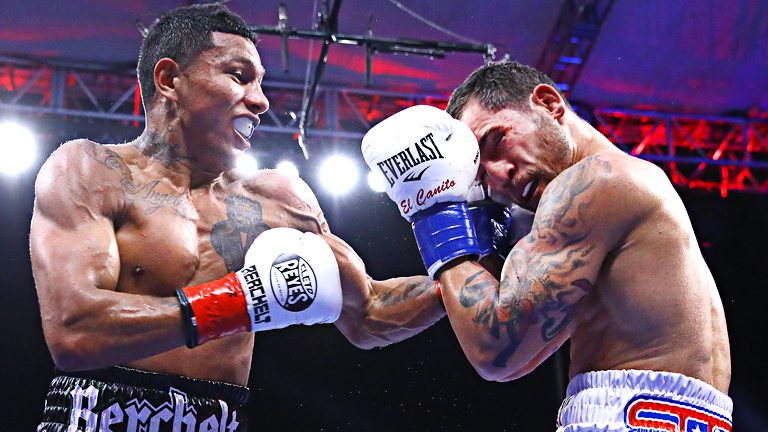 MIGUEL BERCHELT took care of business, halting Jason Sosa at 2-56 of the fourth round at the Dignity Health Sports Park (Top Rank). He then joined the rest of the boxing world in watching fellow Mexican Canelo Alvarez stop Sergey Kovalev in Las Vegas.

It’s a shame that Berchelt’s bout slipped under the radar in that the WBC super-featherweight champion, making his sixth defence, should be a prime candidate for pound-for-pound lists, yet is overlooked because of a lack of high-profile fights.

The Sosa match did not change that. Although the challenger from Camden, New Jersey was a top 10 contender, he was a prohibitive underdog going in, but to Sosa’s credit he came to win and brought out the best in Berchelt.

Sosa carried the fight to Berchelt and was highly competitive in the opening frame, stunning him with a left hook and a right uppercut. Berchelt moved and jabbed wonderfully, but Sosa’s pressure forced him to box less and fight more.

However, it quickly unravelled for Sosa in the second round. Backing off, he was clipped with a left hook, went down and was never the same again. Berchelt then became relentless in unloading his full arsenal. One right landed that drew a gasp and made you wonder how Sosa stood up to it.

Sosa bravely moved forward in the third but was picked apart. In the fourth, Berchelt was a punching machine. It should have been stopped shortly before a left to the body and a right to the chin dropped a bloody Sosa.

Referee Jack Reiss allowed it to go on, asking Sosa after he regained his feet if he wanted to continue. Fighters of Soto’s ilk will never voluntarily surrender. They must be saved from themselves.

Fortunately, Soto’s corner intervened and it was then halted.

Berchelt’s KO percentage is third of all active world champions, behind only Artur Beterbiev and Deontay Wilder. Statistics can be misleading, but in his case they are not.

Tokyo’s Hiroki Okada never made it out of the gate against Javier Molina, being stopped at 1-05 of the first round of a scheduled 10.

Molina, a 2008 US Olympian, has been waiting his whole career for a breakthrough fight of this magnitude.

He was well warmed up and ready to go, Okada not so. A left hook to the chin and a right to the temple dropped Okada, who could not regroup after regaining his feet. The Californian forced him back and landed well to the body, before coming over the top with a right which dropped Okada for the second time. Referee Raul Caiz then called a halt.

Don’t believe Alex Saucedo when he says his first career loss to Maurice Hooker last November was just a little bump in the road. It was more like a giant pothole in that Saucedo took a year off before returning on this bill.

Top Rank, who had big plans for Saucedo before he lost to Hooker, gently brought the fighter from Oklahoma City back against Pennsylvania veteran Rod Salka, whom he stopped at 2-17 of the first round of a scheduled eight.

After getting hit with a left hook to the body, Salka turned his back on Saucedo, took a couple of steps and went down. Referee Edward Collantes then stopped it without giving Salka the benefit of a count, but it did not look like it would have mattered anyway.

Australia’s 2016 Olympian Daniel Lewis was too strong for Texan Alexis Gaston, unanimously outpointing him over eight rounds by scores of 79-73 (Pat Russell) and 80-72 twice (Alejandro Rochin and Rudy Barragan). Thomas Taylor refereed. Lewis came forward and outworked Gaston, but was staggered right before the final bell.

Shoki Sakai is from Tokyo, but practises his craft in Mexico City, under the tutelage of trainer Nacho Beristain. He gave it a good try against Armenian Gor Yeritsyan, grunting with every punch he threw, but came out on the short end of a unanimous eight-round decision, scored 80-72 (Mr Barragan), 79-73 (Kathy Leonard) and a flattering 77-75 (Lou Moret). Mr Taylor refereed.

THE VERDICT: Berchelt has so far not received the attention his ability warrants.