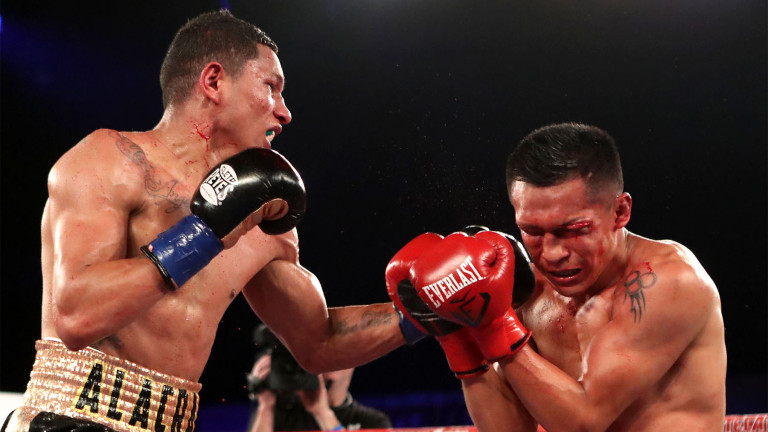 IT is often said rematches in boxing have a tendency to go the same way as the first fight, and so it proved tonight (May 11) in Tucson, Arizona.

Before a crowd of of almost 4,500, Miguel Berchelt successfully defended his WBC super-featherweight title with a sixth-round stoppage of Francisco Vargas, improving on the 11th-round knockout he secured against Vargas to win the belt in 2o17. Meanwhile, Emanuel Navarrete also improved on past form as he stopped Isaac Dogboe in the 12th round of a WBO junior-bantamweight title fight, a result that supersedes the decision he scored over Dogboe last December.

Understandably, both Berchelt and Navarrete, two talented Mexicans, were overjoyed with their performances. In beating their opponents, former world champions no less, in more comprehensive fashion second time around, Berchelt and Navarrette not only retained their respective belts but confirmed their superiority. Rest assured, there will be no need for fight number three.

“I did what I said I was going to do in the ring,” Berchelt, 36-1 (32), said. “I want to thank Francisco ‘Bandito’ Vargas. He’s a true Mexican warrior and he gave me my first opportunity at a world title. So, it was only fair that I would give him a shot to win his world title back. But his corner did the right thing in saving him from more punishment.

“I want to prove that I’m the best 130-pounder in the world. In two weeks, it will be Jamel Herring taking on (WBO champion Masayuki) Ito. I want the winner of that fight because I don’t want to leave any doubt as to who the best super-featherweight in the world is.”

So dominant was Navarrete, 27-1 (23), in his victory over Dogboe, the fight was eventually brought to an end after Dogboe’s trainer and father, Paul, decided to throw in the towel during the final round.

“It really surprised me that he took so many hard shots, but, at the same time, he continued to throw strong punches,” Navarrete said. “I want to thank Dogboe because he gave me the opportunity to become a world champion, and now, in this second fight, he gave me the opportunity to demonstrate that my first triumph wasn’t by accident and that there is a reason why I have the title.

“And to all the fighters at 122 pounds, I tell them that if they want my title, they can come and try and take it. ‘El Vaquero’ is here!”

Ghana’s Dogboe, who landed just 121 punches to Navarrete’s 314, gave his opponent plenty of credit but said his battle with the weight was a detrimental factor on the night. Done with super-bantamweight, he says his future now lies at featherweight, not that Navarrete, seemingly the scourge of Isaac Dogboe, will care one bit. For the Mexican City man, it’s very much a case of job done.