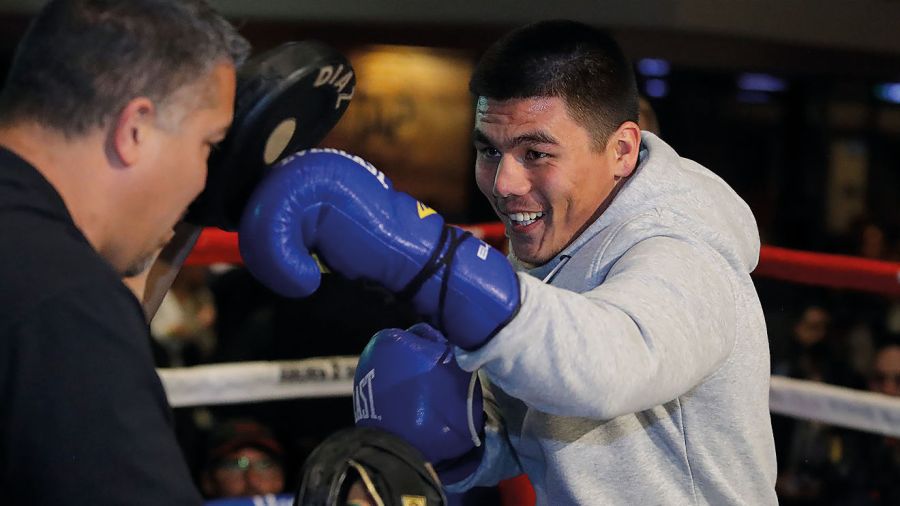 'Maybe I’ve stopped 500 guys with body shots, in fights and in sparring. It’s so easy for me.' Bektemir Melikuziev speaks to Phil Rogers

A LIFE at the furnace had always been the plan. For years the town of Shoimbek in Uzbekistan had been home to a family raised to thrive around spark and steel. To follow in his elders’ footsteps the heat would need to become bearable, the pressure to match artistry with brawn second nature.

“All of my life is connected, one thing leading to another,” Golden Boy’s super-middleweight prospect Bektemir Melikuziev tells Boxing News. “My family are four generations of blacksmiths. It’s in my blood, that power in my fists.”

But a different kind of fire was being stoked in the young Uzbek, not one fanned by the roaring bellows of his father’s workshop but from the pure adrenaline of his wild adolescence.

“I was like a hooligan, having trouble with my discipline and loving the fights. My dad, all his life he wanted one of his sons to be an athlete. When he saw me putting hands on my older brothers, beating them up, he said, ‘Okay, let’s see with this one!’ But our city had no gyms, nothing for combat sports. The only one they had was for karate, and the coach was my father’s friend. So I went to him and started training. He brought me to my Olympic medals, everything. I did everything as an amateur with a karate coach.”

Indeed, the tearaway known locally as “Bek The Bully” was quickly discovering that pulverising neighbourhood street urchins was easily transferrable to the boxing ring. A gold medal at the Youth Olympics was quickly followed by gold at the Asian championships, silver at the World championships and silver at the 2016 Rio Olympics. With unconventional trainer, Maruf Akhmedov, honing the fundamentals and sharpening his natural gifts, Bek was proving to be one of amateur boxing’s most fearsome fighters, not least because of his feted body punching.

“From the beginning you can see why everyone said I have an awkward style. Because I fight to boxing rules but everything else is karate!” laughs the 24-year-old.

“I would say that I was always an outside fighter, using distance, moving around. But people were always saying in the amateurs that I have this power which is helping me to win the fights by stoppages. The way that I was going to the body was just different, and people don’t know how to protect themselves from those shots. I cannot even say the number, maybe I’ve stopped 500 guys with body shots, in fights and in sparring. It’s so easy for me. I just see those punches, I see those spots as the easiest spots to get. The head moves but the body is always there.”

His decision in 2019 to turn professional was influenced heavily by the recent influx of Uzbeks (Giyasov, Akhmadaliev, Jalolov and Madrimov) to Joel and Antonio Diaz’s revered gym out in the Californian desert. Away from the pressures of an expectant homeland, Bek has welcomed the support his fellow countrymen as he continues his transition into the big leagues. But undoubtedly the biggest influence on his fledging professional career has been his training team.

“Joel is always the guy who speaks and motivates you. He’s more like a technical guy. Antonio has a lot of experience, he teaches us the true Mexican style, about being rough and clinches and inside work. I never knew that at all. I never fought on the inside, never. My style is the opposite to that. So what I like best of all is that they’re not trying to change me, just add things. The rough edges that I have they try to smooth.”

The development of this skillset has been coupled with a more refined and focused mentality, one that’s hungry to learn from the other young lions operating around him.

“I’ve just become a more disciplined fighter. I’ll be honest, in the amateurs I could start training four or five days before a tournament, go out there, and win three fights with three knockouts. I just felt so much better than anyone else. But here I’ve worked with some top guys, like [David] Benavidez, and I can see we need to train, we need to be prepared to go rounds. The distance is very different, the boxers are more stationary. You have to waste less energy. It’s a learning process.”

So far the results of the Diaz brothers’ project have been practically flawless, with five victories and four KOs. Indeed, the spectacular nature of his performances have led to Golden Boy matchmaker, Robert Diaz, talking up a fight with another power punching prospect who’s been making headlines, Top Rank’s KO artist, Edgar Berlanga Jnr. It’s a potential opponent that the Uzbek scoffs at.

“I’ll be honest, I don’t rate him as some top guy,” he declares. “Would I fight him? Of course I would. If he’s as good as everyone is saying then maybe we’ll meet each other later for a title. But right now my priorities are the guys with names who’re holding something that I can take from them. If knocking out guys who stand in front of you is something you get ranked for then I had more than 200 guys knocked out in my amateur career.”

Melikuziev’s eagerness to leap up in class and risk his undefeated record is typical of the Uzbek stable he works from. The targets in his mind are specific, famous names with impressive resumés who’ve held world titles in their hands.

“There is a big possibility that I can fight either [Sullivan] Barrera or [Sergey] Kovalev at 175lbs, and I would move up to 175lbs for that too. Not a problem,” he proclaims.

“Both guys are right now with my promoter. The fight was offered and looking at the situation with the world right now that could be our next fight after this. So I’m ready. You have to understand me, I’m very ambitious. I’ve been highly ranked and I’ve fought great fighters. I’m not stupid, I understand that it takes time. But it doesn’t change that I’m a fighter, and I want to become world champion. This is my number one goal. After that I want become undisputed champion. And after that I want to become a multi-weight champion. And I won’t agree to nothing less.”