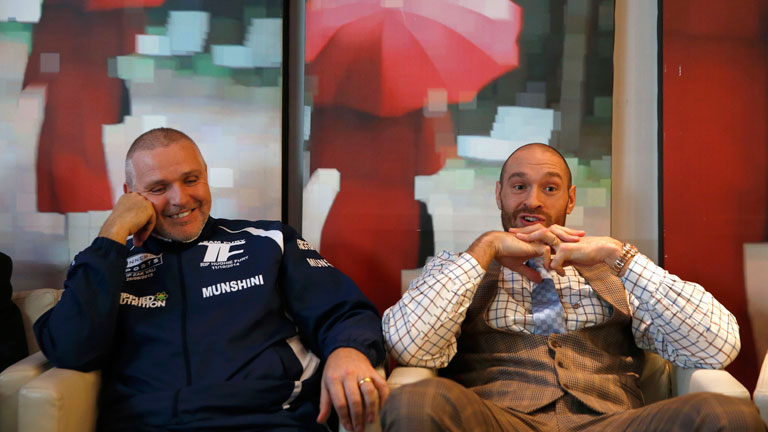 IT was while stood in the car park of Düsseldorf International Airport, suitcase in hand, protected from the bitter cold by a coat a size too big for me, that I realised the Daily Mail and the pre-fight back-stabbers were wrong and that Tyson Fury, in his own XXL coat, gloves and wooly hat, was every inch the heavyweight champion of the world in waiting.

I’d seen him pose for photographs with cautious German folk at baggage claim – some of whom knew his name and his goal, others simply in awe of a giant among mortals – and I’d seen him duck his head and slink into a large people-carrier along with his father John, uncle Peter, cousin Hughie and advisor Asif Vali.

But nothing could prepare me for what was to come. It was Sunday. Six days from fight night. The team, one that would drastically increase in number as the week progressed, were in town. Yet, Asif aside, the core members were abnormally large physical specimens, the kind that would require two of me to complete a hug, which spelt bad news for the straggler who’d arrived in Germany at roughly the same time as them.

“Sorry, there’s no room in the car,” Asif said to me, arms outstretched, as he’d just finished loading the last of the Furys’ bags into the boot. “But if you wait an hour, there’ll be another one of these [vehicles] on its way.”

I nodded, stepped back and pulled my hood over my head, thankful for its fur rim.
The plan had been to travel with the Furys to the same hotel, but, aware of the magnitude of the task facing them, I wasn’t going to argue my case. Nor was I prepared to find a spot in the boot.
“Ok,” I said. “I’ll wait.”

So I did. Asif jumped on board, the lights of the car signalled its imminent departure, and I clasped my hands together and blew in the gap created between them. It was nine o’clock at night, close to freezing, and I braced myself for the longest hour of my life.

Then, however, the door opened and a large limb appeared. It was a foot, followed by a leg, and both belonged to Fury. His upper body and face, half-covered by his hat, swiftly followed. “Get in here,” he said. “We’ll move some stuff around. You’ll fit.”

Taken aback, my initial reaction was to say I would happily wait. It was, after all, he who had a world heavyweight title fight in a matter of days, not me. It was he who needed space and minimal fuss. What was another hour or so wait to me?
But Fury was insistent and Asif, eager for them to get moving, by now had my bag and suitcase in his grasp and was finding a space for them in the car. With that, I too was shoved inside, squashed between Tyson and Peter, and we were on our way.

Further thank-yous followed, for I was truly grateful, and Fury, eyes on his phone, shrugged it off as though he simply had no choice in the matter. But, make no mistake, he did. And it was testament to his generosity that he decided to surrender vital leg and arm room for the sole purpose of not leaving me stranded in a foreign country. Other fighters, I’m sure, wouldn’t have been quite so accommodating; when fight week arrives, a single-minded drive, used to get them through the grind of training camp, makes way for unapologetic selfishness which can offend and hurt even those close to them. Fury seemed different, though.

Utterly relaxed, we discussed our respective flights, the joys of a relatively short trip – “Better than going to somewhere like Vegas, eh?” – and his many prior trips to Germany, at least one of which was to train alongside Klitschko under his late coach Emanuel Steward. Fury, it should be noted, was a fan of Germany and the Germans, as I suspected having observed him at baggage claim, but was in no rush to sight-see after the fight. “For some reason I don’t like hanging around after a fight,” he said. “I don’t want to explore the country or do anything like that. I just like to go there, do my job and leave straight away. If I had a ‘Batmobile’ on standby outside the venue, I’d jump in that and go straight home.”

“Maybe it’s because you associate the location with the fight – something that can be a cause of stress for some people,” I suggested.

“Not for me,” he said. “I once read that Mike Tyson booked his flight from Tokyo to New York for something like two hours after his fight with ‘Buster’ Douglas. He just couldn’t wait to get out of there. I’m the same.”

“It showed the state of his mind…”

“He thought it would be an easy fight, a blowout,” said Fury. “Everybody did, didn’t they? But boxing doesn’t work like that. Every dog has its day and that day belonged to ‘Buster’ Douglas.”

Muhammad Ali once said kindness to others is the rent we pay on earth. Well, Fury was kind, that much was clear, but I still had no idea whether he’d go on to produce arguably the heavyweight division’s greatest upset since Douglas had his day or be found horribly out of his depth. I was as clueless as anyone else. What I did know, however, was that if he did achieve the unthinkable, and topple a great champion undefeated for over 11 years, he’d certainly fit my criteria for world heavyweight champion in 2015. Enormous? Check. Entertaining? Check. Engaging? Check. Kind, too.

Once back at the hotel, Peter, perhaps noticing the love hearts in my eyes, shattered the illusion with a cautionary warning.

“Listen, this is the best version of Tyson you’ll ever see,” he said while sat in the lobby. “This is the nicest and friendliest he’ll ever be because he’s got something to look forward to and he feels good within himself. He’s fit, he’s healthy, he’s eating well. But you wait until the fight is over and he’s been home a few days. That’s a different Tyson altogether. It’s hard being around that Tyson.”

Of course, this kind of revelation should come as no surprise to anyone who has tracked Fury’s controversial seven-year professional career. He’s prone to mood swings, his emotions tip-toe along a tightrope and he’s previously revealed he suffers depression in the aftermath of most fights. But when he’s good, he’s really good. And that week I sensed he was going to be really good.

Frankly, his behaviour throughout fight week was exemplary, even in the face of shenanigans involving the gloves, ring canvas and hand wraps, and in the presence of journalists, some of whom (those not present, I’ll hasten to add) had previously stitched him up, he was light-hearted, jovial, accommodating and grateful. Again, for a man in his position – fighting for the world heavyweight title, sat on a multi-million pound payday – such traits, such geniality, should not be taken for granted or downplayed. Rest assured, if he’d been at all awkward or truculent, nobody would have complained.

The next day he sat down for breakfast with his cousin, Hughie, who was nursing an untimely cold, and beckoned a waitress over with a heavyweight champion’s smile.

“I’d like some porridge, please,” Tyson said, looking towards Hughie’s bowl. “But not like his.” Hughie’s porridge was a lumpier take on an old tradition and evidently not to Tyson’s liking. “I’d like it smooth, not lumpy,” he continued. “And could I have semi-skimmed milk instead of that soya milk stuff? I don’t know how you eat that, Hughie.”

Hughie shrugged. Eyes sunken, cheeks red, nose blocked, I’m not even sure he knew what it was he was eating. “You look awful,” Tyson offered by way of reassurance.
“Make sure you stay away from me, ok?”

The porridge arrived minutes later and Tyson inspected it as though it were a pair of Paffen boxing gloves. A frown formed across his brow. “It’s still a bit too lumpy,” he said. “Can I have it smoother?”

“I’m sorry,” said the waitress, and off she went.

Next time there was a different problem. First came the frown. “It’s cold,” he said. “Can you heat it up again? Maybe for a couple more minutes…”

“I’m so sorry,” said the waitress.

Off the porridge went again, while Tyson turned to Hughie. “We should be careful what we eat in here, shouldn’t we?” he said. “We probably shouldn’t even be eating here actually.”

“The Klitschko camp could try to slip us something in our food.”

“They could give me something that makes me box rubbish on the night.”

Soon enough the porridge was back. Tyson hoped it hadn’t been tampered with, and that it was by now smooth and warm. Thankfully, it was. “I’m sorry for the wait,” said the waitress.

The waitress laughed and the fighter grabbed a spoon. The same mistakes were never made again; Tyson ate porridge every morning, warm and smooth, and Hughie, kept at arm’s length, gradually started to feel better.

As a team, as a family, the Furys often sat at the back of the hotel restaurant gorging on breakfast, lunch and dinner, and each time they did so you could hear the bellowing voice of John Fury from the lobby. Conversation around the table was seemingly forever centred on boxing and boxers – they spoke of little else – and the focus got narrower still when they’d discuss Wladimir Klitschko and dissect and disregard his record, analysing, in great detail, previous opponents he’d conquered.

It was all a shock to me, for I’d long been under the impression that the sport itself and the fight on the horizon were the last things any fighter voluntarily chose to discuss during fight week. Not Fury, it seemed. Perhaps that’s what they mean by “true fighting men”; boxing on the brain, 24-seven. Even guests of the hotel could join in. The people’s champ, if not yet the actual champ, the 27-year-old was preparing himself for what was to come. He was getting ready for his role.

On November 28, 2015, Tyson Fury did indeed become world heavyweight champion. He used his height, reach, legs, lateral movement, feints and no shortage of punches to defuse and dethrone Wladimir Klitschko in front of 50,000 fans at the ESPRIT Arena; masterful to some, uneventful to others, Fury nevertheless succeeded where everyone else said he’d fail and, in winning a clear unanimous decision, became only Britain’s third linear heavyweight champion of the world (following in the footsteps of Bob Fitzsimmons and Lennox Lewis).

He should have been celebrated and respected. Yet, despite the triumph, and despite the many nuances involved in making it happen (lost on many who will now write about him), Fury remains a polarising figure, a pariah, as football writers have you believe he’s the heavyweight champion Britain never wanted, a narrative pushed by people who have never spent time around Fury, let alone seen how wonderful he was during fight week.

For those who did witness it, though, there’s surely no better man for the job. And by the time he did what he said he’d do and prematurely fled the hotel on Sunday morning – jumping in a car with his wife, Paris, to drive 140 miles to Rotterdam before boarding a ferry to Hull – everyone left behind, whether British, Irish or German, were sad to see him go.