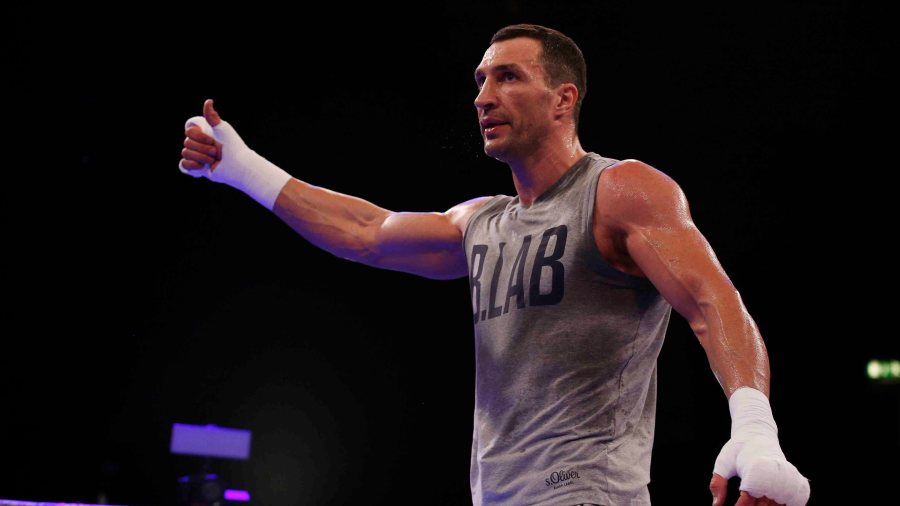 IN case we needed any further evidence, Wladimir Klitschko again went out of his way to prove he is #obsessed when it comes to #JoshuaKlitschko. A challenger for the first time in over a decade, and an underdog for the first time full stop, the Ukrainian – labelled a control freak by several who have spent time with him – seems intent on unnerving Anthony Joshua while working hard to retain the respect that has so far been the theme of this promotion.

At the public workouts at Wembley Arena on Wednesday night – moments away from the Stadium where the heavyweight rivals will fight on Saturday – Klitschko entered the ring alongside a table and chair, which he duly plonked himself upon and had his hands wrapped for what felt like an eternity. A check of the watch revealed it was ‘only’ 25 minutes, but it was enough time to push back Joshua’s scheduled appearance and bore the crowd senseless.

But Klitschko has never been concerned with keeping the fans entertained. What he has always been exceptionally good at – since 2005 at least – is doing exactly as he pleases, and whatever is needed to win, whether it’s easy on the eye or not. And it certainly appears that the veteran, aware he is not the ‘home’ fighter in arguably his most important fight, is doing everything he can to get under the skin of Joshua in the build-up, without actually appearing to do anything at all.

By the time he got around to it, the 41-year-old – possessing a physique at the top of every 40-year-old’s 41st birthday wish-list – produced an impressive workout. What began as a bizarre, high-tempo dance which doubled as an excuse to show off how supple his ageing limbs are (one perplexed viewer commented on our Facebook Live coverage ‘Wow, is he having an epileptic fit?’), ended with Klitschko engaging in two three-minute rounds of quality pad-work with trainer Johnathon Banks which left his vest, and his #obsessed tagline that was emblazoned upon it, drenched in sweat.

“Mind games?” Klitschko replied when asked if that was the purpose of his drawn out preparation. “There’s no mind games.”

“You will see [on Saturday night] Wladimir Klitschko enjoying himself, I’m enjoying myself right now, I’ve loved every minute of it.”

Is the plan to take Joshua into the late rounds? Is that when the fight becomes Klitschko’s territory?

“It will be my territory from the start,” the veteran answered amid boos from the Joshua faithful. “Sorry guys.”

The challenger (to his old IBF and now vacant WBA heavyweight titles) then took his place at ringside. With manager Bernt Boente behind him, and big brother – and former WBC champion Vitali Klitschko to his right – Wladimir took off his boxing boots and socks, and replaced them with clean socks and a crisp pair of white trainers that had been stored in a large, transparent plastic bag. He slipped on a hoodie, leaned back in his chair, pulled the hood over the top of his head, and focused intently on Joshua’s arrival. As men sitting in chairs go, it was quite a sight.

By now, to great fanfare, Joshua had arrived on the opposite side of the ring where, on a makeshift stage, he skipped energetically. Klitschko watched, his line of sight not once moving from his opponent. The Englishman, smiling into the crowd, ever so briefly stumbled on the rope before shadow boxing as he made his way to the ring with trainer, Robert McCracken.

Perhaps encouraged by Joshua’s not entirely faultless skipping display, Klitschko strutted up to the ring apron, leant on the ropes and stared as Anthony made his way through them. Klitschko nodded when asked to sit back down, but stood there for long enough to show he would sit down whenever he liked – and most certainly not when he was told.

“Preparation is key,” an exceptionally relaxed Joshua would say later about Klitschko potentially playing mind games. “You can’t come here and get injured, we don’t want that, we want a fight.”

Indeed, Anthony only put in a moderate display on the pads himself, choosing to let fly with solitary punches rather than flashy combinations. That decision alone – to not give anything away at this late stage – shows Team Joshua are taking the threat the former champion brings very seriously indeed.

And judging by Klitschko’s behaviour – #obsessed, not to mention slightly psychotic – they are right to do so.