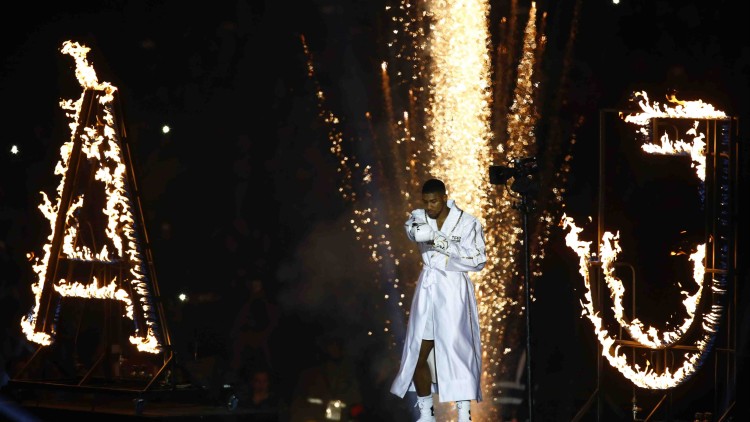 I knew it was going to be big but I didn’t realise how big.

The Anthony Joshua vs Wladimir Klitschko fight week started with the open workouts at Wembley Arena on the Wednesday. I was MCing and I’d done plenty of them before but not like this. Michael Buffer was there which said it all. On a list of things that I never thought would happen to me when I was growing up, being The Buffer’s warm-up act would definitely have been right up there.

Team Klitschko had one side of the ring, the one I was stood at, reserved entirely for them. I found them quite a nervous and intense, although friendly, group. It’s understandable though; if you work for Dr Steelhammer then I don’t think you’d last all that long if you didn’t show great attention to the smallest detail. Wladimir doesn’t like dry ice, I discovered, that had to be turned off well before his arrival.

I saw his brother Vitali standing at ringside, by himself, so I thought I’d go over and say hello. It was a brief encounter as he’s a man of relatively few words. He assumed I wanted a picture and when I explained that I just wanted to shake his hand and introduce myself the Mayor of Kiev seemed to find me quite entertaining, or maybe a bit simple, or very possibly both. I’m not one for selfies though, I have practically no pictorial evidence of any of the things I’ve experienced in boxing but I’m fine with that because I’m confident they still happened, I was there. The elder Klitschko is a very tough looking man but perfectly amiable, as people with absolutely nothing left to prove often are.

Wladimir made Anthony Joshua wait for his turn in the ring, mainly by sitting in it and spending a good quarter of an hour getting his hands wrapped before doing anything else, which was hardly riveting entertainment for the sizeable crowd. And Klitschko stayed to watch AJ’s workout, just leaning on the apron; big brother was watching the man he used to call “little bro” and he wanted him to know it.

The press conference at Sky the next day was equally vast in scale. I was down to commentate on Joe Cordina and Katie Taylor. I’d covered Cordina’s fight the week before and Taylor recently too so was mainly there to catch up with her opponent Nina Meinke. I wandered into the green rooms early on, before the conference had started, and found Freddie Roach and Taylor’s team discussing Conor McGregor and his proposed bout against Floyd Mayweather. I’d have loved to have stayed and listened but sadly it wasn’t really appropriate. I found Meinke next door and she was great company. Unexpectedly she’d done a lot of boxing at Westway BC in Scarborough when she was younger having visited the town as an exchange student, had been working at a Tamworth scrapyard last summer selling catalytic converters and was trained by Sven Ottke, who was very good friends with her Dad. You couldn’t make this stuff up.

Paulie Malignaggi was over working for Showtime and Sky and we had a long chat as we waited for things to get going. He told me Klitschko was, in his opinion, one of the best heavyweights there’s been. No, the Ukrainian wasn’t all that exciting but being exciting and being effective are not the same thing, with the latter being distinctly more important than the former. Wladimir had been so good, Paulie said, because at his best, under Emmanuel Steward, “he knew what he was and he knew what he wasn’t.” The question was; at 41 and after 17 months out what was he now?

If you’d been a presenter on air at Sky Sports on Thursday afternoon then that would have been the time to commit your sizeable error for the year because everyone it seemed was out on the stairwells watching the entrances of the two main event fighters. It was very slickly done. I, like most people, found the whole USB shtick, if you’ll pardon the pun, pretty strange but when you’ve already had 28 world title fights you can do what you want.

I got to the weigh-in early the next day and one of the first things I saw was Darleys Perez checking his weight. You could tell from the sideways glance he exchanged with his trainer that all was not well. They knew it was going to be tight, his team had told me so at the open workout, but it wasn’t for a lack of trying; Perez had been around 150lbs when they took the fight on April 4th, and, having had his previous fight at 140, getting down to 135 again was just too much. Joshua tipped the scales at 17st 12lbs, 10 lbs heavier than his opponent which was a bit of a surprise.

I’m not going to lie, I’m not one of those people who thinks it’s cool to appear blasé about things, walking into Wembley stadium and up to ringside when I arrived at half past two on the day of the fight blew my mind. I hadn’t been there for Froch vs Groves, I’d volunteered to go to Germany to cover Felix Sturm vs Sam Soliman that night as I just couldn’t bear to be around a fight of that size but not be involved in any way. Childish I know, but that’s how I felt at the time. I’d sworn to myself that the next time, if indeed there was a next time, I’d be a part of it, that I’d be ringside. My co-commentator Darren Barker hadn’t been at Froch vs Groves either and he was just as buzzing as me. Everyone was, not a single person had even the vaguest air of “been there, done that” about them, even though most of them had.

I enjoyed commentating on wins for Cordina and Taylor and it was good to get a feel for such a big stage. I don’t suffer from nerves, I enjoy it too much to be apprehensive in any way, but I do always have a good dose of nervous energy flowing through me and on Saturday there was more than ever, it was hanging in the air.

Seats at ringside are at such a premium that Sky put name stickers on all of theirs and I couldn’t help but notice that the name on the seat reserved for Deontay Wilder had been altered by someone to read Beyonce Wilder. I didn’t have to look far for the culprit. I don’t want to name names but he supports Everton and beat David Haye recently.

For the fight itself I had Spencer Oliver and the aforementioned Evertonian next to me on my left, Michael and Mrs Buffer, Andy Scott, Wilder, Carl Froch and Adam Smith in the row in front and the likes of Paulie, Roy Jones, Evander Holyfield and Lennox Lewis to my right. Arnold Schwarzenegger was across the other side of the ring.

Spencer’s known Joshua for a long time and he lived every second of it, letting out anguished groans each time his man got caught by anything at all. The atmosphere was incredible and the fight was spectacular but my abiding memory of it will always be how unbearably tense it was. Heavyweights are so big, so seemingly indestructible and yet so improbably vulnerable, and it’s that vulnerability I think that makes them so fascinating. At any one point the big men are just one clean connection away from disaster and both Joshua and Klitschko walked that path in as thrilling a way as we’ve seen for years.

When it was all over people were physically shaking at ringside, and it wasn’t a conscious act but an involuntary nervous reaction to what they’d just seen.

You might think I’m exaggerating or embellishing but I’m not, it was that kind of night.