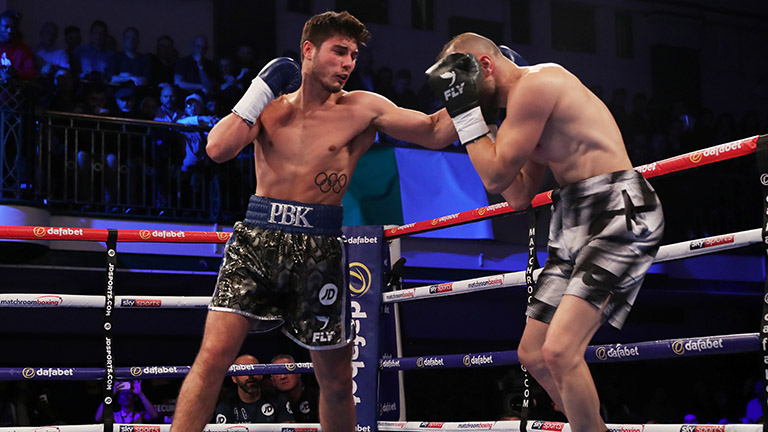 In Clarke's Shoes: Ever wondered what it's like to be under attack from a professional? Andy Clarke finds out

HOW long would I last in the ring with a professional boxer?

It’s a question that pretty much anyone who’s ever pulled a pair of gloves on has asked themselves.

Quite honestly I’d never been all that curious. The reason being that, having indulged in some very mediocre sparring about 15 years ago, I’d always been confident I knew the answer: No time at all. Or more accurately, as long as it would take for one clean punch to land, which would take about as long as the person throwing it decided it would take.

The power generated by pro fighters is astonishing. The sound their gloves make when they hit the bag or the pads tells you that. It’s an emphatic expulsion of air. Accurate and controlled yet unmistakeably dangerous. It’s not the sound that laymen produce, nothing like it. It’s the same in other sports. I remember going to cover the Open Championship when I was a young reporter at Talksport and marvelling at the fizzing sound the ball made when the players sent it flying off the tee. It was due to the purity of the contact they made with the ball and no matter how hard I tried when I next got down to the driving range, I never heard that sweet music following one of my own swings.

But after a while it occurred to me that there was a way that I could get a sense of that power and timing without getting hurt. The body belt.

So this week I trotted off down to Redhill to see Adam Booth and his stable of fighters with a plan in mind. As well as doing some research for the March 31 AJ vs Parker bill, which features Ryan Burnett and Josh Kelly, I could also suggest a little experiment to Adam, which would be to persuade him to let me stick the belt on and take a few to the body. He was happy to oblige, a devilish grin spreading over his face when I explained what I was hoping to do, and it was a good day for it because, as well as Burnett and Kelly, Harlem Eubank was also in for training. And they were all keen. Battering a commentator isn’t the kind of offer fighters get every day and they were curious to know if I’d eaten anything that morning. A hot chocolate and a flapjack I told them. Their interest in my dietary intake was slightly unnerving. Charlie Edwards and Paul Hyland were in too but had taken their wraps off by the time I was ready so didn’t get involved, which definitely turned out to be a good thing.

I’d do 15 seconds with each I said, one after the other, and it was agreed that I should be able to survive that but that I should take a rest between each burst. I hadn’t thought I’d need a rest and the possibility that I’d made a mistake began to occur to me, but there was no going back.

Adam fitted the body belt as securely as he could and then assumed the role of cameraman. Burnett was first. I’d thought it would take him a few seconds to really get going. It didn’t. the WBA Super World Bantamweight champion, who I outweigh by about 4 stone, tapped my stomach once and then started to sink them in. I quickly had to set my feet wide and lean forward just so I wouldn’t topple over, but even doing that I was still giving ground. The power was absurd, that’s the only word I can adequately use to describe it. I started to think of Zhanat Zhakiyanov, and Lee Haskins, who I’d seen take it for 12 rounds each. I mean, they look like normal people, so does Burnett, but they aren’t, they can’t be.

I, on the other hand, am, and at the end of 15 seconds I was feeling pretty uncomfortable to say the least. Step forward Harlem Eubank, a Super Lightweight and so roughly a stone and half heavier. Again, he gave me a few taps and then got stuck in. Eubank hit me straight to the solar plexus, as my good mate Ron McIntosh would say, more often than Burnett and it sent me back towards the ropes. I could feel my breath getting knocked out of me and beads of sweat starting to form on my forehead.

Last but certainly not least was Josh Kelly. At Welterweight another half stone heavier, and after a cowardly bit of stalling on my part, he stepped up. Before long I was on the end of a seemingly interminable succession of lefts to the rib cage. As I felt my flesh reddening beneath the belt, and the bile beginning to rise in my throat (Peruvian dark chocolate) all I could think of was Tom Whitfield. I’d seen Whitfield felled by Kelly the previous June in the first round of their fight due to a supersonic series of lefts to the head. He’d managed to take about 10 before slumping to the canvas. How the hell had he even taken one? I was a couple more from surrendering when Adam called time. Then just as I was recovering all three of them tumbled me into the ropes and let me have a few more for good measure.

I can honestly say it was good fun. But if I hadn’t been wearing the belt I would have got no further than the first meaningful punch from Burnett. I’m in reasonably good shape for a civilian but it would all have been over at that point, no question about it. Observers like me see thousands of punches thrown and a lot of them don’t look like much, even at ringside. But that’s only because we’re watching them being traded by people who have the capacity to take them and, most of the time, give no reaction whatsoever. It makes us think that we could do the same, that we could take the odd body shot, the odd jab, that we could clinch and wrestle and maybe even get through a round. If you’ve ever thought that then you’re wrong; so, so wrong.

You’d be cut down in a matter of seconds.

If you don’t believe me then have a look at my Twitter- @MrAndyClarke:

So here’s a taste of me getting bashed up by @ryanburnett01 @HarlemEubank and @JOSHPBK at @boxingbooth gym yesterday . Full version to follow. RT if you’re a sadist @SkySportsBoxing pic.twitter.com/yi180eXBBB