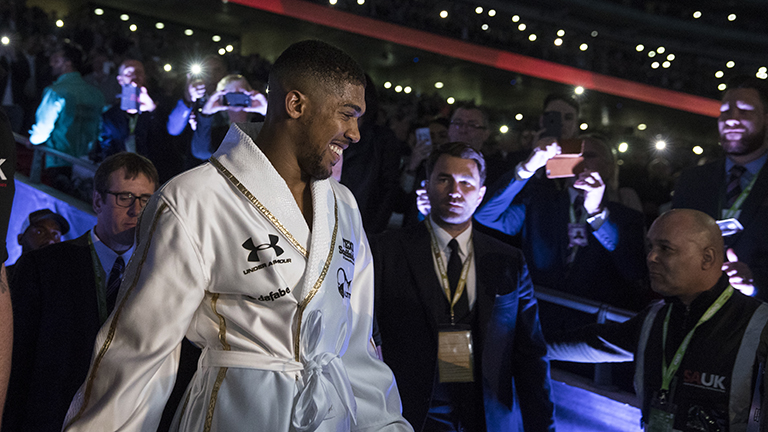 ANTHONY JOSHUA can make the same game-changing impact on boxing as Tiger Woods achieved in golf, according to Barry Hearn.

And veteran promoter Hearn is backing Joshua to achieve his stated ambition of becoming boxing’s first billionaire fighter, in the wake of his stunning Wembley Stadium victory over Wladimir Klitschko.

The 11th-round stoppage confirmed former Olympic champion Joshua as a superstar on the world stage, with the fight instantly acclaimed as a heavyweight classic.

The 27-year-old holds the IBF, WBA and IBO belts now, and offers to stage his next fight are coming in from far and wide, with a possible rematch against Klitschko on the cards.

Hearn is chairman of Matchroom Sport, with son Eddie heading up its boxing division and taking care of Joshua among a stable of fighters.

“The Joshua effect is very similar to the Tiger Woods effect in golf, where people who are not so interested suddenly become interested, where young people become aspirational to follow in someone’s footsteps. For that they need a role model and Joshua is the finest role model I have seen in sport, period. He’s number one.

“I think there’s a trickle-down effect of benefit, not just to Joshua who’s going to be probably the first boxing billionaire if he carries on for 10 years like this and he may do it, he’s probably favourite to do it.

“It can also have an effect on other boxers, on the whole concept of boxing as a sport, of the social benefits and of the opportunity that exists for kids that live the right life. On a social level it’s a watershed moment in terms of perception for the sport.”

Hearn, who was in the thick of celebrations in the ring on Saturday night, swapped Wembley for the Crucible Theatre on Monday as he attended snooker’s World Championship final.

The cue clash between Mark Selby and John Higgins had a lot to live up to, after the thrilling boxing battle.

“It’s so nice as a promoter when fans will say we over hype events and one actually delivers beyond the hype,” Hearn told Press Association Sport. “Saturday night was all about that. It was one of the great occasions.

“I’ve been following fights since I was nine years old, listening and studying the game and it delivered on all fronts.

“I think it was one of the best heavyweight fights. I always thought Ali-Frazier – the trilogy – was the best, but of course there was only one knockdown in the first one, when Ali broke his jaw. I spoke to Evander Holyfield on Saturday night and said to him, ‘Can you remember a world title fight when both heavyweights went down?’, and between us we couldn’t. I was going back in my mind to the Jack Dempsey era.”