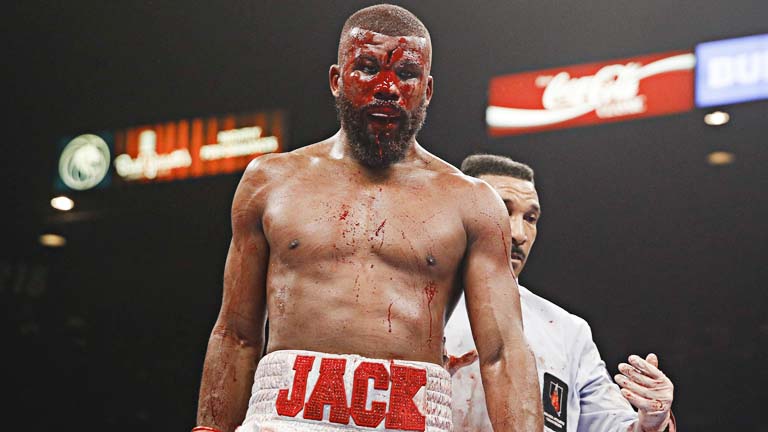 Despite enduring one of the most horrific cuts seen in boxing, Badou Jack is gunning for a rematch with Marcus Browne

AN injury as horrific as the cut Badou Jack suffered against Marcus Browne in January could bring a boxer’s career to an end, especially at the age of 35 and with a sequence of world title fights already behind him.

But Jack intends to come back, targeting a return later this year and he wants a rematch. “I would love a rematch with Marcus Browne,” he told Boxing News. “I had that big cut but it’s healing good now. I think August, September I would love to be back in the ring.”

He is adamant the cut affected his performance and was a key factor in his points loss to Browne over 12 rounds. “Oh definitely. I could barely see I had like a yellow layer over my eyes I was trying to wipe it off it was still there. I mean, I could barely see,” Jack said. “That guy was getting tired and I’m known for finishing strong. This guy has never been on this level before and I thought I could stop him, I’m going to break him down and get him out of there. It was kind of hard. I couldn’t see.”

It was an accidental head butt hat did the damage. Jack had to admit, “I lost a lot of blood, I don’t know exactly how much. But yeah, there was a doctor there, a friend of mine, he said most people if they lose that much blood they’re going to pass out. But it’s amazing that you went 12 rounds with it. I mean half of that fight, I got the cut in the seventh round, it was pretty hard but I’m a fighter, I’m going to keep fighting.

“I’m not going to quit I’m going to continue to fight as long as I can… It was bleeding really bad and I could barely see during the fight but I didn’t know it was that big, that the gap was that big so I just saw it when I got in the locker room so I was like wow.”

The cut needed a lot of stitches. “It was three layers. I don’t remember exactly [how many stitches], between 75 and 100 maybe,” he noted.

He has been recovering and starting to train, though won’t be sparring for a while yet. In the meantime he is starting his own promotional company and will be staging an event in Dubai on May 3. “I wanted to try something different and I’m very excited,” he said. “I think that’d be a great place to start it’s like kind of the Las Vegas of the Middle East.

“I take one fight at a time and see how it goes and same thing with the promotional company we’re going to take one show at a time. This is a learning experience, this is my first show so I don’t really know how things are going to play out, just work hard and hope for the best so yeah, we’ll see what’s going to happen.”

But Jack believes he has learned from his own promoter, Floyd Mayweather. “He’s a little different from other promoters. So I learned a lot from him,” Badou said. “He’s more personal.

“It’s more of a personal thing. Like more of a friendship his promotional thing rather than other promoters, which is just business. So I mean, he has a small team. So I’ve been around him for like seven, eight years now. And I learned a lot from him. So it’s good to have a mentor not just as a great fighter but a good promoter also. [With Mayweather] I think it’s a little bit of everything, both he’s an amazing talent and a great, great fighter, but also his personality and his dedication. He trains like he’s broke like he’s still hungry. You know, even for the [Conor] McGregor fight he trained pretty hard.”

Jack is already thinking about life after boxing. He just hopes he’s learned from the best.