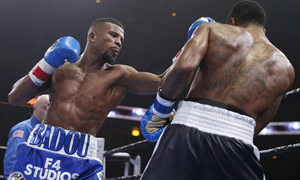 The world super-middleweight champion slams Groves ahead of their fight

BADOU JACK insists George Groves has not riled him ahead of their WBC world super-middleweight title clash in Las Vegas tomorrow night [September 12].

The fight will be Jack’s first defence since dethroning Anthony Dirrell earlier this year and Groves’ third attempt at world honours having twice been stopped by Carl Froch.

After preventing British journalists from watching him train and cutting his media work out short [although most fighters did the same], Jack denies that the Brit has won the mind games.

“Groves is absolutely not in my head. I’m focused and mentally strong on my task at hand. I won my biggest fight that I’ve had up to date, he didn’t. He has had two shots at the title and has lost them both,” he said.

“Groves got famous for getting knocked out by Carl Froch. He’s a good fighter, but I’m very comfortable that I’m going to beat him.

“I just stay focused on what I have to do. No one is getting under my skin.”

With Groves a slight bookies favourite to lift the green belt at the end of the night, Jack maintains he will thrive with less pressure on him.

“I’ve always been the underdog in my opinion. I like it. It motivates me. I’m going to prove my worth Saturday night,” he claimed.

“I’ve always believed in myself. Things happen in boxing. I worked hard and that’s how I got to this moment.

“I’m very excited for this fight. We had a tremendous camp. We’re ready to go. I don’t talk much. I’m all about fighting.”