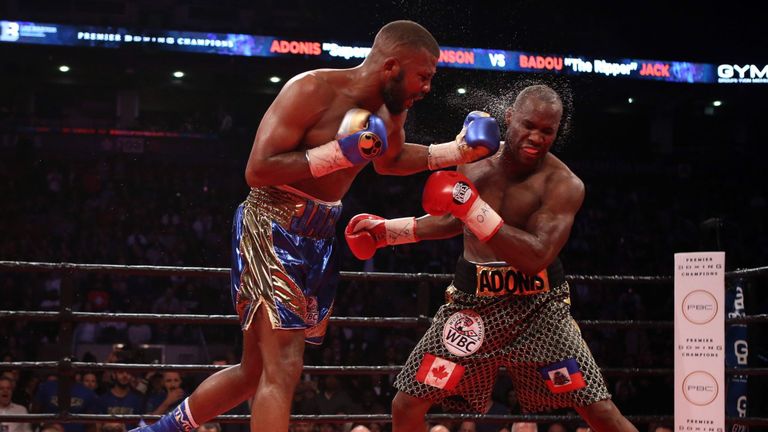 AFTER a bout of see-saw excitement and guts aplenty, Adonis Stevenson clung on to his WBC light-heavyweight title after two of the judges scored his 12-rounder with Badou Jack a draw.

The decision, when one considers the current 10-point must system, was fair yet it was easy to have some sympathy for the challenger, whose periods of domination appeared more telling than those of 40-year-old Stevenson.

The champion made a strong start, though, boxing smartly before the tireless Jack turned things round at the halfway point and by the end Stevenson – in his ninth defence – was reeling under intense pressure.

Jack, 34, was having his second major bout at 175lbs since relinquishing his WBC super-middleweight title last year. His first, a fifth-round stoppage win over Nathan Cleverly last August, highlighted his strength at the new weight yet against Stevenson, particularly in the first half, that resolve was tested.

“I went to the body and saw that he was fatigued,” said Stevenson afterwards. “I had to keep the pressure on him. He’s a slick fighter, a two-time world champion but I felt I won the fight.

“I used both hands. I touched him a lot with the right hand on the body and slowed him down. He tried to come and attack me. I feel like I won the fight but I’ll give him a rematch if he wants it.”

The rematch is a natural after the drama of the second half. The bout swung in the seventh as Jack put his punches together with newfound purpose. Stevenson sagged under their weight, survived the eighth, before a savage uppercut bloodied his nose in the ninth.

But Stevenson, 29-1-1 (24), regained his composure and an element of control in the 10th as he again targeted the challenger’s body. The pair exchanged throughout the 11th yet it was Jack, winded again, who appeared to be wilting suddenly.

However, in the final session the momentum swung yet again as Jack rallied impressively and Stevenson, seemingly on the brink, did well to hear the final bell.

“I thought I definitely won the fight,” said Jack, who drew for the third time in his career. “No judge had him winning. I have no idea why I can’t get a decision. It could be that they’re jealous of [my promoter] Floyd [Mayweather] and don’t like him. I’m one of his top fighters. I can’t do anything about it. I’m not the judge. I have to respect their decision.

“Maybe I started the fight too slow. I gave away those rounds. He didn’t really hit me. I can’t do anything about it, let’s do a rematch in Las Vegas. I came to his backyard, it’s time he comes out to Vegas.”