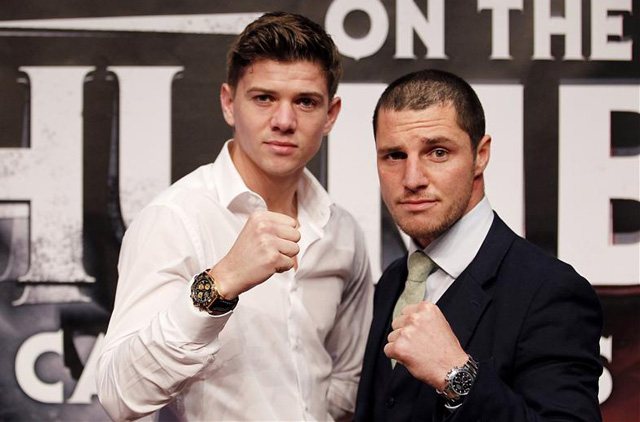 Saturday August 1
8.00pm Sky Sports 1 (LIVE)
LOCAL rivals Luke Campbell and Tommy Coyle clash in the headline bout at the KC Lightstream Stadium in Hull. The vacant WBC International lightweight title, as well as bragging rights, is up for grabs, with the winner set to challenger for the full world title in the future – but Coyle insists it is ‘just business‘ between the two.
In the co-feature, Brian Rose will be looking for revenge against Carson Jones, who stopped him back in February and claims his daughter punches harder then Rose.
Dillian Whyte, Ricky Burns and Martin J Ward all feature on the bill.

Sunday August 2
2.00am BT Sport 1 (LIVE)
DANNY GARCIA makes his debut at welterweight having won several world titles at 140lbs. He faces former two-weight world champion Paul Malignaggi at the Barclays Center in Brooklyn, New York. Garcia remains unconcerned about what challenges Malignaggi may bring, while Paul maintains he is fully prepared for Garcia despite a 15-month hiatus.
Daniel Jacobs defends his WBA middleweight world title against the slick Sergio Mora in the co-featured bout of the card. Although Mora has lost three times before, he is yet to be stopped but Jacobs hopes to be the first man to do so.

Monday August 3
1.00am BoxNation (LIVE)
A RARE chance to start the working week with an early Monday morning dose of live boxing as Juan Carlos Payano defends his WBA ‘Super’ world bantamweight title against fellow unbeaten former Olympian Rau’shee Warren. Payano represented the Dominican Republic twice at the Olympics while Warren fought at three different Games for the USA, although neither was able to medal. Both have carved out impressive CVs as professionals, with Payano picking up the belt in his last fight – a technical decision over Anselmo Moreno last September.