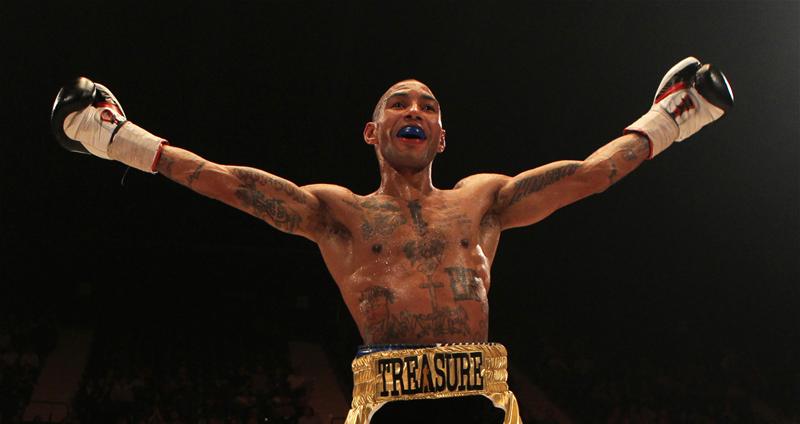 AFTER the euphoria of the announcement that Floyd Mayweather versus Manny Pacquiao had finally been confirmed for May 2 in Las Vegas, comes the clamour to be part of the supporting cast. British interest could materialise in the shape of Mayweather team member and Kilburn, north west London native Ashley Theophane. The light-welterweight begins his latest stint at the Mayweather gym on Monday and, after four wins on the bounce, is hoping to be out again soon.
“I start on Monday, as they’ve been re-doing the gym,” he revealed. “I’ve been told two dates, a show on the week of Floyd’s and that one [May 2], so it’ll be one of the two; we’ll know in the next two weeks.”
Since losing on a split decision to ex-WBA Interim king Pablo Cesar Cano in 2013, Theophane has returned to form. He is confident his team can secure for him a world title opportunity, as they have with some of their other clients.
“Everyone around my division is occupied,” he lamented. “I love John Molina and Adrien Broner, they are great fighters, I’d have a great fight with either, Lamont Peterson too, I’ve already fought Danny Garcia. I wanna fight against the big names so I need to get a respectable win, so my team are working on a name then the very big names. You can see what they’ve done with Ishe Smith, Mickey Bey and now Badou Jack. I’ve won my last four fights, I’ve been doing my job and looking better and better. I want a big fight at 140lbs, that’s why my last five fights I’ve been no higher than 143.”

The digital version of the magazine is available NOW on the Boxing News app, on Google Play, iTunes or from www.pocketmags.com.