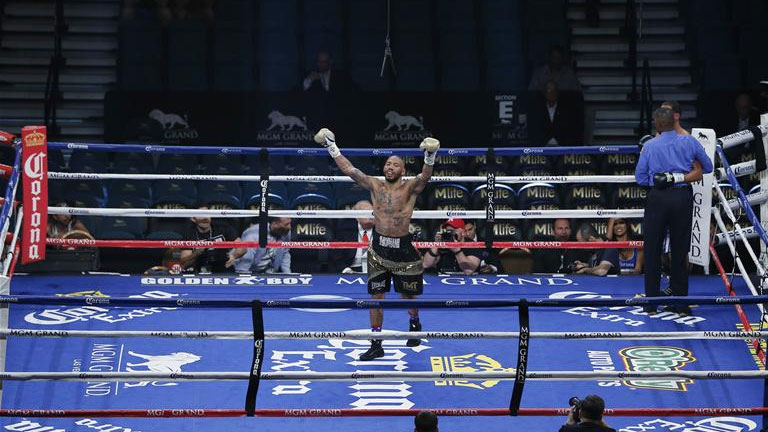 Theophane credits Floyd Mayweather with helping him to achieve his dreams

ASHLEY THEOPHANE sat inside the MGM Grand’s media centre with a smile on his face. This is a man who has been chasing his dreams for a long time, and as of three years ago, the Londoner has been a member of Floyd Mayweather’s ‘Money Team’, training with the welterweight king at his Las Vegas gym, and fighting under his promotional banner. On Saturday afternoon – as early as 1pm – he fights on the undercard of Mayweather’s fight against Andre Berto knowing that a win could lead to a WBA title fight with Adrien Broner.

“It would mean everything to me,” he told Boxing News about the potential world title shot. “I turned professional in 2003 at York Hall. Many British boxing reporters, promoters, coaches never thought I would get to British champion level and I surpassed that. I was British champion, I was world number four, and I’ve fought some really good fighters. I’m already signed with Floyd Mayweather, and he’s backing me. It shows that you can achieve dreams against the odds.”

The light-welterweight takes on Steve Upshaw Chambers over 10 rounds and insists the early start will not be a problem.

“I think it will be okay because I’ve been training at the gym at 12, at one o’clock,” he reasoned. “To me. It’s like sparring. There will be no one there [in the crowd at that time]. There will be a few Brits there. I’m going to go out there and get the win and then it’s onto the next one, the big one. I would the fight with ‘AB’ [Adrien Broner]. It will be great fight. It will be ‘The Money Team’ versus ‘Band Camp.’ It will be a big fight here at the MGM Grand.”

Theophane – who was Floyd’s first sparring partner of his current training camp – believes his time working alongside Mayweather has been invaluable.

“It’s a huge thing,” he said. “When you watch him work so hard. He earned $300m for his last fight and then two months later he’s back in the gym training hard again. He’s called ‘Money’ Mayweather but it means more than the money to him. You see him work so hard and it rubs off on you. I’m one of the older guys in the gym, one of the older guys in the team and I get to spar with all the young guys so it’s nice. I’m British, out in America, and a lot of the American boxers look up to me and say ‘One day I want to be where you are’. I’m always like, ‘You want to be further than where I am’. It shows that dreams can come true and with hard work, anything can happen.”

Mayweather’s bout with Berto has been famously advertised as his last and will take his record to 49-0 – the same as heavyweight legend, Rocky Marciano. Theophane revealed that Mayweather has been talking about retirement since last year, but the British fighter hopes he hangs around for one more contest to break Rocky’s record.

“I hope he has one more and he finishes on the 50-0,” said Theophane. “But since last year he used to come in the gym and he was like, ‘I don’t want to be doing this’. His attitude changes. He doesn’t need to box. Most boxers need to box and that’s why you see the old boxers coming out of retirement but he doesn’t need to, he’s doing this because he wants to finish his career. It wouldn’t surprise me if it is his last fight but personally I hope that he has one more fight. But all the signs are this is his last one.”