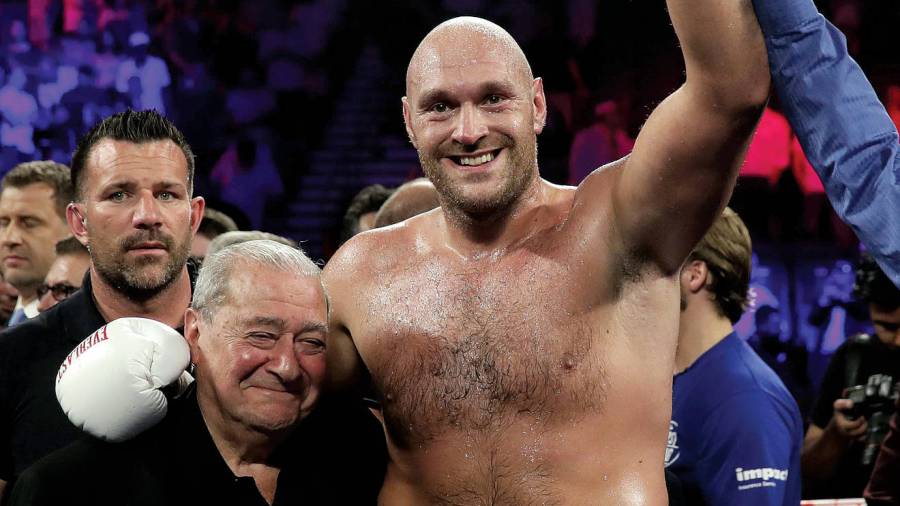 Bob Arum does not believe Tyson Fury will stay retired for long nor have any problems re-entering the USA. By Declan Warrington

BOB ARUM has predicted Tyson Fury will fight again before the end of the year – and doesn’t expect him to have a problem travelling to America if he does. Fury insisted, after stopping Dillian Whyte in six rounds at Wembley Stadium on April 23, that he had retired from professional boxing and would only consider lucrative exhibitions against mixed martial artists or in sports entertainment.

He repeatedly announced he had retired in the two-and-a-half years that separated his victories over Wladimir Klitschko and Sefer Seferi, however, and had since continued to improve.

At 33, Fury is unquestionably at his peak and therefore capable of continuing to build the sort of legacy that a fighter with such an awareness of boxing’s rich history desires. He also has two fights remaining on his rewarding contract with Arum’s Top Rank and, in the context of his mental health and previous struggles with depression, by his own admission is healthier when active.

That his relationship with Daniel Kinahan, alleged to be the leader of a notorious drugs cartel, has been placed under greater scrutiny than ever regardless might prove a deterrent. Only last week the retired Matthew Macklin, in his role with Sky Sports, was denied entry to a flight to Las Vegas – where he had planned on attending Óscar Valdez-Shakur Stevenson – amid his links with Kinahan, which he insists were severed in 2017. The US authorities’ offer of a $5m reward for further information that could lead to the exiled Irishman Kinahan’s arrest and then being brought to trial to answer serious criminal allegations triggered that increased scrutiny, but for all that Fury’s association with him is considerably more recent, Arum – who has since said he will refuse to work with Kinahan – is unconcerned that the heavyweight could suffer in the same way.

“Matthew [Macklin] worked for Kinahan,” Arum told Boxing News. “Tyson never did. Tyson, at worst, was a friend of his. A lot of us swallowed the Kinahan line that he was using boxing to clean up his image and he wasn’t involved in the bad things, and that apparently wasn’t the case.

“I don’t think [he’d encounter any red tape in the event of attempting to fly to America]. I’m not the government, but I don’t think so. I spoke to him after the [Whyte] fight, and he told me that he’s coming over with the family to Las Vegas – he has a really nice home here – and he’s going to spend about a month here.

“I believe he believes he’s retired, but I’ve seen this happen so many times before. A fighter, after a big fight, says ‘I’m retired’, and then a month or two later has second thoughts and comes back.

“The [Oleksandr] Usyk fight with [Anthony] Joshua is apparently going to take place at the end of July, and I will bet anything that his blood will start boiling and he’ll want to fight the winner.”

Asked if Fury against either Usyk or Joshua could therefore even happen later this year, Arum responded:  “Definitely.  After that fight, then he’d probably really retire. If Joshua wins, [Eddie] Hearn wants to do that fight, and if Usyk wins – Usyk’s one of my close friends – I know he’ll do the fight. [Fury had told me he wants that fight] – that’s why this comes as a surprise.

“He’s happier when he’s boxing and in the gym. But if he decides to retire, either now or after another fight, he’s content and can keep himself occupied and make a lot of money as a performer, whether it’s with the WWE or something like that. I think the depression is behind him.

“Certainly $50-60m between the two fights [on his promotional contract would be left behind if he never fought again]. It could be more.”

Another of Arum’s leading fighters, Stevenson, produced a masterclass on Saturday to earn a unanimous decision over Valdez at Las Vegas’ MGM Grand, shortly after Katie Taylor and Amanda Serrano thrilled a significant audience as Taylor fought to a split decision victory at Madison Square Garden in New York.

The fight billed as the biggest in women’s boxing history delivered to such an extent that discussions have already turned to a rematch, but the 90-year-old Arum is still to be convinced of its worth.

“We’ll certainly see more women’s boxing,” he said. “That fight drew very well – I don’t know whether it was the Irish people following Katie Taylor – but [women’s boxing] is not a draw, particularly, in the United States. It’s just not.

“It’s entertaining. We have Mikaela Mayer, a terrific young lady and very good athlete, but it seems it hasn’t particularly caught on in the United States. In the UK it’s a little different.”