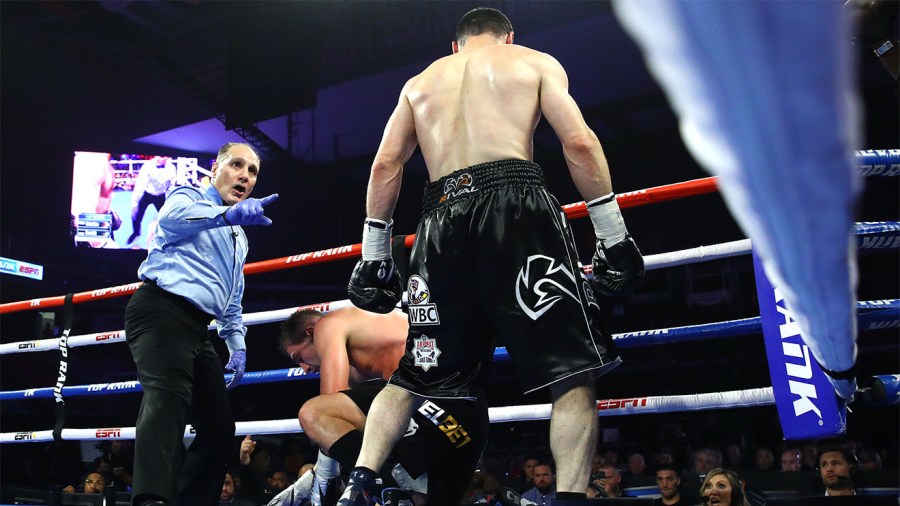 A PROXY war broke out at the Liacouras Center when Russia’s Artur Beterbiev faced Ukraine’s Oleksandr Gvozdyk in a light-heavyweight unification match. The deadly conflict at the Ukraine-Russia border has raged since February 2014, but instead of bombs and bullets, Beterbiev and Gvozdyk settled their differences in a boxing ring.

Battle lines were drawn during the singing of the Russian national anthem, which was partially drowned out by the racket emanating from the Ukrainian fans. They outnumbered Beterbiev’s Russian supporters by a substantial margin and roared whenever Gvozdyk tagged Beterbiev with a punch or looked like he might.

At the end of the evening, however, it was Beterbiev’s smaller band of followers that were celebrating. It wasn’t easy but in the end their man prevailed, knocking down Gvozdyk three times in round 10 to end the fight and add the Ukrainian’s WBC belt to the IBF one he already held.

It was vaguely reminiscent of the second Joe Louis-Max Schmeling fight, on a far smaller scale, of course, but there’s no denying the international dynamic. Oleksandr and Artur are boxers from European countries hostile to one another, fighting in the United States.

When asked, prior to the fight, about the confrontation in which their countries are embroiled, both boxers were circumspect.

“Any war is bad for people, but I really don’t want to talk about it,” said the 34-year-old Beterbiev, who relocated to Montreal six years ago. “It’s far from me in Canada.”

“It doesn’t bother me,” Gvozdyk said. “I’m just an athlete. I don’t want to make any parallels to the fight. I am living in California, and he is living in Montreal. I just don’t know anything about it.”

Even if you take Beterbiev and Gvozdyk’s words at face value, it would be difficult to convince the passionate fans of Ukrainian and Russian heritage in attendance at the Liacouras Center that there was nothing more at stake than a boxing match.

The fight was a study in contrasts, not only in the combatants’ fighting styles, but also their personas. Beterbiev could pass for Khal Drago’s younger brother, muscle on top of muscle, a fierce beard and a menacing stare. The 32-year-old Gvozdyk is taller, quicker, more athletic and a better technical boxer, the ice to Beterbiev’s fire.

Gvozdyk’s plan was to use his legs to stay out of trouble, occasionally darting in for a quick strike and then escaping out the back door before Beterbiev could retaliate. This was sound strategy in that it would be suicide to do otherwise. Mixing it up with a man called the “Beast” is never a good idea.

The flaw in Gvozdyk’s plan was twofold. It didn’t take into account the unforgiving nature of Beterbiev’s punches, or that the “Nail’s” offerings would not be sufficient to hold him off indefinitely.

The only action worthy of note in the first round was the knockdown that wasn’t a knockdown. There was some sloppy jockeying on the inside that resulted in Beterbiev pushing Gvozdyk to floor.

When referee Gary Rosato called it a knockdown, voices of discontent rose from every quarter, including the media section. At the end of the round, Gvozdyk’s trainer, Teddy Atlas, jumped into the ring and started yelling, presumably at the referee.

Greg Sirb, executive director of the Pennsylvania State Athletic Commission, looked at the replay between rounds and correctly ruled “no knockdown.” The judges reached for their pencils.

For most of the second round, Gvozdyk moved well, avoided punishment and peppered Beterbiev with punches designed to score and irritate rather than hurt. Late in the round, Beterbiev drove a right into body that forced Gvozdyk to grab and hold, but he recovered quickly and landed a snappy combination shortly before the bell.

In almost every round, regardless of whether he won or lost it, Beterbiev landed at least one heavy shot, the accumulation of which eventually led to Gvozdyk’s downfall.

In the third round, Gvozdyk stood his ground and outpunched Beterbiev during a blistering exchange. Beterbiev reset and charged again, but Gvozdyk ducked low and the punches whizzed over his head.

The fourth was another good round for Gvozdyk. He caught Beterbiev malingering on the ropes, stepped forward and connected. Then he pumped out a trio of stiff jabs, followed by a good body shot.

Again Beterbiev landed a powerful blow as the round drew to a close, slamming a left hook into the side of Gvozdyk’s head. It wasn’t enough to win the round, but it nudged his eventual victim closer to the abyss.

The fifth was a productive round for Beterbiev. When he jabbed, which wasn’t as often as he should, it pierced Gvozdyk’s guard and landed smack-dab in the middle of his face. Toward the end of the round, Beterbiev landed two clubbing rights that forced Gvozdyk to retreat.

The seventh was fought on fairly even terms. Early in the round Gvozdyk popped a sharp left into Beterbiev’s face, only to absorb a right uppercut to the body in return. As in most rounds, Gvozdyk was the busier fighter but his punches lacked the power to stall Beterbiev’s persistent advance.

Gvozdyk boxed intelligently and landed right hands to the head on a fairly consistent basis in the eighth. Beterbiev took them well, and when they traded rights late in the round, it was the Russian slugger’s blow that did most damage and foreshadowed what to come in the ninth.

Beterbiev knew Gvozdyk didn’t have much left and shifted his assault into warp drive in the ninth. Potent combinations found their target on a regular basis, and the weary Gvozdyk grabbed and held at every opportunity. When Beterbiev connected with a right uppercut as the round drew to a close, Gvozdyk was badly hurt and perilously close to going down.

By then, everybody knew what was going to happen; even those who didn’t want to believe it. Gvozdyk probably knew, too, but there was no way he would quit on his stool. He’d answer the bell, determined to do the best he could.

Beterbiev wasted no time in round 10. He landed a short left and three right hands to the head. Gvozdyk sank to one knee in obvious distress, regained his feet, only to be knocked down again by a left hook soon after action resumed.

Gvozdyk rose again on legs of straw. He looked confused, like he’d lost something but couldn’t remember what. Beterbiev closed, threw an arcing left hook that missed when Gvozdyk bent over at the waist. Before he could straighten up, Beterbiev hammered him down to the ring floor for a third time with two compact rights to the side of the head.

Referee Rosato waved the fight off at the 2-03 mark, lifted Gvozdyk to his feet and walked him to back to his corner. At the time of the stoppage Gvozdyk led 87-84 and 86-85 on two cards, while the third had Beterbiev ahead 87-83.

By the time Beterbiev was interviewed after the fight, the Beast was gone, replaced by an ordinary man with an extraordinary punch.

“I tried to just box and the knockout comes. I don’t focus on a knockout,” Beterbiev said. “One knockdown, second knockdown, third knockdown. I just continued until the referee stopped it. It’s my most important fight. I had big work to prepare for this fight.”

“I thought it was a terrific fight. Gvozdyk was outboxing him early and the ‘Beast’ just wore him down and finally took him out,” said Top Rank chairman Bob Arum who promoted the card in association with Peltz Boxing. “He’s really one of the strongest light-heavyweights I’ve ever seen. He has tremendous energy and takes a great punch and stays in there and finally wears his opponent out.”

Next for Beterbiev is a mandatory defence of the IBF title against China’s Meng Fanlong. Providing he wins there are plenty of attractive options waiting.

A match with WBA titleholder Dmitry Bivol would further unify the light-heavyweight division.

“Of course, there is a desire to fight [Beterbiev],” said Bivol. “The fact that he now has two belts will intrigue me.”

A fight with the winner of the November 2 Canelo Alvarez-Sergey Kovalev showdown would be an even bigger attraction in the United States than either the Bivol or Meng fights.

About an hour after the fight, Gvozdyk complained of a pain in the back of his head and was taken to nearby Temple Hospital. No brain bleed was found and he was released after spending Friday and Saturday in hospital.

The 38-year-old Puerto Rican from Queens, New York, might very well have beaten Abdukakhorov four or five years ago, but he didn’t have the energy to keep pace with his 26-year-old Uzbek opponent.

Collazo was effective when he closed the gap and dug to the body with both hands, and there were a few occasions when Abdukakhorov looked decidedly uncomfortable. On the outside, however, Abdukakhorov was in control, connecting frequently with an assortment of punches as Collazo trudged after him.

Collazo suffered a cut over his left eye in the seconds round, but rallied in the third to land several hard left hooks, one of which knocked Abdukakhorov off balance.

Any chance of a victory vanished when Collazo injured his left biceps in the fifth, the same biceps that required surgery two years ago.

Although his nickname is the “Punisher”, Abdukakhorov is not a particularly hard hitter, which is probably the reason Collazo was still plugging away in round 10 when an accidental clash of heads sent him to the canvas, grimacing in pain, blood dripping from a deeper cut over his right eye.

The ringside doctor told referee Benjy Esteves that Collazo was in no condition to continue, and the fight was stopped at 2-03 of the 10th round. All scorecards were in Abdukakhorov’s favour by tallies of 99-91, 97-93 and 98-92.

“I am the IBF No. 1 contender and I would like to fight for the title fight next,” Abdukakhorov said. “I wanted to fight Errol Spence Jr., but unfortunately he got in a car accident. I wish him a speedy recovery, and if he’s ready to fight soon, I would like to fight him. If he has to vacate the title, then I will fight whoever they put in front of me.”

The Verdict Beterbiev makes himself a major player in a talent-packed 175lb division.