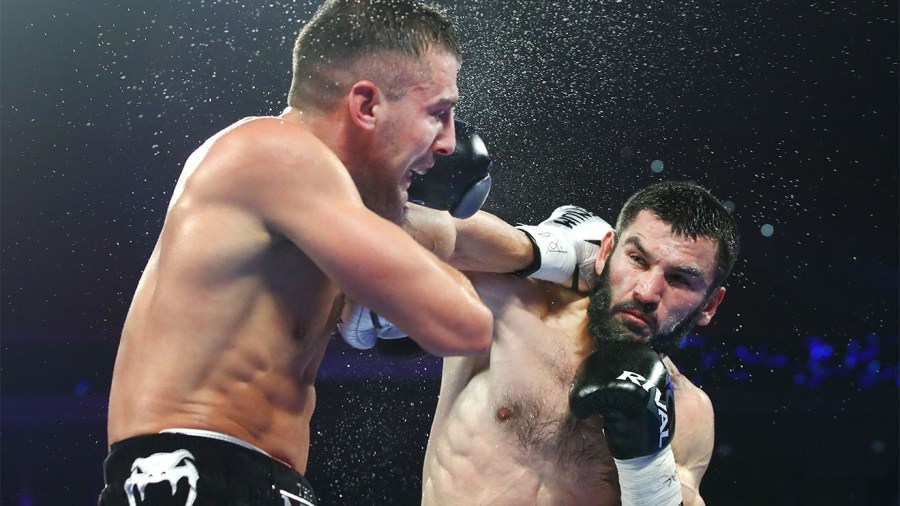 Artur Beterbiev set to compete on home soil for the first time as a pro, writes Matt Bozeat

ONE of the world’s top pound-for-pound punchers returns to Russia this Saturday (March 20) when Artur Beterbiev defends his WBC and IBF light-heavyweight titles against German southpaw Adam Deines inside Moscow’s Khodynka Ice Palace (Patriot Promotion Company). The fight marks the first time Beterbiev has fought in his home country as a pro, and according to the bookmakers, Deines won’t spoil the occasion. For some, Beterbiev is as much as a 1/33 favourite which, though not uncommon in this day and age, is frankly ridiculous in a world title fight.

The knockout specialist has 15 straight inside-the-distance wins – including four in world-title fights – and as an amateur, he boxed in the 2008 and 2012 Olympics, twice won the European Championships and was also crowned World champion. That is a CV that swamps that of Deines, a 30-year-old from Magdeburg who was born in Russia.

The underdog has a 19-1-1 (10) record, the sole defeat being inflicted by Fanlong Meng (14-0) in Macau in June 2019. Meng won unanimously after being decked in the eighth and was set to challenge Beterbiev last March, before the coronavirus pandemic meant the fight was pushed back to October. It was scrapped again after Meng could not get a visa to enter Russia, so Deines stepped in. However, Beterbiev had to pull out with a rib injury, and the fight was rearranged for January, but then the champion tested positive for COVID-19.

By the time the opening bell goes, the 36-year-old Beterbiev will have been out of the ring for 17 months, since he broke down Oleksandr Gvozdyk (17-0) in 10 rounds to add the WBC belt to his IBF title. After nine rounds, Beterbiev was up on one scorecard and behind on the other two, but the fight had turned his way. The turning point came in the sixth. The best punch Gvozdyk landed throughout the fight – a clean right hand to Beterbiev’s jaw – did not dent the Russian and Gvozdyk ended the round under fire after being hurt by body punches.

There was a bizarre moment in the ninth when Gvozdyk stepped back and sought to take a breather after receiving a hard jab to the body. Beterbiev stood and watched and once the Montreal-based banger sensed what had happened and realised the fight was leaving his opponent, he started to put his punches together. After three knockdowns in the 10th, it was all over.

Deines has yet to prove he can compete at the highest level. He can consider himself fortunate – until the opening bell at least – to get this shot. The left-hander, who has had a pair of straightforward stoppage wins over opponents with a combined record of 11-12 since the Meng reverse, will be the first southpaw Beterbiev has faced for around six years and, who knows, perhaps he is in the right place at the right time.

Beterbiev will be rusty and has flaws, as Callum Johnson (17-0) proved in October 2018. Down in the first, Johnson had Beterbiev on the floor in the second. Seconds earlier, Johnson had been shaken up and when Beterbiev went looking for the finish, the Brit kept his defence tight and beat him to the punch with a short left hook that put the Russian over. Johnson could not find another punch like it and was counted out after running onto a fourth-round right hand.

Johnson had his successes when he got close to Beterbiev and landed short punches, while Gvozdyk won rounds against him by beating him to the punch and moving. Deines looks to have good feet and puts his shots together well, but the challenger is stepping up several levels this weekend. The best win on his record is a split verdict over 2012 Olympian Stefan Haertel, who went into their fight in March 2018 with a 15-0 record. The fight was desperately close and it was the work rate of Deines that earned him the decision.

Deines won rounds by getting close and letting his hands go, and maybe he can do to Beterbiev what Johnson did to him. But I’m not sure that the German is as robust as Johnson or that his punches are as short and carry as much weight. Even allowing for Beterbiev’s age and inactivity, it is hard to envisage anything other than a decisive stoppage win for the champion.

(Premier Sports 2 and BoxNation televise in the UK, while ESPN broadcast in the US.)

The Verdict It looks like an extremely tough ask for Deines to upset Beterbiev.