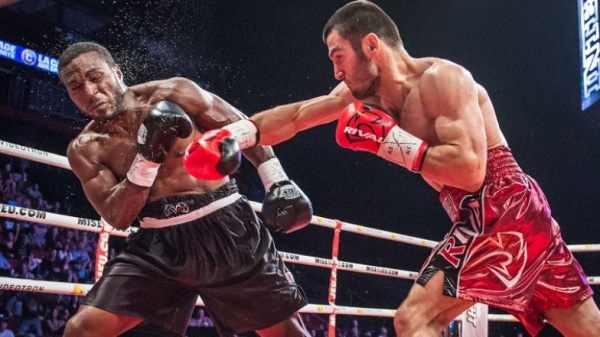 Beterbiev can excel at the top level with minimal professional experience like Lomachenko and Magri before him, writes Daniel Herbert

THE big result from the weekend was Artur Beterbiev wiping out former world light-heavyweight champion Tavoris Cloud in just two rounds in Montreal. That the Russian won was not a surprise, what shocked was the one-sided manner as Cloud went down four times.

Beterbiev won the World Amateur Championships in 2009, and possesses the strength and power that translate well into the pro game, rather than the peck-and-poke style used by so many top amateurs of recent years. Still, he’d had only five paid fights going into the Cloud match and many felt he’d bitten off more than he could chew.

It was a statement of intent, not to mention supreme confidence, that his Canadian promoters GYM should match him so tough, so early – even if Cloud had lost his last two contests, he’d been stopped only once and had mixed in good company for years.

So this was truly a case of “accelerated development”, explained only in part by Beterbiev’s advanced age of 29. GYM knew what their man could do, and invested in a “name” opponent to test his mettle. He came through with flying colours, in an example to those boxing handlers who put preserving a boxer’s unbeaten record above all other considerations.

An even more extreme case of accelerated development is Vasyl Lomachenko, the former World and Olympic champion who boxed for a world pro title in only his second paid outing (and won one in his third). Beterbiev isn’t quite on the level of the brilliant Ukrainian, but one can see Artur contesting a world title in the next 12 months, after a few more seasoning fights.

Going back a few decades, another such case was Charlie Magri. The East Ender was a world class amateur, winning medals at the 1974 European Under-21 Championships and the following year’s European Seniors (although he shockingly flopped at the 1976 Montreal Olympics).

He turned pro in late 1977 as the brightest prospect in British boxing, a little dynamo with KO power in either hand. He won his debut on October 25, beating Neil McLaughlin, and overcame Bryn Griffiths on November 15 before a seven-round win over Dave Smith on December 6 made him British flyweight champion, just 42 days into his pro career!

True, at that time Britain had few professional flyweights and even fewer of anything more than prelim class. But McLaughlin, Griffiths and Smith were all former amateur internationals and no mugs, even if they were always destined to be overshadowed by Magri.

Becoming British champion in record time got Magri’s career off to a cracking start, earning him plenty of publicity – this in an era when the national newspapers all had regular boxing correspondents. Although Charlie suffered a couple of setbacks along the way, he eventually achieved his dream of becoming world champion, holding the WBC title for six months in 1983. So accelerated development certainly didn’t do his career any harm.