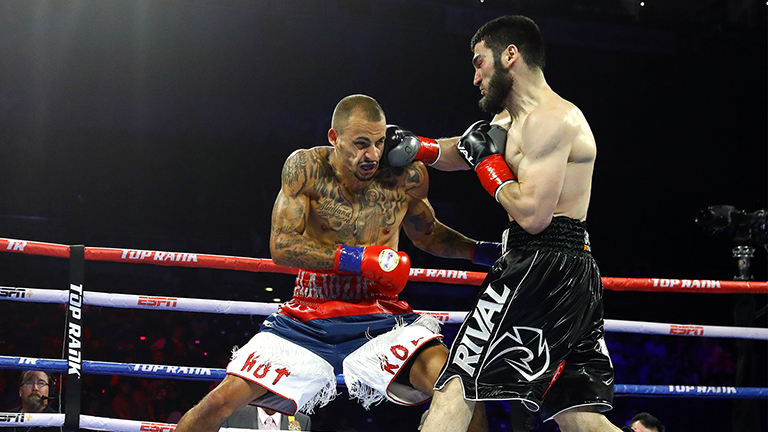 ARTUR BETERBIEV defended his IBF light-heavyweight title when Radivoje Kalajdzic was halted on his feet 13 seconds into the fifth round of their clash at the Stockton Arena in California on Saturday (May 4).

“I worked very hard for this fight. I went 100 percent in the gym. Maybe one day I’ll show my boxing skills,” Beterbiev said. “I want unification fights. It doesn’t matter who it is. I am happy to be working with Top Rank and ESPN.”

Any rival champion would be a richly appealing fight, they are all top quality. Beterbiev versus either Sergey Kovalev, the WBO champion, Oleksandr Gvodzyk, the WBC, or Dmitry Bivol, the WBA boss, would be unmissable.

On the same bill, which drew 10,105 supporters, IBF super-flyweight titlist Jerwin Ancajas stopped Ryuichi Funai at the start of the seventh round. “Funai has a champion’s heart. He took my best punches. I have nothing but respect for him,” Ancajas [pictured below] said.

“This was the best training camp I had in a very long time. We changed some things in training and we hired a nutritionist, which helped me make the weight a lot easier. That showed in the ring tonight. I felt great at 115 pounds, and I will be able to make that weight for a long time.”