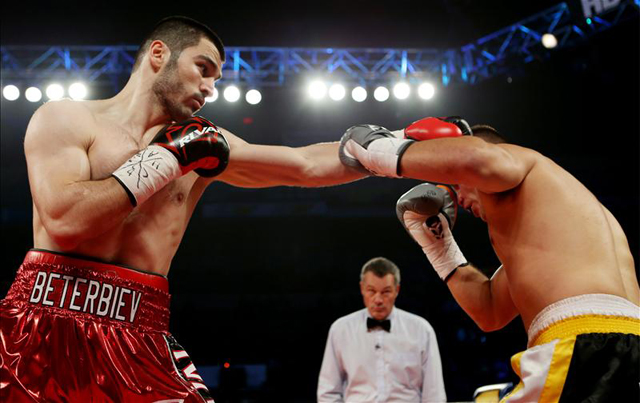 ARTUR BETERBIEV, a rising professional prospect, has declared that he won’t attempt to qualify for the 2016 Olympic Games.

AIBA, the governing body for the Olympic sport, has made professional boxers eligible to enter the last qualification event, that which place in Vargas, Venezuela from July 3-8. Beterbiev has already competed in two Olympics, at light-heavy in 2008 and heavyweight in 2012. He lost to Ukraine’s Oleksandr Usyk in a memorable battle at London 2012.

Given that Evgeny Tishchenko has already qualified for Rio 2016 at 91kgs, if Beterbiev had wanted to pursue a third Olympic Games he would have had to make 81kgs for the tournament. He will however focus on working his way towards a professional world title.

“After analyzing all situations, we came to the conclusion that the current situation was not favorable,” GYM president Yvon Michel explained.  “The short-term goal for Artur Beterbiev is to become world champion in the pro ranks. He will be back in the ring in September.”

“Regardless of my boxer’s objectives, ” Beterbiev’s head trainer Marc Ramsey added, “I’m behind him 100-percent.  However, the main goal remains the conquest of a World title.”