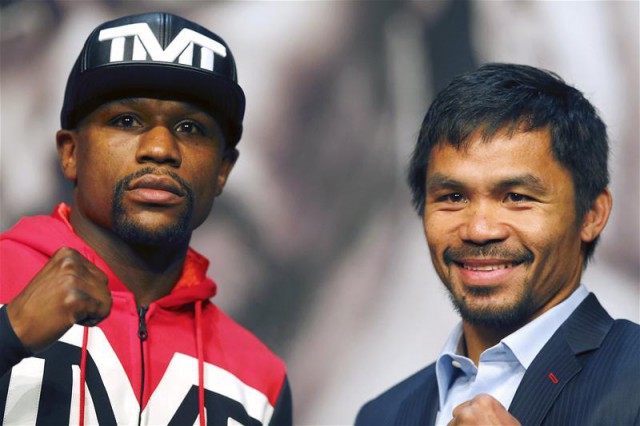 “IT’S time to fight now,” Floyd Mayweather said as the final press conference for his showdown with Manny Pacquiao came to a close. The declaration of intent was welcome after a polite build-up that belies the surrounding  hysteria.

With the eyes of the world locked on our noble sport perhaps we should be grateful that there has been nothing but reverence displayed in recent weeks. It cannot be denied, however, that a bit of good old fashioned ‘needle’ would prick the interest even further. After five years of infamous contract wrangling and finger pointing it appears the rivals have grown to – dare I say it – quite like each other.

Pacquiao – wearing a suit and a smile – took to the stage and spent a lot of time thanking God, before turning to Floyd and voicing a hope that he could hook up with his new buddy after the fight and spread the good word of the Lord.

“I hope I can have a conversation with Floyd after the fight about my faith in God and how we can inspire the children who are supporting us,” he said.

Mayweather, also cheerful, followed suit and opened his speech by thanking God. It’s becoming harder and harder to remember the mischievous fighter of a few years ago who used to turn up to press conferences with caged chickens as props, and enough targeted tomfoolery to leave his opponents raging with disbelief.

“I feel good, I feel strong,” he said as today’s boasting reached its peak.

The American did manage to lose his smile for the contracted stare-down, but the image of little Manny grinning back at him certainly tested his scowl.

Make no mistake, though. Despite the rather subdued pre-fight posturing the sense of occasion hurtling through the intensely conditioned air at the MGM Grand – and spilling out all over Las Vegas – is intoxicating. Images of the two fighters are everywhere you turn, clips of their training routines included in every news bulletin, and predictions of Saturday night’s outcome passing everyone’s frothing lips.

Everyone has an opinion, and everyone cares. Boxing hasn’t had this amount of attention for decades which is why it is vital that it delivers on the night. And despite the week’s pleasantries, be sure that both Mayweather and Pacquiao are well aware of that.

This just might be the calm before the perfect storm.

ALL YOU NEED TO KNOW ABOUT THE FIGHT OF THE CENTURY