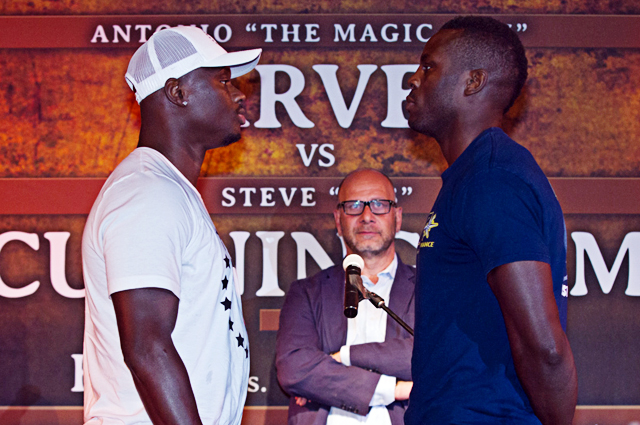 FORMER light-heavyweight world champion Antonio Tarver hopes to accomplish the feats of the on-screen character he played in the 2006 film Rocky Balboa and win the world heavyweight title.

Tarver played the fictional undisputed heavyweight champion of the world Mason Dixon across from Sylvester Stallone.

Speaking ahead of his heavyweight clash with Steve Cunningham on Friday night [August 14] at the Prudential Center in Newark, New Jersey, Tarver spoke of his plans to rule the banner division at the age of 46.

“I was a big light heavyweight but I feel perfect at heavyweight. When I look back at some of my old fights, I was really just a shell of myself. Now I’m healthy and strong and ready to get to the top.

“Every fight is do or die for me. I’ve come too far to start over. I’m on a destiny trip right now. I’m racing towards that heavyweight world championship.”

Former world cruiserweight champion Cunningham, 39, has had mixed results since moving up to heavyweight, but believes he can set himself on track with a win over Tarver.

“Tarver is a five-time champion, legend, Hall of Famer, but that’s all going out the window August 14. He’s just another guy I have to beat,” he said.

“My record doesn’t reflect what I’ve done in the ring, but I take it on the chin and keep going forward like I do in the ring.

“People have seen the work ethic from me. They’ve seen what I’ve gone through in the ring. They saw the close decision losses. I’ve always had faith in myself and I still do.

“A guy like Tarver, sometimes you have to talk yourself up to get to where you want to go and that’s who he is. He’s a good talker. That will carry on into his next career. But he’s dealing with a guy who grew up dealing with trash talking. I dealt with trash talkers in every language. The talk is for him. He sold this fight, great. But now I’m getting in there to fight.”