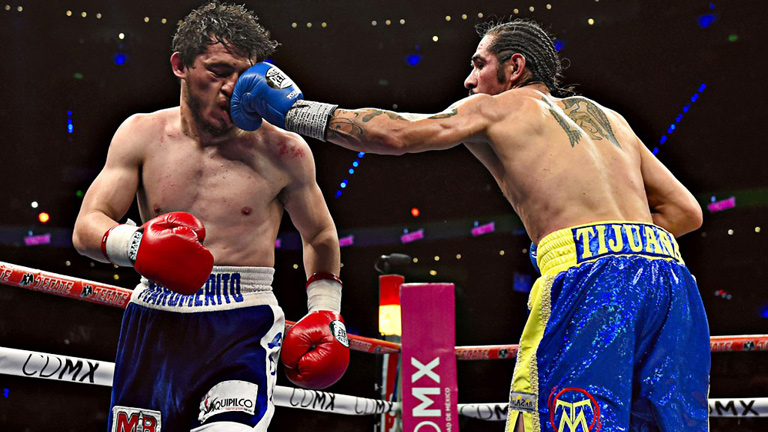 Antonio Margarito rises from a knockdown to win on points

ANTONIO MARGARITO made an ill-advised, yet successful, return to the ring on Saturday night [March 5] in front of 10,000 adoring fans in Mexico City.

The war-torn Tijuana native rose from a knockdown in the sixth to outpoint the limited Jorge Paez Jnr over 10 rounds. Both men weighed 154lbs.

At 37, it was Margarito’s first fight in almost five years. In 2010 Manny Pacquiao warped his features, so much so that the socket around his right eye needed reconstructing. Miguel Cotto then gained revenge over him a year later, pummeling him to a ninth-round retirement.

The villainous, intimidating Margarito of old has been replaced with a labouring imposter who struggled to beat a natural welterweight who had lost three of his last six.

With dulled reflexes and his right eye almost falling out of the socket, Margarito pawed with his jab in the early goings as the fight quickly became more competitive than it should have been.

A right-left combo dropped the former welterweight world champion in the sixth, though he rose to rally back. He was forced to dig deep to eke out the win which, while massively flawed, was at least entertaining.

Antonio should have been banned from boxing for good after wearing loaded gloves against Shane Mosley in 2009, and hopefully his struggle with Paez will persuade him – and the relevant authorities – to end this farcical comeback.