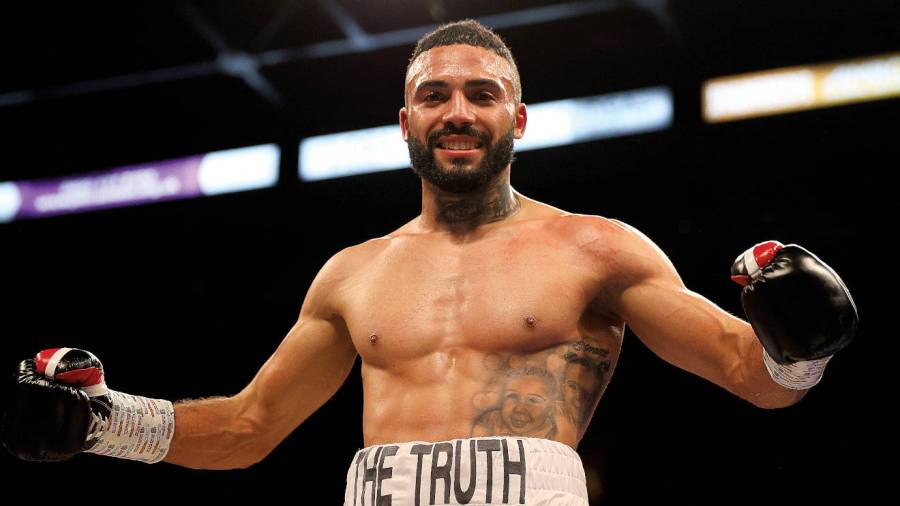 Dave Allen comes back on the same bill as Anthony Tomlinson in Sheffield on Friday night. Allen says he's ultimately looking for a showdown with Alen Babic

THE Fightzone cameras return to Sheffield on Friday night (August 27) for a show at the Ponds Forge Arena that’s topped by local welterweight Anthony “The Truth” Tomlinson and also features the return of popular heavyweight Dave Allen. Tomlinson meets Mexico’s Dante Jardón (33-6) over 10 rounds, while Allen eases back after 18 months out against Andrea Pesce (7-13-3) over six. Fight Academy promote.

Roger Sampson, the ex-pro who trains Tomlinson, describes Jardón as “a big step up.” The 40-fight record (one no contest) shows wins over belt-holders Juan Carlos Salgado and Gamaliel Diaz, but those career-best wins were at 130lbs and several years ago. Jardón has boxed only five times since August, 2016, winning three, including a split decision over Chester Parada Torales (4-1). The sequence also includes a five-round knockout defeat to Francisco Hernandez Rojo (18-2) and a no contest against Omar Alejandro Aguilar (17-0) last June. Jardón was stopped in the opening round, but with covid restrictions still in place, the result was rubbed from the record books.

If Jardón is vulnerable, he could be in trouble because Tomlinson can punch, with “world-class power.” He had five straight stoppages – including a career-best win over Stewart Burt (13-1-1) – before going the full six against Genadij Krajevskij (0-12) in May. The 30-year-old had been lined up to fight James Moorcroft (13-1) in a good-looking fight, but that fell through and Tomlinson got a workout against the Liverpool-based Lithuanian. That was his first fight with Sampson back in his corner. Sampson trained Tomlinson during his 15-bout amateur career before he turned pro with Stefy Bull in 2017. The 13-0 (7) Tomlinson, who didn’t walk into a gym until he was 22 years old, is already a success story.

“I didn’t have a father figure growing up,” he said. “I got kicked out of school, was homeless and in and out of prison. I’m showing people that if you put your mind to it and believe in yourself, you can achieve things.”

Though he’s not always the most textbook of boxers, Tomlinson has plenty going for him. He is loose around the shoulders, comfortable in the ring – and there’s pop in his punches.

“He throws them from weird angles,” said Sampson, who was a 9-3 pro himself, “and they don’t see them coming until it’s too late.”

He should hit too hard for Jardón, and we go for Tomlinson to win around the sixth round.

Also in Sheffield, Dave Allen, 18-5-2 (15) relaunches his career against Andrea Pesce, a 36-year-old who’s lost seven of his last eight and stands only 5ft 9ins tall (according to BoxRec). Last time out, Pesce lasted into the eighth with gatekeeper Andriy Rudenko (33-5) and Allen, last seen knocking out Welshman Dorian Darch (12-11-1) in three rounds in February, 2020, hopes the Italian can give him some rounds. “I’ve had loads of offers,” said the 29-year-old from Conisborough, Yorkshire. “I think people see me as a big name who’s on the slide. That’s fine by me.

“The people who say that don’t know I’ve been training harder than I’ve ever trained before, but I still won’t know how much is left until I get in there.”

Allen, who showed world-class resilience in losses to Dillian Whyte and Luis Ortiz and was perhaps unlucky not to get the decision over Lenroy Thomas for the vacant Commonwealth belt in their first fight, isn’t putting any pressure on himself. “This next part of my career is a bonus,” he said. “It’s a free swing. I started boxing at 18 because I wanted people to like me and I ended up headlining at the O2 Arena [against Lucas Browne in April, 2019].

“I’ve achieved more than I thought I would and I’ve set myself up financially. If I needed the money, I would have asked Eddie Hearn to put me on DAZN. Instead of that I’m fighting for peanuts and looking to get wins. I’m doing it my way.”

Allen – who announced his retirement this year – now believes he can be a match for Fabio Wardley and Nathan Gorman, but reckons his main target is crazy Croatian knockout specialist Alen Babic (8-0).

“I think that’s the one people want to see,” said Allen. “That’s a huge fight, it could be chief support on a pay-per-view bill, and I’m sure I can beat him if I’m at my best. I don’t know if I am still at my best. This next fight will tell me more.”

The most evenly-matched fight on the bill, however, might be Sheffield’s Central Area super-featherweight champion, Kane Salvin taking on Manchester’s Michael Gomez Jnr over 10 rounds.

The Verdict Two decently matched bouts will be overshadowed by return of the likeable Allen.