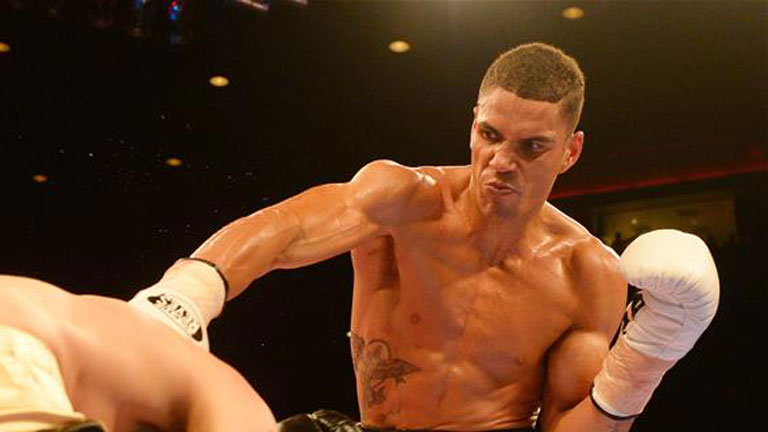 THE agony was all too familiar. After being out of action for a year, with surgery and treatment on his heels, Anthony Ogogo finally returned to the ring. Boxing on a Sauerland promoted bill in Germany in July against Ruslan Schelev he threw a right cross. The shoulder went.

“I felt it scrape against my collar bone. It came right out the socket,” Anthony recalled.

“When the surgeon went in, he said there are two threads left. If they had went, it would have went completely and it wouldn’t have gone back in the socket. I had to fight four and a half rounds against a tough Ukrainian, a strong geezer, with one arm and I won.

“I knew what I’d done straight away and I knew I couldn’t move my arm. Funnily enough the weekend before I saw Terry Flanagan fought that Mexican geezer [Jose Zepeda] for the WBO lightweight title and he did the exact same thing and he pulled out in the second round… I did it in the second round and I bit down on my gum shield and I fought for four and a half painful rounds. A tough little Ukrainian trying to take my head off and even though I only had one arm, I did that and that was only a six rounder, I wasn’t defending a world title, I wasn’t defending anything, it was just my first fight back.”

It wasn’t exactly how he envisaged his return to British television screens but, unable to punch because of the shoulder, he took a berth on the latest series of Strictly Come Dancing. “It’s not like I was taking time out of my boxing career to do this TV programme, I can’t fight, I can’t train until December, January at the earliest. It’s making the most of the time I’m out,” he noted. “I’d have traded it all in a heartbeat to be boxing in Vegas, to be boxing anywhere… I was meant to be fighting when George Groves boxed in Las Vegas, I was meant to be on the undercard, I watched it and that whole weekend I was devastated.”

“Boxing’s what I do, what I train for. Then you’ve got to dance in front of a live studio audience of 700, which is quite a lot anyway, then you’re very aware that there are cameras everywhere. It’s just mad, it’s terrifying. I’ve never danced before. Nowadays if you make a mistake or you do something silly, it’s on Youtube for the rest of your life… It’s quite a daunting experience.”

With that behind him, he now plots his return. “I was devastated with the shoulder injury, after the Achilles injury and I seem to get bad luck. I said to my team I don’t know why I get this bad luck. I go to bed at the right time, I don’t drink, smoke. I live a clean life. I train hard but I don’t train over the top. I was wondering what I’m doing. They were saying you want too much too soon. For example, Sauerland, my manager, my coach, they send me over five names to fight and I refused flatly to fight anyone, they were all too bad. I thought their records weren’t good enough or I had a little look at them on Youtube and they weren’t good enough. I thought they were rubbish and I don’t want someone rubbish, I want somebody good. They sent me another list of names and I thought no,” Ogogo said. “Eventually Sauerland sent me someone they didn’t really want me to fight because he was 11-3 with six knockouts.

“I wanted to fight him in my eighth fight, in my first fight after a year’s inactivity. So I think my biggest problem is, just through eagerness and wanting to be the best… My biggest problem is I want to be a world champion, like, yesterday. I’m kind of in a rush. To be honest I don’t really know why that is.”

Throughout his difficulties though, hope remains. He has hasn’t lost heart, even after this new injury to his shoulder. “On the plus side it’s going to give me more power. He [the surgeon] said it had been eroding away for years and years,” Anthony explained. “It would have got weaker over the years. Now it’s super strong and super solid and if I punch it’s going to be a more solid shoulder so I can punch harder basically.

“There’s light, there’s light at the end of the tunnel. It’s just that I have to go through a dark path to get there.”