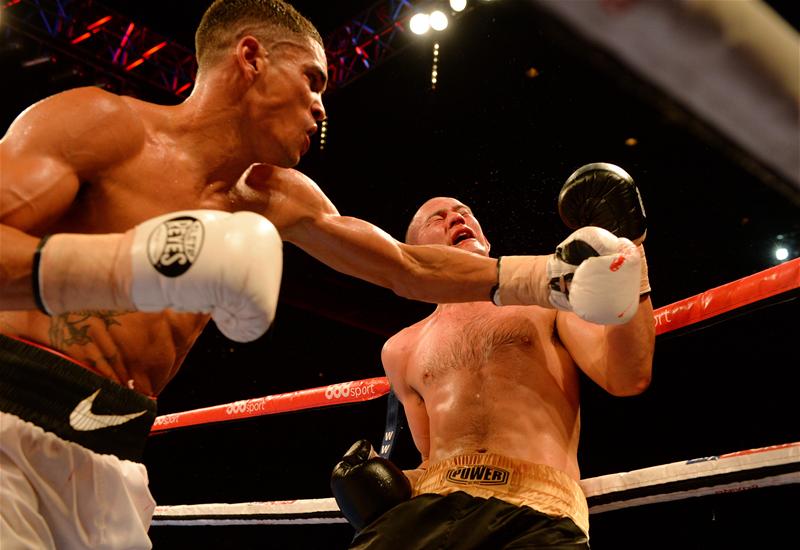 After his injury nightmare, Anthony Ogogo wants to work towards a shot at Canelo Alvarez, writes John Dennen

“AFTER the second round I put my elbow on my knee and yanked my knee up to keep my shoulder in the socket.” Not many boxers have to slot their shoulder into place as they sit on their stool between rounds. Anthony Ogogo was fighting on an undercard in Germany in July last year, and his nightmare was recurring. His shoulder had jarred out of its socket.

“Every time he threw a jab, I blocked it, it was coming out, it was agony. Every time he threw a left hook I was blocking it, it was coming out, it was agony. Yet I stayed in there, I bit down on my gumshield and you know what when the bell went for the final round my initial reaction, I was pissed off because I didn’t knock him out. I tried to knock him out. He was slowing down. If there were two more rounds in the fight I would have caught him with a left hook and I would have wiped him out and I was annoyed,” Ogogo said.

“Most guys would have pulled out, I’m being honest, the guy who fought Terry Flanagan [Jose Zepeda], he pulled out, it was the same injury. Most guys would have been happy to get through the fight. I was annoyed I didn’t win by knockout and I think that speaks volumes for how much I want it. How much I want this. I’ve been through adversity in my career, in my life and I’m sure I’ll go through some more. It’s just making me stronger, making me more hardened, making me mentally tougher. I will get there. I’ve never doubted myself I’ll get there. If anything I believe in myself more now because I’ve come through all the rubbish stuff.

“I think in life things happen to you and you can either learn from it or not. If you don’t learn from it, you’re a fool. If you don’t learn from certain bits of adversity, then you’re a bit of a fool, if you carry on making the same mistake or whatever. I’ve been there as an amateur before, I’ve had to fight with one arm because my shoulder came out and I think it held me in good stead and I learned from it. Hopefully I won’t have to go through anything like that again. However what I’ve learned from that situation is to stay calm, always stay calm. I panicked a bit, for a round I panicked. Then after that I thought you know what I’ve got one arm, I’ll beat him with one arm and then that’s what I did… Just follow the tactics and that’s what I did after round three and I won every round with one arm and it’s going to hold me in good stead when I get to the big fights.”

He remains determined to reach the top. He is promoted by Golden Boy and ultimately wants to challenge WBC middleweight Saul “Canelo” Alvarez. “This is why I wake up at five in the morning to run or this is why, when my arm’s skinny as a pipecleaner, I’m working and working to get that big and to get that strong because these are the days I want. [I want] that green belt,” Ogogo reflected. “I said to him [Canelo] that’ll be mine in two years. Me and Canelo had a stare off, a bit jovial today but that could be real in two years time and that’s what I want. Same promoter, same size, same weight.

“Obviously to get there I’ve got to work hard, get back in the ring first and foremost, I’ve got to earn my right to fight those guys, which I’m more than happy to do and when I do get my chance I’ll make sure I take it.”

His exile should be over soon. “Whenever I’m ready, they’re ready. So it’s my job to get myself ready and I’ll do everything in my power to make that as soon as possible,” Anthony said. “I know how good I can be but most people watching me against Dan Blackwell or Wayne Reed, they’ll go, ‘He’s alright, he’s pretty good.’ I want to make sure when I’m back in the ring, people are going wow, that’s a future world champion there and I want to jump on board the journey and I want to support him and that’s the level I want to get to.”

He is adamant his latest treatment will resolve his shoulder problem once and for all. “I do believe I’ve had a whole career’s worth of bad luck in the first three years of my career. However that time I haven’t been in the ring, I haven’t been sparring, I haven’t been getting beaten up, I haven’t been killing myself on the roads, I haven’t been smashing my knees up running. I’ve been a pro for three years almost. 18 months of that I’ve actually been out of the ring, that 18 months I’ve missed I’ll more than make up for at the very end of my career. I’ll get that 18 months back because of the changes I’ve made now in my training,” he continued. “My own downfall before was I used to train too hard I think, even before I was on the GB squad. Nobody trained like me, I was a maniac in the gym. I used to train too hard too much. I think that led to some of my injuries, just wanting to be the best so much. I’ve made changes where I’m a lot smarter. I know my body better. I know when to train, I know when to rein it in, I know when to push it and I think having that intelligence now around my own training, that will take me further than I would have got if I hadn’t had this bad luck and these injuries.

“There’s a positive to everything. In this time out I’ve learned a lot more about myself. It’s been frustrating but I think it’s weeded me out. I think if I was ever going to quit, I would have quit in the last two years. I’ve had some dark, dark days yet I’m still here. Not for a second has my focus wavered. I still believe whole-heartedly I’ll become middleweight champion of the world and a bloody good one as well. I know I’ve got inside me what it takes. I just need the body to enable me to go out there and show the world how good I can be.”