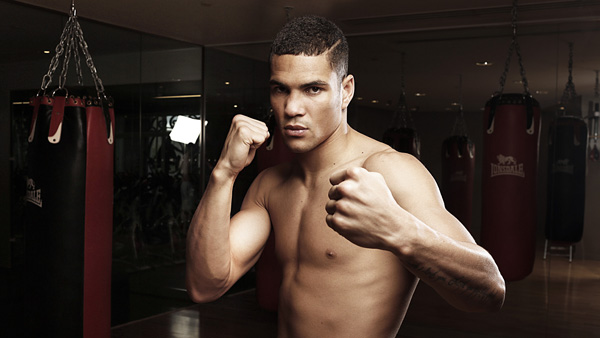 BOXING comes down to pain. Distributing it as efficiently as possible to an opponent in the ring. Avoiding it or withstanding it in the bout. Enduring the suffering of training, self-inflicted or handed down by a coach. Those are the acceptable kinds of suffering but there are worse forms of hurt, injuries that prevent a fighter from boxing. Anthony Ogogo has had to endure more than his fair share of pain.

“It’s been painful to watch guys do their thing and be unable to do my thing. It’s been really frustrating,” he told Boxing News.

The Olympic bronze medallist had an operation on his heels last September. He diligently did his rehabilitation but by the end of the year there was still no improvement. In January he was forced to undergo a second operation. “The problems were a lot more significant than the first surgeon thought. I haven’t really had any time off. For two and a half weeks I wasn’t able to walk, do anything, so they were dark days,” Ogogo said.

“Mentally I’ve been working over time, thinking how can I compensate for not being physically able to do the exercises. So I haven’t had a break. I’m on it, I’m ready to go. Mentally I’m hungrier, and more mentally prepared and mentally stronger. Because when you can’t do something you love so much, you just get stronger. Mentally I’m a lot more prepared than I ever have been.”

He wishes he could get back to the normal pain of a boxer’s regular life. “When people whinge about waking up in the morning at six o’clock to do their run, in the last six to 12 months, I’d give anything to wake up in the morning then go do a run. If I’d always been able to run I wouldn’t feel like that but because I can’t do it, it’s made me so much hungrier to get up and do it. I’m quite a positive person all round. I try to look at the positives in each situation and I think the positives in this one are I’ve missed a period of time developing as a boxer but what I’ve been doing in the meantime, I’ve just been getting stronger mentally, more mentally hardened and tougher. When I am back in the ring, the physicality stuff, that can catch up, the boxing technique, all that can catch up. I can catch up on that. It’s that mental toughness, if you don’t go through adversity mentally, you can’t [get it],” he said. Ogogo believes his struggles, as much as they have been tormenting him, could help him in the long run, saying, “You can’t put your mind through something that it’s never been through before. I’m in a good place. I’m desperately looking forward to getting back in the ring, back in the gym, doing boxing training.”

He’s been forced to wait so tissue in his heels can regrow without being damaged once again. He is planning to box by the summer and then stay active. “I’m looking to have three, four, five fights before the end of the year. If I can have all them all in England, great. It is nice to go to America and fight there now and then but I’m British,” said Anthony, who signed with Golden Boy Promotions and Oscar De La Hoya after London 2012. “Oscar said when he turned pro he boxed every month, that’s the only way to learn, to get better, to stay sharp. I want to be boxing every month,” Ogogo said. “He [De La Hoya] basically wants to start again, like a new start, be really hands on.

“I see Billy Joe Saunders and [Chris] Eubank fighting and I’m frustrated that I can’t be fighting them. I see Martin Muray fighting [Gennady] Golovkin and I’m well proud of him, he did an unbelievable job and I’m thinking to myself I want to get in the gym and learn from his mistakes so that when I fight Golovkin in four years time I beat him, I’m the first person to beat him,” the Lowestoft middleweight continued.

“I’m a million miles away from that now,” he added, “I’m not for a second saying I would have done a better job than Martin Murray.”

But he lamented, “I’m seeing potential opponents box and do well, it’s good for them they’re doing well but I can’t even go in the ring and be inspired by them doing well. Normally if I go and see Eubank Jnr fight and think he fights well or think he fights poorly, I use that as inspiration to go in the gym and think right I want to do this better because I want to fight him one day. He’s fighting Billy Joe Saunders, he’s been fighting [Dmitry] Chudinov and I’m at home basically doing nothing because I can’t go out and train, I can’t use that performance to inspire me to be even better.”

He will however take inspiration from watching Danny Jacobs box this Friday (April 24). “Obviously having cancer, it didn’t do his boxing career any good whatsoever. It took a long time, a year and a half out the ring because he had cancer – I watched a documentary about Danny Jacobs because he’s my weight and a potential rival in two or three years time, I look up to him as well for being a champion – but what it did do, it hardened him. He’s overcome cancer, what I’ve done is nowhere near that, I’m not saying that whatsoever, he’s overcome probably the worst adversity you’ll ever have to overcome. So when he’s in the boxing ring, and if he has to fight Golovkin and he’s getting whacked round the body and his head aches, his body aches and it hurts, he knows that he’s overcome cancer. He can dig in and think, ‘I’m here for a reason. I know why I’m here. I’ve overcome cancer. What’s Golovkin? Golovkin is a great champion but I beat cancer.’ So he’s not going to be overawed by the prospect of facing Golovkin. Similar to me to a much less degree. I’ve overcome a couple of big, big injuries… I will be back better than ever before. So I’m not bothered about opponents. I’ve taken a lot of confidence from that. Danny Jacobs had 19 months out. He came back and won a world middleweight title. I’ll be out for a year and I’m still young. I’ve still got bags to learn,” Ogogo said.

“I just want to show everybody that I can do it, I can be a world champion.”