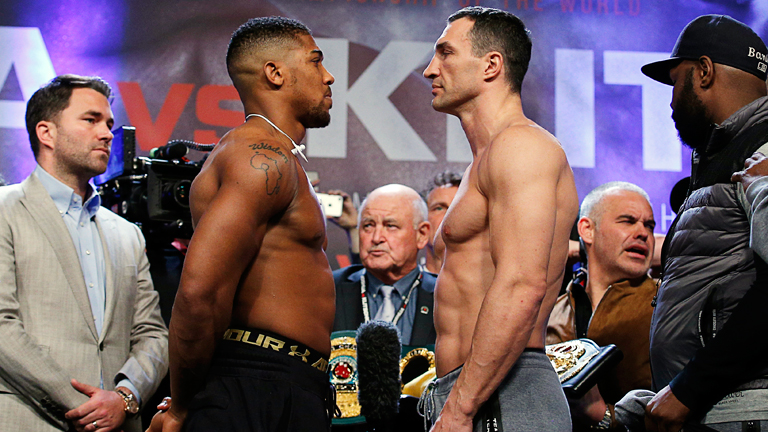 Anthony Joshua and Wladimir Klitschko hit the scales, suggesting perhaps that one has been training for power, the other for mobility

WLADIMIR KLITSCHKO calmly took to the stage in front of thousands of fans at Wembley Arena to weigh in for his IBF and WBA heavyweight unification clash against Anthony Joshua.

Klitschko, who has been inactive for nearly a year and a half since losing to Tyson Fury in Germany, is now the challenger. He scaled 240 1/4lbs, the lightest the 41-year-old has been since 2009. That suggests he has been training hard and surely working to maximise his speed and mobility in order to deal with the younger man.

In contrast Anthony Joshua reached his career heaviest, 250lbs, one pound above his weight in December when he knocked out Eric Molina in Manchester.

That suggests Joshua has continued to train for power. That’s been a hallmark of his short professional career already. Of his 18 pro contest, Joshua has finished all 18 inside the distance.

Click HERE to watch the Anthony Joshua-Wladimir Klitschko weigh in.